The sounds of the forest engulfed me as I stepped over rocks and carefully wedged my feet in between tree roots on my way up a steep trail. Above, a fallen Sitka Spruce tree trunk creaked and groaned in the wind. I passed by a decades-old abandoned sawmill consumed by the ground. Rusted tools stuck out of the dirt. Chirping birds echoed their songs through the river valley. In its thundering and roaring glory, the Taiya River guided me in the direction of my campsite for the night at Canyon City. Surrounding me were signs of a living trail with a beautifully rich history. 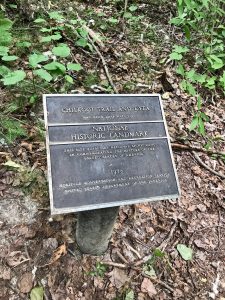 The Indigenous History of the Chilkoot

These were only a few of the things I encountered as I hiked the historic Chilkoot Trail out of Dyea, Alaska with two of my coworkers, Sarah and Kristen. The Chilkoot overlies the ancestral lands of the Tlingit people of Klukwan and the Athapaskan people of the Yukon First Nations.

The Tlingit people cared for the trail and fiercely guarded its use against not only European foreigners but also indigenous groups from nearby regions. This was to maintain both responsibility and control over the route. Annually, they would make a journey into the interior with dried fish and eulachon grease, Chilkat blankets, cedar boxes, spruce root baskets, and traded European goods, and return to the coast with copper, tanned moose and caribou hides, beaver, lynx, and fox pelts, prepared skin clothing, and the goat skins and lichen needed for making and dyeing Chilkat blankets.

Trade was crucial for maintaining relationships with other groups and guaranteeing wealth and abundant resources. Trips were typically made between April and late June and were meticulously planned through ceremony and preparation. This changed significantly with the start of the Klondike Gold Rush.

1898: The Chilkoot during the Gold Rush

When word spread to the lower forty-eight that there was gold in the Klondike, people immediately began to scheme the fastest way to get there. For those with money, traveling up the Yukon River was the easiest and most comfortable option. But the most common route to the Klondike was to take a ship to Southeast Alaska, travel overland to the Canadian interior, and then float down Lake Lindeman to the Dawson City gold fields.

The Chilkoot trail leading out of Dyea was the most common route that stampeders took because it was shorter than the neighboring White Pass trail and was already stewarded and well-known by Tlingit people, who worked as packers within an exploitative Euroamerican capitalist economy. In the aftermath of the 1949 California gold rush’s notorious scurvy and starvation, the Canadian Mounted Police required that stampeders have with them a ton of goods – literally, two thousand pounds – in order to cross the border. To make this journey with their luggage, they would have to shuttle crates of supplies back and forth between short intervals along the trail, turning a 33-mile trek into one of over a thousand miles. 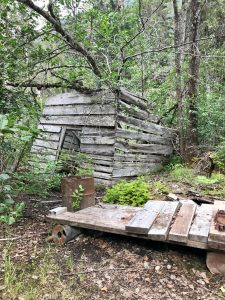 Most were unprepared for the treacherous conditions of hiking through an Alaskan winter, with several deaths in the famous Palm Sunday avalanche just before the Golden Staircase. You are likely to see icons of stampeders climbing the Golden Staircase at and around Klondike Gold Rush NHP: it’s one of the most famous and easily-recognizable images of the 1898 gold rush.

All along the trail, I could feel the ghosts of those who walked it before me. The Tlingit leaders carrying heavy packs on their backs filled with goods for trade, and the weight of excitement of a potential marriage in the family to solidify ties to a Tagish family. Jack London, the same age I am now, feeling the aches of scurvy in his bones and telling stories to his fellow travelers around a campfire. A woman on the run from the shackles of Victorian-era gender roles, hoping to stake her own claim in the lawless frontier town or even start her own business and become financially independent. An old mining veteran from the California Gold Rush, writing a letter home to his wife under the Northern Lights. The same way that I write in my journal on the banks of the Taiya River after a long day of hiking, scribbling pages to tear out and send to my friends back in the Lower 48.

But it would be naive to assume that the trail will stay like this forever. The truth is, the trail, and many of its artifacts and historical markers, are under significant threat from climate change and global warming. As the average temperatures in Southeast Alaska become more extreme, glaciers accumulate lots of snow during the winter and melt quickly during the summer. This causes water levels to rise, threatening to wash away remnants of the trail – and even the trail itself. In addition to river channel instability, other warming threats include early snow melt, melting ice patches, and glacial outburst floods. Caitlin Rankin, George Melendez Wright Young Leaders in Climate Change intern at Klondike Gold Rush National Historical Park in 2016, writes:

Some of our park’s most valuable cultural resources are located along the trail and have been preserved by favorable environmental conditions. As our climate warms, conditions that have been stable are beginning to change. A warmer, wetter climate presents a number of threats to archeological resources; these factors build upon one another, intensifying their effects and destroying sites faster. Archeologists must adapt and find new ways to cope with these changes to ensure valuable resources are not lost forever.

Some of the work happening at Klondike right now includes saving a false-front building from the historic Dyea boomtown. It is going to be relocated because of potential river flooding in the summer of 2022, which puts it at immediate risk of being washed away by the river. This is not ideal. In a perfect world, historical artifacts and buildings would remain right where they were placed originally for visitors to experience as authentically as possible. But given the circumstances, the best possible option is to preserve history in the ways that we can. 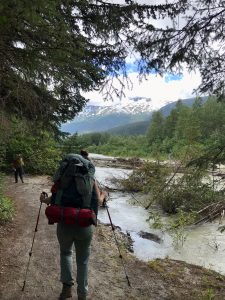 As my group hiked up towards Canyon City, I saw in person just how close we were to the water. I could both constantly see and hear the splashing of the water up against the side of the trail as I wondered what a hike along the Chilkoot might be like in 100, 50, or even 15 years (or if it would even be possible) if, as a species, we failed to take action against climate change. But I have faith.

As a hiker, history enthusiast, and general appreciator of beautiful places and things, the opportunity to walk the Chilkoot as a part of my job was a dream. As my group and I headed towards Dyea, we came across fresh bear tracks in the sand and a pile of scat. Sarah leaned over and held her hand over the scat. “It’s still warm,” she declared. 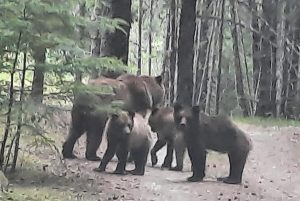 There, I was reminded that this space in the Tongass does not belong to me, or to the National Park, or to America or Canada, or to any of us individually. It belongs to the bears and the beavers. It belongs to the Tlingit and Tagish people. To the Sitka spruces and to the monkshood and to the wild blueberries. To the Taiya, to the boulders, and yes, even to the mosquitoes. To them, I am simply a neighbor and a guest. I tread carefully on the land that preserves a vivid history.