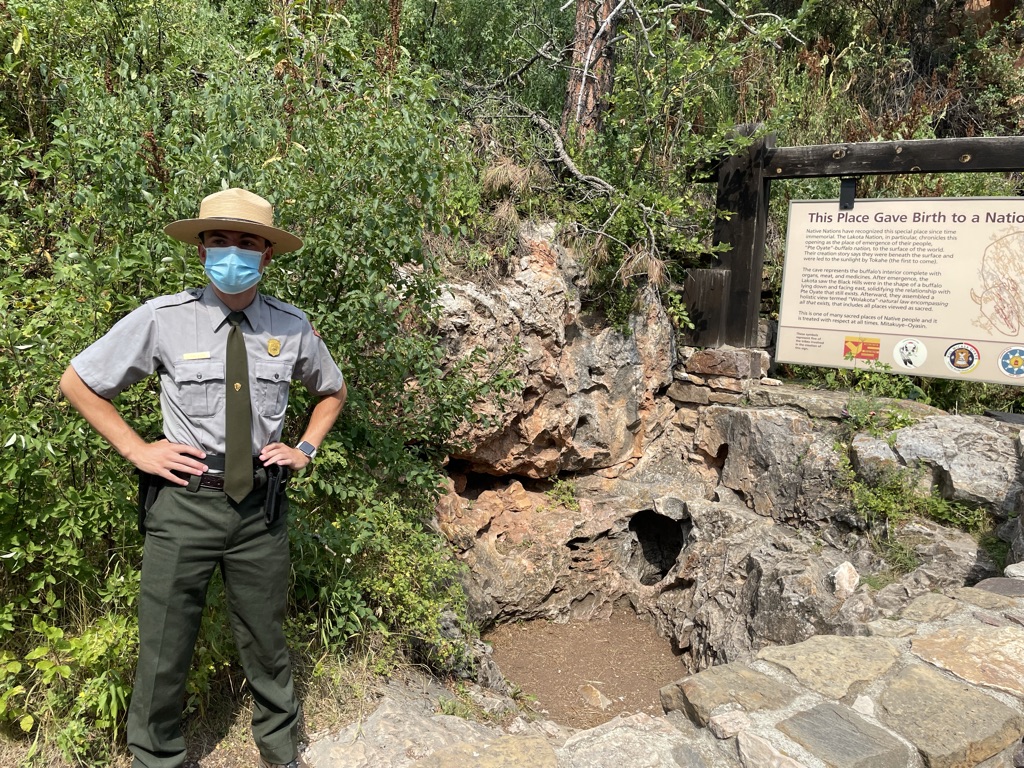 Posted at 17:50h in #LHIP2021, NPS WASO Office of Communications by Nicole Segnini 0 Comments
1 Like

But first, I want to share a little bit about Wind Cave. Located in South Dakota, the cave is one of the longest and most complex caves in the world, and the first cave designated as a national park. Named for barometric winds at its entrance, the cave is home to boxwork, a unique formation rarely found elsewhere, composed of thin calcite fins resembling honeycombs. We went in through a man-made entrance and walked about 2/3 of a mile, with 300 stairs. It was a bit chilly and slippery, but the handrails throughout the tour helped us not fall. During our tour, we also saw the cave’s “popcorn”, which are small, knobby growths of calcite on the cave walls.

Indigenous peoples of the area have known about the opening to Wind Cave for centuries. However, the first recorded “finding” of Wind Cave was in 1881. Jesse and Tom Bingham were attracted to the cave by a whistling noise. According to the story, the wind was blowing out of the cave entrance with such force that it blew off Tom’s hat. A few days later when Jesse returned, he was surprised to find the wind had switched directions and his hat was sucked into the cave and he never saw the hat again! Then, about 9 years later, came Alvin McDonald. He moved to Wind Cave in 1890 after his father was hired by the South Dakota Mining Company to oversee the company’s “mining claim”. Alvin fell in love with the cave and he explored about 8-10 miles of passageways.

Now to my favorite part of the history of this cave: its spiritual significance in Lakota culture. Wind Cave is a culturally significant and sacred site to the Lakota and Cheyenne and to at least 20 different native tribes that traveled in and around the area that would become Wind Cave National Park. The cave is the location of the Lakotas’ (indigenous tribe) traditional origin story, part of their larger creation story. Lakota oral tradition speaks of how the first bison and humans emerged from this deeply spiritual place… and from a small hole, which is the cave’s natural entrance.

During our cave tour, our interpreter, Logan, did an amazing job reciting such an interesting story.

It talks about how the Lakota people lived underground until they were allowed to emerge onto the surface of the Earth. There are many different versions of The Emergence Story, varying from band to band and family to family. In Lakota culture, culture and history are passed down through oral tradition and spoken word. This version comes from the Cheyenne Creek community on the Pine Ridge Indian Reservation of the Oglala Lakota tribe. The story was told by Wilmer Mesteth, a tribal historian and spiritual leader, who passed away in 2015. Mesteth told this story to Sina Bear Eagle, a staff member at Wind Cave and a member of the Oglala Lakota tribe.

According to this story, not only were the first Lakota people born from Wind Cave, but the first bison came from the cave as well. In fact… the first herd of these wild animals was first a group of people who disobeyed The Creator and were punished, hence becoming a herd of bison.

You should watch this video to learn about it.

If you can’t, this is the story, as told by the Lakota oral tradition (found on that link):