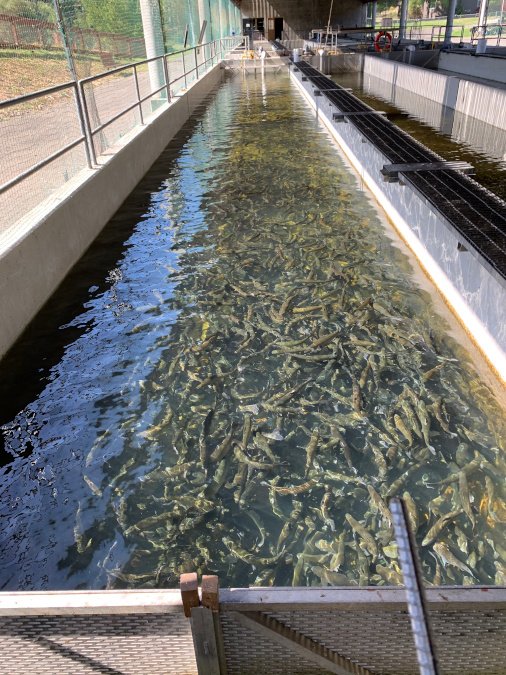 19 Jul Why Care About Salmon Conservation? – Ecocentrism and Anthropocentrism

Like the transformation of a caterpillar into a butterfly, the salmon run is one of the most well-known and bizarre life history stories in all of nature. A young coho salmon lives her first year quietly in a shallow, shaded forest stream, feeding on tiny aquatic insects.

Roughly a year into her life, she undergoes a radical process of physical changes that modifies everything from the composition of her skin to her metabolism to the enzymes in her gills. The coho then voyages downstream, leaving behind the safety of these shallow woodland streams in favor of the perilous bounty of the open ocean. The following year and a half at sea allow her to feast and grow from something that could be mistaken for a minnow into the meaty two-foot fish that we think of when we hear the word “salmon.” Then, at about three years old, she navigates out of the sea with scores of her kin, journeys to the stream of her birth, spawns, digs the next generation a safe gravel redd like the one she was born in, and then promptly dies.

This incredibly specific set of behaviors ensures safety as a juvenile and bountiful resources for adulthood. Even the salmon dying en masse after spawning serves a key purpose by introducing oceanic nutrients into the stream that increase the survivorship of the newly laid eggs. And while it’s not accurate to anthropomorphize evolution, driven as it is by random mutation and natural selection, there is something preternaturally clever about the complex way that a salmon lives its life.

Clever, that is, until you add humans to the mix. Swimming to upstream spawning grounds is rendered useless and impossible when a river is dammed and there are no upstream spawning grounds to speak of, and the relative safety of a stream is rendered dangerous again when the vegetation that shields the catchment is cut down for lumber and a slew of fertilizers, metals, and petroleum hyrdocarbons seep into the water.

In California, the coho salmon is now considered endangered – multiple estimates put the natural population at around 1% of its historical size. An anecdote from the head of a California-based salmon monitoring program puts this decline into perspective: “We were seeing less than ten adults returning [from the ocean to the watershed], when years ago there were thousands.”

For many, reading this may prompt a big “So what?” A cool life history story and a sad population decline may not equate to a call for action for a lot of people. In a daily life that is increasingly disconnected from nature, it can be difficult to care about an endangered fish you’ve never seen and to think it’s worth spending money to save.

That simple question – “Why do we care about endangered species?” – is at the heart of an ongoing debate in conservation biology. Some argue for the intrinsic value of nature and biodiversity: in the same way that the roof of the Sistine Chapel is beautiful and has an intrinsic value worthy of preservation, so does the natural world around us. Surely, even though the life of a salmon obviously has less value than the life of a human, these beautiful and unique creatures must have some value in and of themselves. The appeal to the bizarre, wonderful life history of the salmon at the start of this article is an example of just this kind of ecocentric view.

Others argue that this intrinsic value is just not quantifiable; in order to convince people that something needs to be conserved and protected, it needs to have monetary value. This decidedly more capitalist anthropocentric has led to much discussion of “ecosystem services,” which are the direct, economically quantifiable benefits that nature can provide to human beings.

In the case of salmon, it’s not hard to think of what that benefit might be. Simply put, the fatty meat of a healthy salmon tastes good. When populations were thriving, the coho industry in California alone was worth more than $70 million a year. That number is now zero. If conservation programs could one day return populations to healthy levels and fishing could be regulated according to maximum sustainable yields (i.e. limiting fishing such that the population would not be smaller the next year), then coho could be removed from the Endangered Species List and much of this money would return.

But salmon offer far more than simply a satisfying meal. Their strange life history brings rich nutrients from the ocean onto land; trees where salmon runs take place may gain up to 25% of their nitrogen from salmon. Furthermore, during its peripatetic life, a salmon may become food for any one of over a hundred different animals, from eagles to otters to orcas. All this makes salmon an ecological bedrock underpinning not just the ocean, but streams, estuaries, and coastal woodlands as well.

However, it is dangerous to rely on ecosystem services as an argument for conservation. By definition, this system places more value on species like salmon, who have appreciable monetary value, than those that don’t. It also leaves the door open for cheap technology to replace the role of biological life in supplying these services. But for many, conservation can be seen as disconnected; some would argue that the ecocentric argument of intrinsic value simply has no bearing on an anthropocentric world. Those who see salmon as an item in a supermarket, rather than a beautiful and unique creature, would be unconvinced by somebody telling them of its intrinsic value. Perhaps it’s best, then, to convince them through the language of money: the salmon is not just an item on a plate, it is a renewing resource that can have greater long-term yields if its harvest is properly controlled to avoid declines and extinction.

The state-of-the-art facility pictured at the top of this article is the Warm Springs Hatchery, where a program is underway to increase coho numbers in a central Californian watershed where they were all but extinct. This sprawling hatchery raises thousands of fish and reintroduces them into local streams in a program carefully designed to reduce genetic contamination and competition between the hatchery-raised fish and the struggling natural population. Some might decry this as a waste of time and money – expensive invasive procedures to save an animal already on its way out. But perhaps, with an eye on ecosystem services, they can be made to see this as a long-term investment that will one day pay off in the form of healthier, more productive, and more lucrative streams, woodlands, and seas.