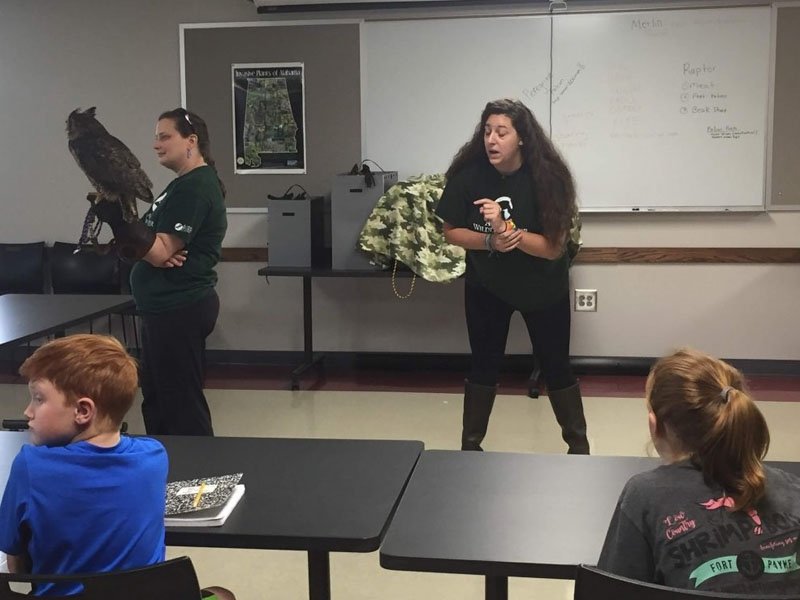 This week is my first full week that I have been at the park helping out,and it has been a pretty eventful week! At first It was a pretty slow week, because Monday and Tuesday I was at the front desk just helping visitors with directions, giving brief tours of the building, and enjoying the air conditioning while also sharing fun and embarrassing moments with the volunteers and employees of the park. And while Wednesday and Thursday were my days off, everything started to pick up speed right after I walked in the door when I was invited to sit in during a class to see people coming from a bird sanctuary and the birds they had to offer.

While I had missed part of the lesson, I was there just in time to see the beautiful owls they had brought from the bird sanctuary. They had a Great Horned Owl that looked really big for a bird, but only weighed about three pounds. They taught about how it could take down larger prey easily, and then they proceeded to bring out their next guest which was a Barred Owl. It was a beautiful animal in a sad condition.  It couldn’t fly not because it had anything wrong with its wings but because it had something wrong with its eyes; the poor thing had cataracts to the point it couldn’t see well enough to fly. But it was being taken well care of at the sanctuary, and afterwards the people from Jacksonville State University brought out snakes to show the kids. That ended my Friday in a well air-conditioned building, then everything started getting hotter the next day.

Saturday, due to the popularity of the swimming holes and waterfalls in the park, people were coming from all over the Southeast, and maybe even the world, just to swim. And as a result, I was put on parking lot duty. While most people would think of this as a terrible day, my imagination helped to give me a brighter outlook because “the problem is not the problem, the problem is your attitude toward the problem” ~ Jack Sparrow.

So every time the lot became full, I became the gate keeper to the fountain of youth and, while I did turn cars away and I felt bad for them, I would utter “You shall not pass” under my breath just to liven things up a bit…and that closed out my weekend!