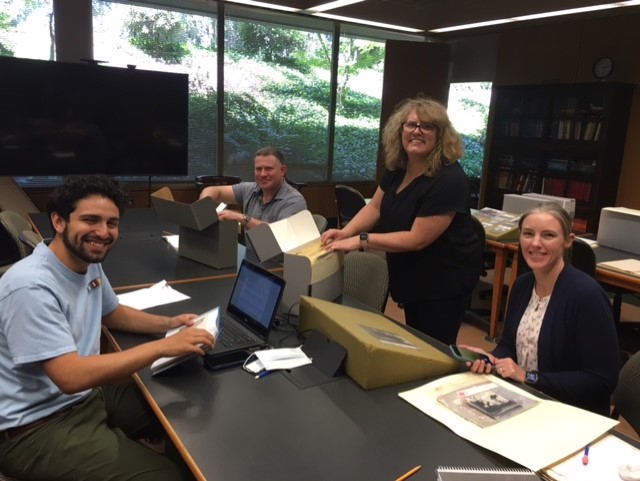 Back in June, my supervisor Gretchen and I met with Mike Wurtz, an associate professor at the University of the Pacific. Mike and his colleague Bill Swaggerty teach classes in California history and oversee John Muir’s family archives in the university’s library.

This past week, I got the opportunity to visit the University of the Pacific for a day with some other staff at John Muir National Historic Site. When we arrived at the library, Mike took us into the Muir Center, which houses John Muir’s impressive collection of books throughout his lifetime.

After an orientation, we headed downstairs to the university’s archives, which house John Muir’s original manuscripts, journals, drawings, and other writing. Although I had seen much of the collection, which is digitized online, I got the unique opportunity to handle the more than century-old documents from Muir’s lifetime. I was very impressed at the work Mike and Bill have done to preserve Muir’s legacy. Much of the handwritten journals are faded and difficult to read, giving me a greater appreciation of the transcription work done by archivists.

The most enriching part of the day came via a chance encounter in a manuscript from Muir’s thousand-mile walk to the Gulf of Mexico. Kelli, our chief of interpretation, noticed a crossed-out section of Muir’s original manuscript that did not make it into the final published work. The omitted quote spoke to Muir’s idea of the brotherhood of man, in which he claims that all races of people are inherently equal due to their shared humanity. Because the book was published posthumously, it was unclear whether or not Muir purposefully made this edit or if his editor left it out intentionally. In either case, exploring the original documents showed me how biases play a role in our interpretation of history.