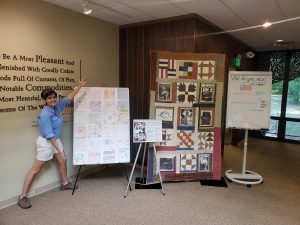 Although Fort Raleigh NHS may not receive as many visitors as Cape Hatteras NS or Wright Brothers NM, we still value the participation of our guests. When I arrived to the park in the middle of May, the visitor’s center already offered guests a way to contribute to the park with an activity that asks them to submit their ideas as to what may have happened to the lost colonists of 1587. People take a great liking to this activity as it not only allows them to be creative but also to contribute to the narrative at Fort Raleigh. We receive a variety of responses, which range from comedic to realistic to crude, with some being put on display for guests to view. Because of this popularity, I realized that I wanted to create more opportunities for guests to contribute to the interpretation here at the park. 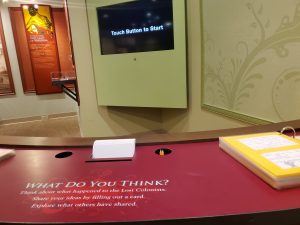 While working on my assigned projects, I took it upon myself to utilize my free time by developing other ways in which visitor’s can get a hands-on learning experience here at the park. Initially this was simply intended to help gather interest for the Freedmen’s Colony programs, but soon developed into a desire to contribute something to the park that can continue to be utilized after I leave. My first attempt at utilizing guest contributions to add to the site’s interpretation was when I began to ask visitor’s what they value before giving programs on the Freedmen’s Colony. This method, while gathering many responses from visitors, is not the same quality of interaction as the lost colony response submission, and so I decided to create a different approach to gathering interest in the Freedmen’s talk. 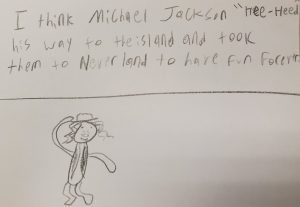 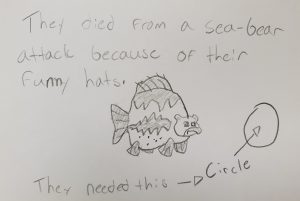 Because we were displaying a commemorative quilt created by descendants of the colony during the month of June, I decided to create an activity centered around it. The quilt has squares that demonstrates the legend of the “secret code” quilts utilized in the Underground Railroad, as well as images of people who have direct ties to the colony. The activity I came up with initially asked guests to design a quilt square that gave someone directions or important information without using words. Then it was suggested by ranger Tiffany to add a second option of designing a quilt square in honor your family or ancestors. With both of these choices available, the activity was well received by guests and we were given dozens of submissions each week. We displayed the best ones in the visitor’s center for guests to see and be inspired by. 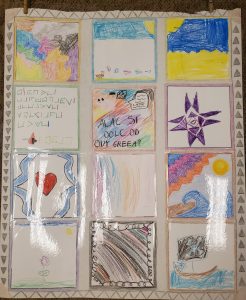 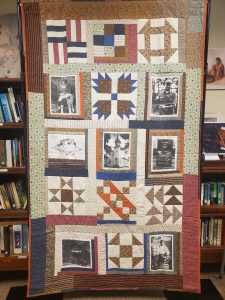 Once June ended and the quilt was packed away, I realized that I really enjoyed developing pop-up activities and wanted to add another for Fort Raleigh to use, so I designed one for the month of July. Because our nation celebrates Independence Day on the 4th, I wanted to tie the symbolism behind the flag into the next activity. While I could have simply created an activity that revolved around our national banner, I wanted to include other symbols found at the fort in the pop-up. With that, I designed an activity that not only educates but also checks the visitor’s understanding of our history through its interactive experience. After visitors read information on the meaning behind common symbols and colors, they are asked to help design a symbol for Ft. Raleigh based off of the information they have learned from the museum, video, or program. Most guests design symbols around the 16th century history of the park, but we have seen others that include the military and Freedmen’s history as well. Each day we receive creative submissions, and like the quilt square activity, we put the best ones on display for visitors to admire and be inspired by.