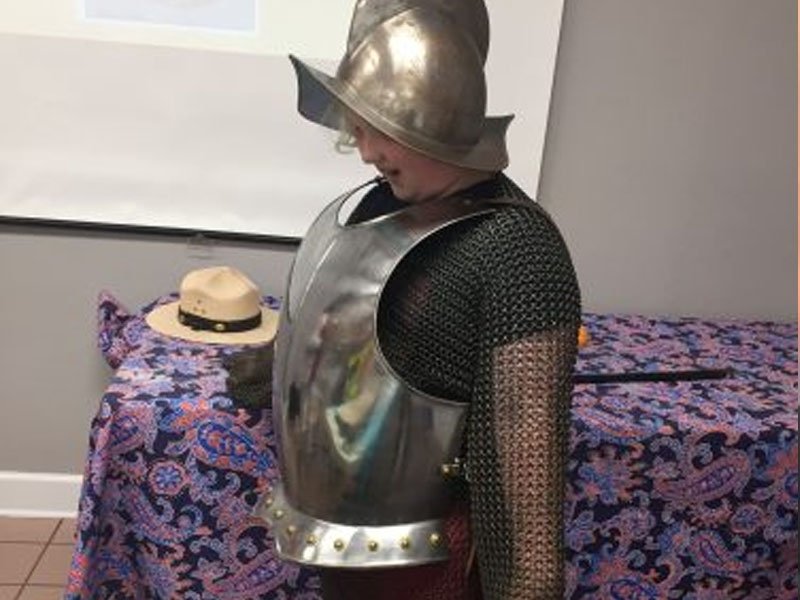 17 Jul The Tears and DeSoto

This week was an easy week and a new experience for me. While I was at the front desk for most of the week I also had the opportunity to go outside of the park and make bonds with some of the young local kids. Larry and I went to a nearby town called Rainsville, and had a class for little kids about DeSoto and also delved deeper into why Little River Canyon is such a great historic site. Larry told them all about how Little River Canyon was full of history from different events such as The Trail of Tears and DeSoto’s expeditions, and while I had heard of all of these during school hearing it from a ranger opened my eyes more than it did in high school.

In town, there was an old cabin used during the Trail of Tears but all that is left of it is an old chimney, and down the road a few miles is DeSoto State Park which probably took its name from the explorer. During the class, I learned a lot about the explorers, from their armor and gifts to the natives to the punishments and the brutality that the natives faced from being cut by the swords of the Spanish. I also heard of a story where the Spanish had actually tricked the Native Americans into converting during a drought. The story goes that when the Spanish came up to the natives, who had suffered from a terrible drought and were desperate for rainfall, when the Spanish got there they noticed that a cloud was coming in their direction and told the natives that if they were to convert the rain would come…and they did and were so fascinated by the rain that they remained Christian. I know it may seem far fetched, but it has some possible evidence because two years ago there was a huge drought to the point that nobody could even grill just because of the possibility of it turning into a fire and the waterfalls here were all dry to the point you could walk down into it and the bottom part of the falls is about 40 feet. The kids also learned about the Trail of Tears and what were some of the contributors to it. Another thing I got to do was go around and just talk to people in some of the popular areas of the park; many were really nice to the point that they were offering me food and they were so nice when they would offer that I felt terrible when I refused it. The people were really relaxed when I would walk around and would make great conversation. Some told stories of when they were younger and how the place had changed for the better, while a few were frustrated that they couldn’t jump off the waterfall into a rocky bottom anymore.  While the negative people were upset, I found it as entertaining to see them because it changed the rhythm of things from calm and docile into interesting. But all them were very polite and seemed to understand the safety precautions that the Preserve had put in place to help save lives.