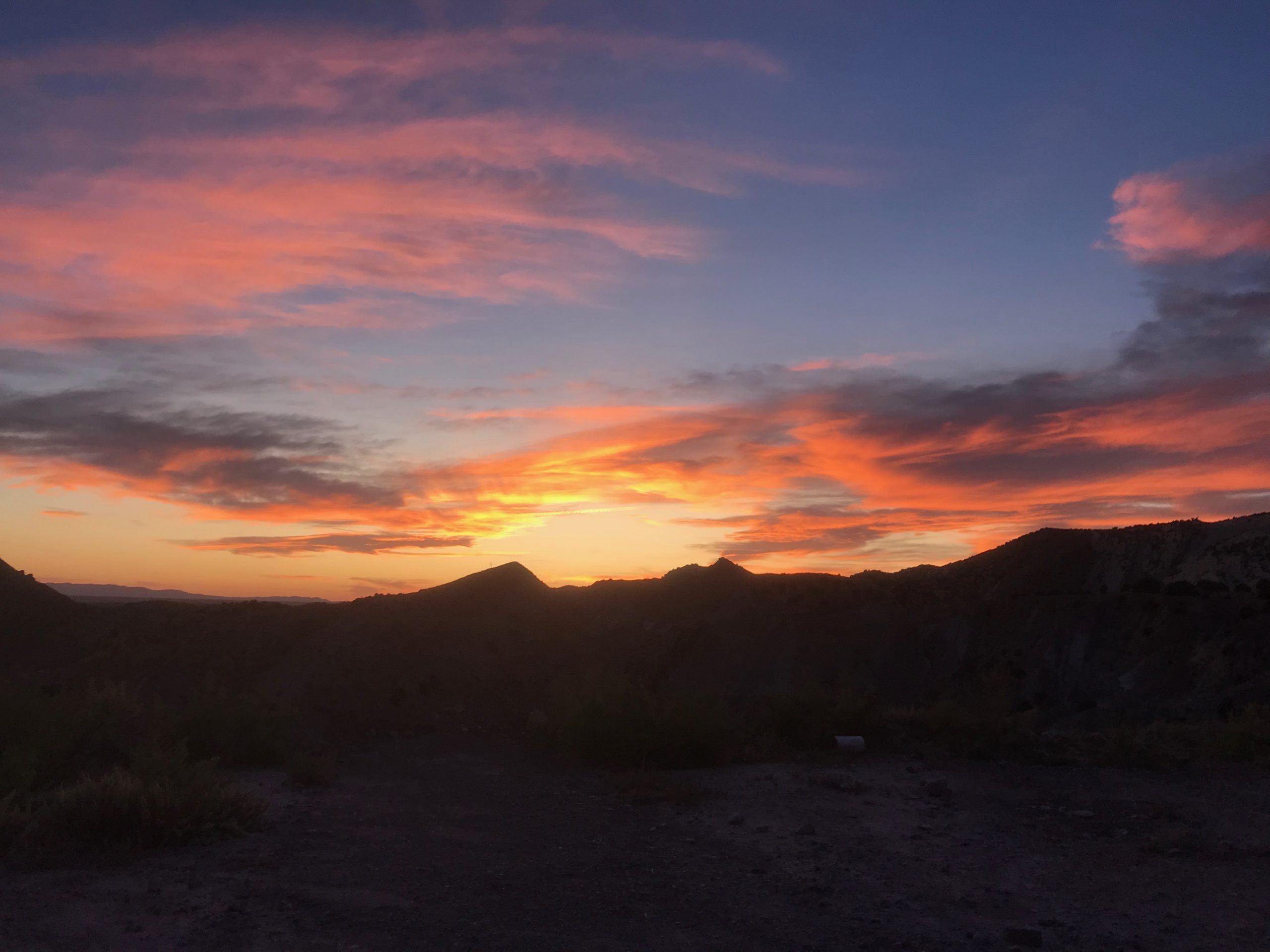 11 Oct The Sun Sets on My Internship

On the last day of my LHIP internship at Dinosaur National Monument, I want to share some of the results of my work on monarch butterflies. First, in my field work this summer and fall, I saw around 300 adult monarchs. These high numbers have suggested that the monarchs in this area might be part of the eastern monarch population that migrates to Mexico rather than the western population that goes to California. The California migrating population is currently so small that all the monarchs I saw this summer probably aren’t part of that population. To prove this hypothesis, we need a tagged monarch from the area to be sighted at an overwintering site in California or Mexico. My Dinosaur colleagues and I caught, tagged, and released 151 wild adult monarchs for migration research with the Southwest Monarch Study. Unfortunately, none of the tagged monarchs have been recovered elsewhere to date (though we recaptured several of our own monarchs in Dinosaur days or weeks later). I hope to receive news later this year that one of our monarchs was seen again. When catching monarchs, we also sampled them for parasitic infection by removing some of their scales with a sticker. We will send 116 samples to Project Monarch Health at the University of Georgia for analysis of infection intensity in our monarchs.

My field work also consisted of surveying milkweed plants and monarch populations in Dinosaur and around the local area, including on federal, state, and private lands. My surveys also consisted of Dinosaur’s first ever river-based survey for monarchs and milkweed. In total, I found over 100 monarch eggs and over 100 caterpillars at the various milkweed sites that I visited. I sent 146 data sheets about my surveys to the US Fish & Wildlife Service via a tablet app. The data I sent will help USFWS determine whether monarch butterflies need to be listed as an endangered species. Further, since there had been limited monarch research in this area prior to this summer, my work was new and important to USFWS.

When I wasn’t doing field work, I was working on science communications. In addition to my blogs, I wrote some social media posts about monarchs that you can find on Dinosaur’s Facebook page. I also helped plan and administer a number of educational programs this summer: a public monarch tagging event, a middle school field trip on monarchs, a public presentation of my research, and two middle school presentations. While in the field, I also made informal, unplanned contacts with about 100 Dinosaur visitors. I think that each person I interacted with this summer learned a bit about monarchs, and I hope many of those people will become monarch citizen scientists.

To end, here’s a few more things I learned this summer. They aren’t necessarily about the best way to catch a monarch or how to identity monarch caterpillar chew marks on a milkweed leaf, but I still find them interesting and important.

National park service staff and volunteers are the nicest people around

When you put on the name badge in a National Park, people will talk to you. So much

I think people are really curious when they visit a National Park. Further, anyone with a name badge or park service uniform is viewed as an interpretive ranger who can answer any and all questions. A few times as I was just walking through the campgrounds looking for monarchs, I was asked pretty specific questions about camp site logistics. Of course, I had to answer that I had no idea. At Josie’s Cabin in Dinosaur, where I did a lot of my monarch work, I would be asked about where to find hiking trails and petroglyphs. Mostly though, people asked me what in the world I was doing when I was wielding a butterfly net or intently studying milkweed leaves. I’m so glad to have had the chance to talk informally with so many visitors. I got to show people monarch eggs, caterpillars, and butterflies. I told people about the research I was doing and anything else they wanted to know about monarchs. Since citizen science is so important for monarch research, it is really important that as many people as possible are keeping an eye out for monarchs and reporting their observations.

Most everyone knows something about monarch butterflies

“Ah, they go to Mexico, right?” “Don’t they need milkweed?” Or people have had some experience with them. “My aunt counts them in Minnesota,” “I’ve seen caterpillars in my garden,” “I used to see a lot of monarchs when I was a kid but now I don’t see them,” “I once collected a monarch caterpillar, put it in a jar and let it pupate, and when it emerged while I was at school its wings got damaged from being in the tight jar all day so I found a dead monarch on the front of my school bus, cut off its wings, and glued them on to my monarch and it took a second to figure them out but then it flew off” (Shoutout to Dinosaur’s quarry exhibit hall shuttle driver for telling me that wing transplant story, which is obviously my very favorite)!

Thank you to everyone at the LHIP program for this opportunity to work with the National Park Service and study monarch butterflies. Thank you also to my supervisors at Dinosaur National Monument (plus all the staff there) and the many other people in the local area who I worked with this summer.