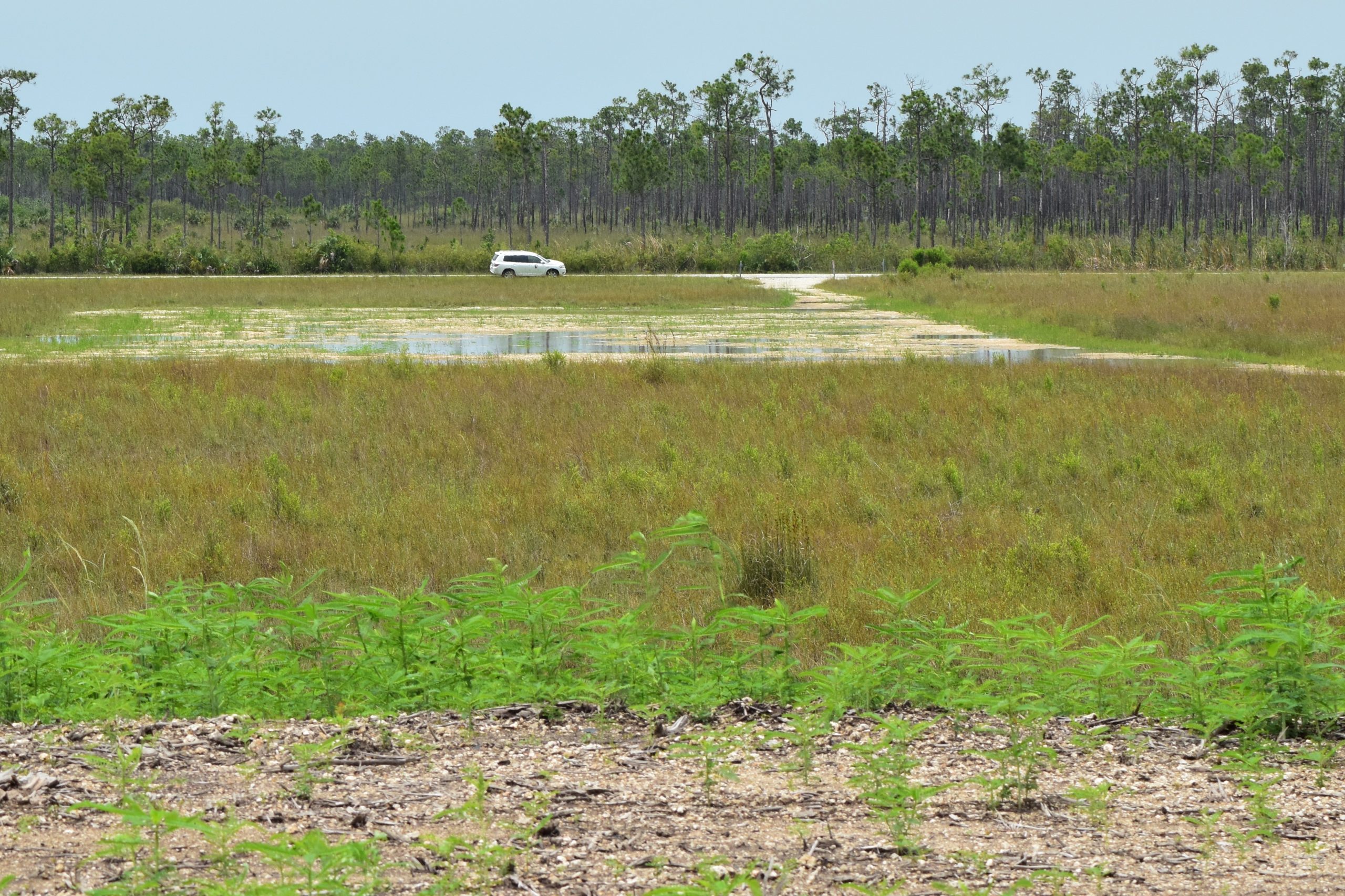 22 Jun the Hole-in-the-Donut…It’s NOT a Craft Donut or Brunch Place!

When I was first interviewed about this LHIP position at Everglades National Park, I thought to myself I am going to lose so much weight this summer… Then they told me I was going to work at the Hole in the Donut… I instantly reflected on the Dunkin Donuts commercial when he rolls out of bed and remarks, It Time to Make the Donuts. I was in a state of shock that there was a craft donut place in the middle of my National Park but was ready to eat. Now, as my first week kicks off, I can tell you that the infamous Hole in the Donut (HID) is one of Everglades National Park’s restoration areas. As a former agricultural district, this 6,300 acres of land served as prime real estate for banana and tomato farmers. As the park begins to acquire these private farmlands; they title them The Hole after 1947 to complete the park (Everglades native lands were considered The Donut). Twenty-eight years later (1975), the park is able to secure the entire Hole and farming permanently ceases in the Everglades. Without active farming on that land, INVASIVE Schinus terebinthifolius, (Brazilian pepper, or Florida Holly) decided to invite themselves to colonize these lands. Brazilian pepper like many invasive species of flora or fauna was introduced through the nursery industry/plant/or pet trade. In this case, we know that Brazilian pepper was widely used in south Florida as a landscape tree. It is important to mention that traditional farming takes in some cases a lot of work to reverse it artificialness to our landscapes, this case is no different and no less of an undertaking. The total restoration is a four-way collaborative effort between NPS, Miami-Dade County, the EPA, and the U.S. Army Corps of Engineers.. The primary goal HID Restoration is two-fold, 1) remove the artificial habitat down to the limestone bedrock and 2) replace is with native habitat which Florida wildlife is adapted and accustomed to utilizing. In 2010 it was reported that 4,100 acres of the HID had been cleaned and grated down to the white limestone. Last year in 2018 5,328 acres were reported to be restored to wetland status. I am happy to report in 2019, we have less than 972 acres of historic farmland to reach our completed 6,300 acres of wetland mitigation banking and native restoration land (the idea simply, is if you start at zero meaning a bedrock the surrounding ecosystem will support primary recruitment of founder & pioneering species like algae, lichens, invertebrates, Muhly grasses, & sawgrasses. Jeremy BC Jackson is an American ecologist who has studied shifting environmental baselines, he would say, what exactly are conservationists trying to conserve… Why go through the trouble of restoring any landscape, especially without knowing the history. The notion is straight forward, by restoring the landscape this means artificially starting at zero & letting nature take it course you will have initiated primary succession where the plants grow into forests the entire time creating spaces for organisms to come, eat, drink, live, and survive. In the HID they wanted to capture restoration success be returning ecosystem function to that landscape and increase ecosystem services holistically to Everglade National Park and surrounding areas, as many of you all might know that the OUR Everglades work like a sponge filtering the water and recharging south Florida’s aquifers. My Project: can by sum by a quote by Carl Jung, One looks back with appreciation to the brilliant teachers, but with gratitude to those who touched our human feelings. The curriculum is so much necessary raw material, but warmth is the vital element for the growing plant and for the soul of the child. I will be creating a curriculum which will help recount the stories of the farmers of the HID and the agricultural communities & cultures of the Everglade and surrounding farmlands. At the intersection of social and environmental justice there is Education and through it lies the foundation and skill of storytelling. Why I have recounted the story the HID Restoration Project…Stay tuned for PRELUDE or Flash Back!