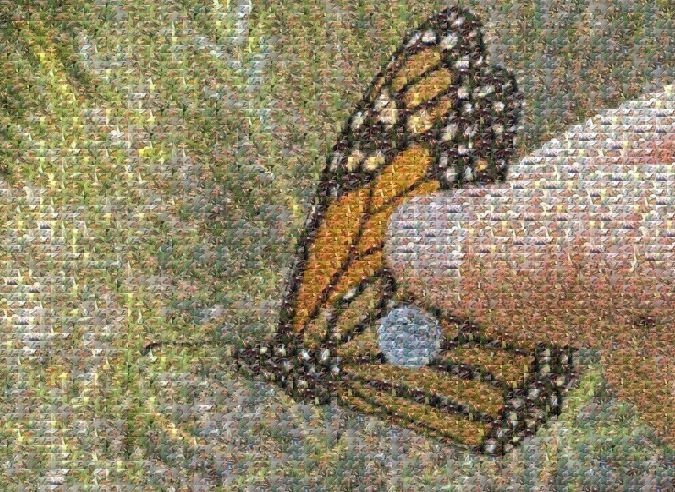 03 Oct The Definitive Ranking of My Internship’s Best Monarch Catches: #5 – #1

During my internship, Dinosaur has caught and tagged 150 monarch butterflies. (Pictured is a mosaic of pictures of most of our tagged monarchs). Out of those 150 catches, some stick in my memory as particularly special. Without further ado, here’s the list of the five best monarch catches of my internship.

The actual catch on this monarch was nothing too special, but there was much fanfare about catching and tagging our 100th monarch of 2019. At the end of the day on September 2, I was counting up the total number of tags we’d done so far and I got to 97, 98, and then 99. The next butterfly we tagged would be number 100. My excited supervisors joined me in the field the next morning to find number 100. I definitely wanted to be the one to catch it, so I was sort of racing against them to get the first catch. Eventually, I snagged a monarch when it landed on the branch of a little tree. Then, we did a special tagging and release of this 100th monarch. It was exciting to hear soon after this catch that for about every 100 butterflies tagged during peak migration time, 1 can be recovered. A 1% chance is not too bad, and I’m sure hoping that tagging 100 butterflies means we will get a resighting. For full news coverage of the 100th monarch, check out this Instagram post.

#4 The field trip run down – definitely my most athletic catch

As mentioned in a previous blog, this happened when I was catching butterflies to tag with a group of middle school students on a field trip to Josie’s Cabin in Dinosaur. Carrying just one butterfly in my holder with only minutes to go before the students’ arrival, I was making my way up to the picnic area to prepare for the field trip. Then, I saw a monarch go flitting through a field. I put down the holder and took off running for it, knowing that the more butterflies I could show the students, the better. I had to run maybe a hundred yards through a field to keep my eye on the butterfly, and soon enough it landed in a tree near a ditch. It was high enough up that I would have to jump, and there was a definite danger that I could fall in the ditch on the landing and sustain a laughable injury. I went for it though, leaping up and reaching into the tree to net the butterfly. I landed safely and with the butterfly secured in my net. I like to image that this catch was sort of like a famous LeBron James full court chase down and shot block. That could be an exaggeration though. Anyway, after the catch, I trekked back to the picnic area with this newest monarch. By the time I’d got there, I was sweating plenty and out of breath. It was worth it though, as I had one more butterfly to tag with the students and I’d just made one of my better catches.

This catch maybe wouldn’t seem too special to you considering it was the second monarch to be caught soon after emerging from the chrysalis. This one, however, was very cool because I actually found the chrysalis the day before. Well, actually, some little kids going for a hike found it a few feet off the trail in Hog Canyon. They pointed out to me a chrysalis dangling from a reed stem. This chrysalis was clear and I could see the orange wings of the butterfly inside – meaning it wouldn’t be too long before it would emerge. I told my supervisors about this cool finding, and one suggested I camp out overnight to watch it and see the butterfly emerge. I wasn’t willing to do that, but I went straight back to it the following day after helping with a public program in the morning. While stepping down the trail and scanning for the chrysalis, a monarch started near my feet and flew up. I netted it and looked up to see the chrysalis – now hatched – just a few feet away. When I released the monarch, it didn’t fly away but just stayed put and dried its wings. With that, I was pretty certain the butterfly I just caught was the one I saw the day before still inside the chrysalis. It was very cool to see an individual monarch at different stages of the life cycle.

Catching my first monarch of the summer was pretty awesome. As I’ve explained in a previous blog, this monarch came flying straight for me within about five minutes of beginning my field work for the summer. I used my best tennis swing to net the airborne butterfly and then celebrated a little with my colleagues. In addition to being the first monarch, this was a good catch because the butterfly was flying, not just landed on a flower. The only reason this catch doesn’t make the top of the list here is because I was so nervous about handling it and tagging it that my hand was shaking a bit. I totally embarrassed myself in front of my colleagues, who probably were concerned that they hired a person who was squeamish holding a butterfly to do basically one job: catch and hold butterflies. I’m proud to report that since then, I’ve become totally confident holding butterflies. I have also taught many others how to catch and handle monarchs safely.

This catch was probably the most unique of my internship, and that’s why it rises to number one on the list. I was sitting on a raft in the middle of the Green River in early September on a monarch survey trip. I was peering through my binoculars at the river banks to look for milkweed or monarchs. Suddenly, I see some brilliant orange wings on a goldenrod plant and I let the boatman – who also happened to be the head of monarch conservation for the National Park Service – know that I’ve spotted a monarch. Although he doesn’t see it at first, he’s able to row us back upstream to the bank a dozen or so yards above the monarch. I extend my net, walk up to the front of the boat, and prepare myself as we float down the bank toward the monarch. When we’re close enough, I throw out the net over the goldenrod, pinch the net closed, and pull it back onto the boat before we float away again. “Got it,” I say, and give a thank you to the boatman who expertly guided me to the river catch. We tag and release the monarch while sitting on the raft and then continue on our way down the river.

Now that we’ve finished the list and celebrated all my fun catches, it’s worth noting that there were a lot of others that could have been cool but didn’t quite work out. There was the time I ran and jumped into a tree to try to catch one, the time I almost netted one through the open car window, the time I swung for a monarch across a little spring, and then the time I was face-deep in thick Joe pye weed and just missed a monarch. All would have been awesome catches, but the monarchs were just a little too quick for me on each occasion.

Finally, while catching and tagging butterflies is pretty dang fun (and let’s be honest, pretty frustrating sometimes too), the real joy of this research is releasing the monarchs. Every release of a tagged monarch is special; it comes with a strong sense of hope that the butterfly and its tag will be recovered to give us new information about monarch migration. It’s also exciting to release a monarch that might be flying hundreds of miles south to a new state or even a new country.