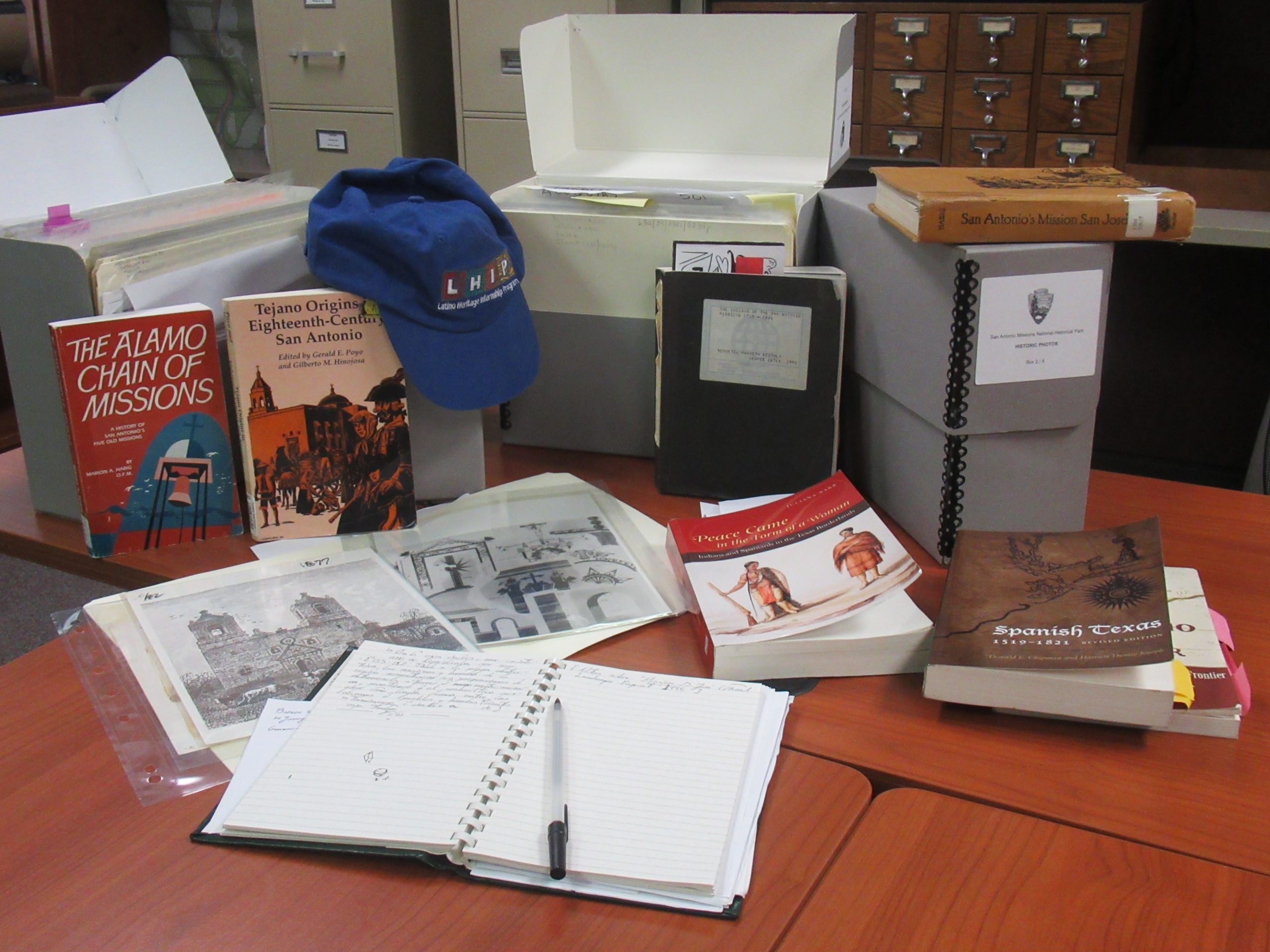 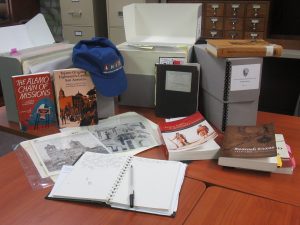 Some primary and secondary sources for my project. Courtesy of the San Antonio National Historical Site and its coworkers.

Three hundred years is a long time. The oldest mission administered by the National Park Service was founded in 1720 – San José y San Miguel de Aguayo – while the other three – Nuestra Señora de la Purísima Concepción, San Francisco de la Espada, and San Juan Capistrano – were relocated from their failed starting points in East Texas to their modern locations along the San Antonio River in 1731 after their Franciscan friars utterly failed in their purpose and succeeded only in gaining the ire and antagonism of the very souls they had claimed to save. The four Missions did, however, find their measure of success in the lands they now stand on, achieving their final secularization in 1824 and redistributing the property of land held by the Roman Catholic Church to the people that fed the priests bellies and filled the king’s coffers for over a century under constant attack from the Apache. Their remuneration for a hundred years of colonization in which the acceptance of, and submission to, a foreign king, a foreign tongue, foreign customs, and a foreign god was the fair price to pay for their survival from imperial Lipan to the northwest whose ferocious speed and nomadic lifestyle kept them at bay from the reach of Spanish plagues, Spanish arms, and Spanish servitude.

Three hundred years is a long time. By 1821, the liberal armies  of New Spain broke the royal chains of the crown of the old one and named the first amongst them Emperor, ending almost 300 years to the dot of peninsular domination. By 1824, the Roman Catholic Church understood that the descendants of the Payayas, Xarames, Mescales, Ervipiames, Yojuanes, Cholomés, Cíbolas, Jumanos, and the rest that Spanish ignorance and impotence failed to remember, had learned the good ways of civilization and piety. They were dubbed ¨gente de razón¨, people of reason, and as promised, were bequeathed with property of the land that they and their ancestors had themselves tilled in service. The population of the missions by this time had already squarely decreased by this time as most of the Indians had been claimed by plague and most of the survivors were considered hispano in culture, their parent´s and parent´s parents’ culture stamped out by priestly wisdom. The rest of the XIXth century is difficult to piece together, but evidence points out that for the remaining families the old lands of the missions that they were granted to stayed mostly in their hands, with some outsider coming in to speculate in ranch lands (mostly) or married into the plot owners properties on occasion. Some missions even saw skirmishes and battles take place during the Anglo slaver revolt of the 1830s, but in any sense, the only real mission buildings still used by the descendants were the temples – and even these could be subject to their necessities as the church of Concepción was used to house cattle by mid-century. To my understanding, as the descendants farmed their land, the missions themselves crumbled. An attempt was made by the Benedictine order during the 1860s to restore San José, the biggest of the four missions, but these plans were cut short by the civil war that almost tore the Union apart.

Three hundred years is a long time. Once the XXth century had commenced, the descendants still occupied their traditional lands given by the church a hundred years prior. However, in this century, state led projects like the Works Progress Administration and the later National Park Service started to create projects for the maintenance, reconstruction, and preservation of the surviving mission structures. As such, as the missions were turned from lived land into the museums that are dedicated to the present and future protection of the surviving buildings and the interpretation of its past. Throughout the decades, the individual plots of lands have been purchased bit by bit by the NPS to ensure that much of the original mission lands have been put under its sole ownership, or protection and vigilance in cooperation with people that still inhabit the historic fields and ranches of the missions.

At my internship this summer at the San Antonio National Historical Park, I am charged with developing a crowdsourcing initiative designed to source photographs owned by the mission´s descendants, the wider San Antonio community, and the general NPS visitors. Today, we are still frustrated by our relative lack of understanding of certain periods of mission history, and having visual proof of how and where people lived and worked will be of incredible primary-source importance. For many reasons, we have an abundance of images of the churches and conventos, but the production of photographs in the past has ignored the population that left such an incredible weight on them. This contradiction is the one I aim to help resolve with my and the park´s effort. The humble, the poor, and the ordinary deserve their protagonism as much, and maybe even more, than the finely dressed and the ostentatious in the pages of history. I am more excited on the prospect of finding jacal, timber, and houses of the farmers themselves than yet another image of the faded glory of chauvinist imperial ambitions. With any hope, my efforts here will help shine some light onto the peoples that traditional production of history has done its fullest to leave sidelined and forgotten for the past three hundred years.