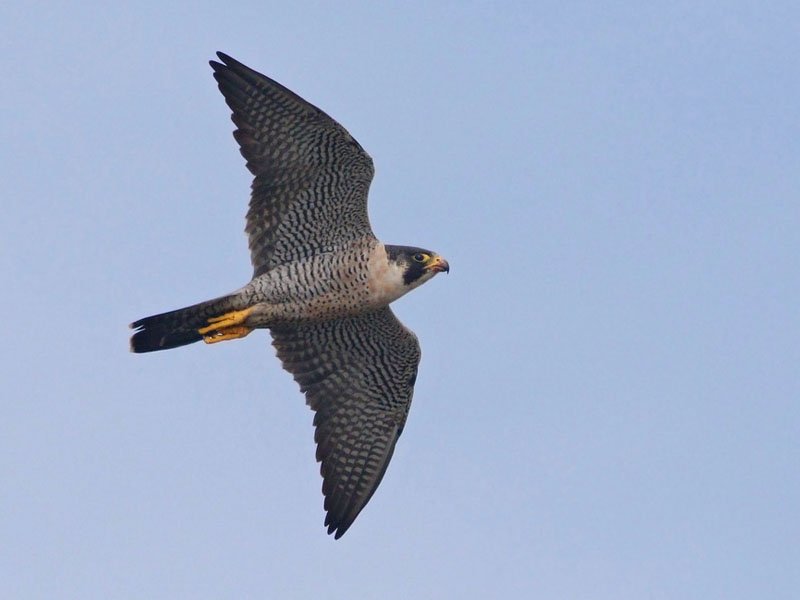 25 Jun Shadowing and Showers: A Cross-Training Opportunity and My First Program

This week was very exciting; I not only got to shadow a restoration project happening in the park, but I also led my first program!

The restoration project I shadowed involved Peregrine Falcons, a bird of prey that was negatively affected by the use of the chemical pesticide DDT during the 1940s-50s. Insects would consume the pesticide, then be eaten by songbirds, which were then eaten by the falcons. DDT would make its way up through the food chain and eventually build up inside the top predators. For the Peregrine Falcons, it made the shells of their eggs extremely weak. Their populations crashed, and Virginia lost almost all of its peregrines. Now that DDT is banned, Shenandoah wants to repopulate the park. The park relocated baby peregrines from underneath bridges to the protected Shenandoah cliff sides. A team would go out and feed the baby peregrines, and eventually they got old enough to fledge and take care of themselves. Currently the young peregrines still have access to daily meals, but they are beginning to hunt for themselves. The group working on the project continues to observe the behavior of the young peregrines from afar, to see how the restoration project it working. I got to shadow one of their members for half a day as she set up a scope and recorded the peregrines’ behavior when they returned to the cliff side. It’s a really interesting project, and the peregrines are very interesting small birds of prey, so I was very happy I could shadow and understand more about what the park is doing.

I recently got to lead my first ever ranger program, since the ranger that normally would do it was gone. This program involved engaging visitors in a citizen science program happening at Shenandoah. I gave a 30- minute introduction to the topic of citizen science, phenology, and the specific project we work on. We submit our data to the National Phenology Network, which studies how seasonal changes and organism responses are being affected by climate change. During our program we collect data on the phases of the trees in our plot, for example if they are budding, fruiting, or flowering. This data will help the National Phenology Network determine if trees in this area are budding out earlier or later than usual. In turn, that could tell other scientists how organisms will be affected by the time change for tree budding. After my introduction, I took visitors to the plot of trees and taught them how to collect the tree data and record it. Afterwards, we joined back up and discussed our observations and predictions for the plot.I feel like this program went really well; I remembered what I wanted to say and felt confident. I can’t wait to start leading some other programs!