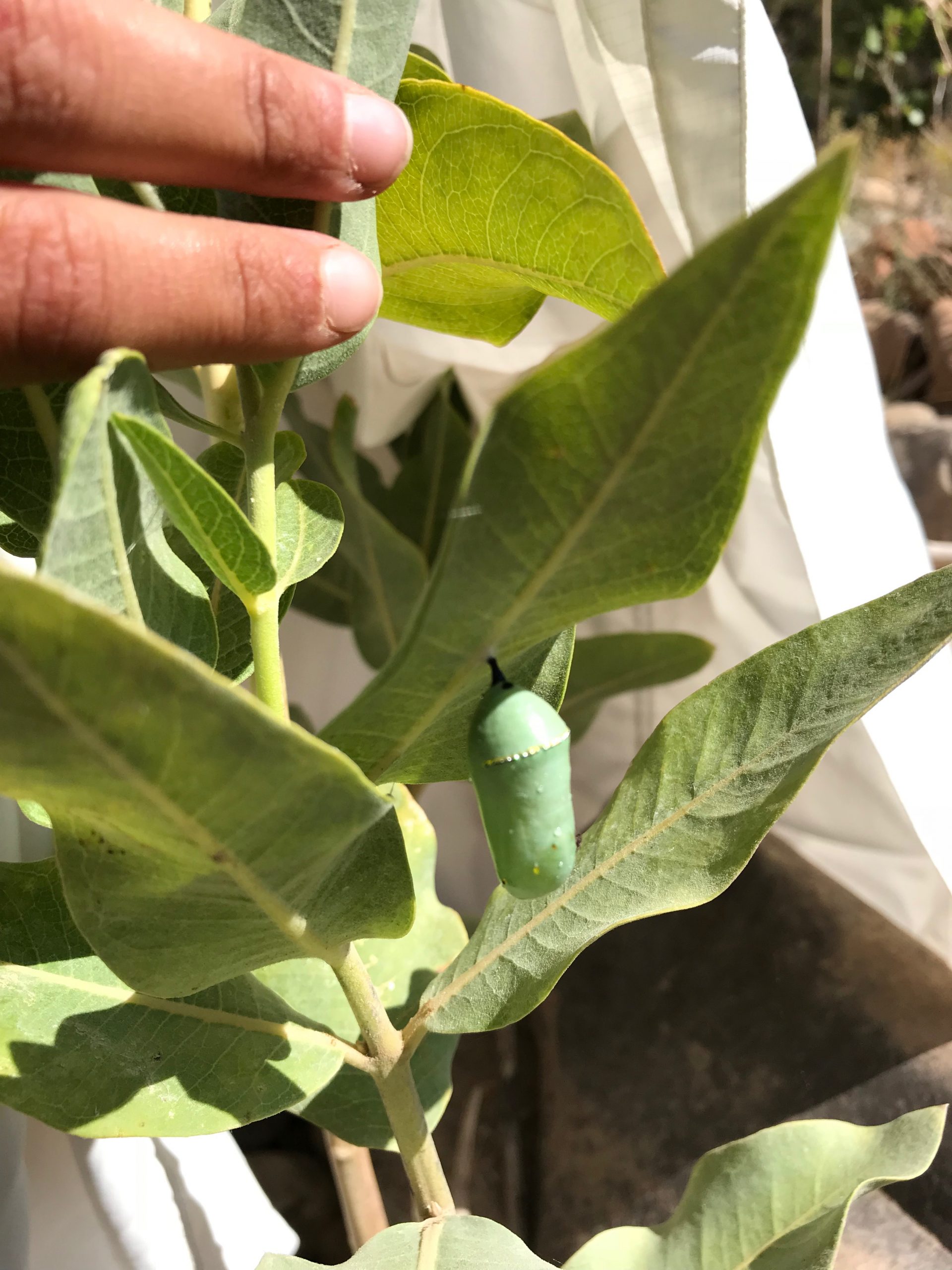 19 Sep Science on the River in Dinosaur National Monument

While rafting on the Green River last week, I continued the tasks I have been working on all summer: surveying for monarch butterfly habitat and tagging adult butterflies. Surveying for habitat meant recording the presence and approximate number of milkweed plants along each river mile. For about the first two days of the float, milkweed was present in nearly continuous patches on both sides of the river. Farther downstream, patches started shrinking and becoming fewer and farther apart. I also recorded what nectar plants were available to feed the adult butterflies; sneezeweed and goldenrod were the most common flowers. Finally, we periodically stopped at patches of milkweed to search for eggs and caterpillars. We found a number of monarch caterpillars and eggs. Many of the eggs were actually already hatched; what was left behind was just part of the egg case. Egg cases are meant to be eaten by the caterpillar when it hatches. Every leftover egg case was a little mystery: did some predator eat the caterpillar before it could eat its egg case? Did something else happen to it? Did it just not eat its egg case for some reason?

What we found the most of in our searches of milkweed patches were munched milkweed leaves. 1st and 2nd instar caterpillars especially have a distinctive chewing pattern that was left behind on many leaves and is pretty easily distinguishable. Perhaps, most monarchs have already become butterflies at this point in the year and are flying south. We found only the remnants of their meals when they were caterpillars. The eggs and caterpillars we did find are probably a bit on the late side for maturing. I hope that the weather won’t turn too cold before the month or so it will take the eggs and newly hatched caterpillars we found to become adult monarchs that are ready to fly south.

Since it was rainy and hailing and cold for a decent portion of our trip, the adult monarch butterflies were probably focused on staying warm, not flying around and being catchable/taggable. Ultimately, we only observed around 16 adult monarchs during the trip. Maybe this was because of the weather, maybe most of the monarchs had already passed through, or maybe it was just luck. We tagged four monarchs on the trip, perhaps a disappointing number considering I was traveling with more than 55 tags and had hoped to see swarms of monarchs flying down the Green on their way south. It was still great to get four tags out though. Thee of the tagged individuals were in excellent condition and probably are migrators. Two of our monarchs were caught nectaring on goldenrod on the riverbank and two were caught in a meadow area near the Echo Park (near the confluence of the Green and Yampa Rivers) parking lot.

The highlight of catching was definitely catching a monarch while standing on front of the boat while floating. We were in mid river when I spotted some fabulous orange wings on a goldenrod. The boatman steered us over to the bank just upstream from the monarch, and as we floated down I reached out my net and captured the butterfly before we floated away again. Tagging a butterfly is always pretty cool, but it was especially fun to tag and release a butterfly while on a raft floating down the middle of the legendary Green River. During our taggings, I explained all the steps and science to other members of the trip. I enjoyed doing this and pointing out monarch caterpillars to others when possible.

On the last day of the trip and just about 30 minutes upstream from the takeout point, we struck monarch gold. From the middle of the river, I peered through my binoculars to a sandy bank and spotted a few young shoots of milkweed. We brought the raft into this spot and I begin checking under milkweed leaves. Pretty quickly, I found a second and third instar larvae on two plants right next to each other. My colleague went around the corner a bit and found much more milkweed, and that’s when it got exciting.

First, I found an empty chrysalis under a milkweed leaf. It was clear and the bottom had been ripped open – a monarch butterfly successfully formed in that chrysalis and emerged sometime before we arrived there. In all likelihood, it had already begun its flight south by the time we spotted its chrysalis. This was the second empty chrysalis I have found this summer. The first was at around Josie’s Cabin in Dinosaur. We actually captured and tagged the butterfly that had just emerged from that chrysalis, as it had landed near its chrysalis and was drying its wings.

The excitement continued from there, as I found two more chrysalises (or is “chrysali” the plural?). These two both were still active with a monarch inside them going through the metamorphosis process from caterpillar to butterfly. The chrysalises were attached to the bottom of a milkweed by a little black stem. They were pea green with a golden ring around the top. A chrysalis is a pretty beautiful little wonder of nature. I hope that all goes well with the metamorphosis and the butterflies have a successful migration. I was thrilled to finally find some active chrysalises and my excitement in doing so definitely confirmed by status as a monarch butterfly nerd.

This awesome spot at the end of our trip also yielded several more monarch caterpillars, one hatched egg case, and a bunch of milkweed leaves that had clearly been munched on by caterpillars in previous days or weeks. With the addition of the findings at the site, we had successfully hit for the cycle on the trip. That is to say that we found every stage of the monarch life cycle – eggs, hatched eggs, 1st through 5th instar caterpillars, active and hatched chrysalises, and adult butterflies. I was happy to end the week on this high note and end my notetaking by marking down one more riverbank site of monarch breeding habitat in Dinosaur.