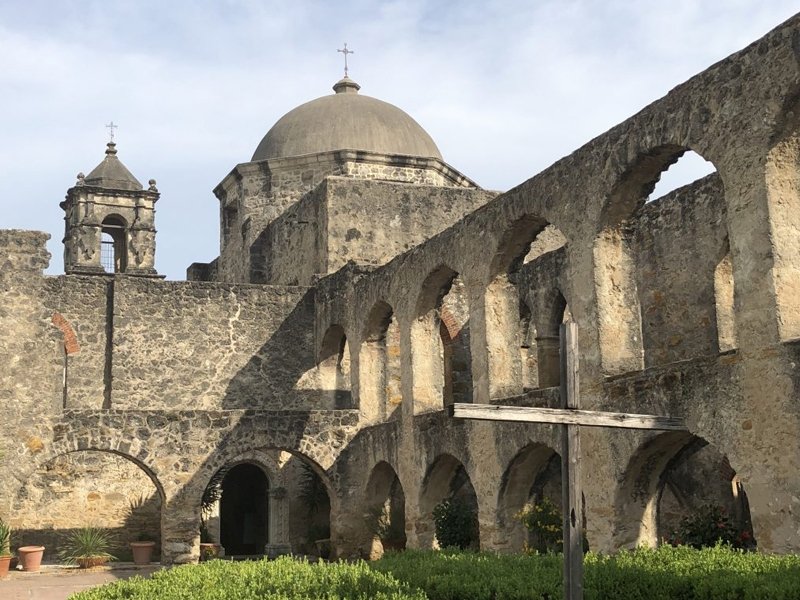 Posted at 00:03h in Blog by Alejandra Garza 0 Comments
0 Likes

San Antonio Missions National Historical Park, like many national parks, is unique in so many ways. The missions stand as a reminder of the native peoples who were converted to Spanish citizens 300 years ago.  However, the most interesting piece of its history is that it is the first, and only, place within the National Park System to operate jointly with a religious organization and have active parishes.

The unique relationship between the National Park Service and the Catholic Archdiocese of San Antonio is noteworthy because of the First Amendment, the agreements established in the 1980s, and the present-day operations of the park.

The First Amendment’s Establishment Clause prohibits government action from favoring one religion over another. In the 1700s, the missions were established by Franciscan friars who practiced Catholicism. Therefore, when the park was established in 1978 through joint efforts of the Catholic Archdiocese of San Antonio, the Texas Parks and Wildlife Department, the San Antonio Conservation Society, and the United States Department of the Interior (DOI), it was not a smooth transition. The organizations had to prove that the establishment of San Antonio Missions National Historical Park would not be promoting Catholicism. Instead, it would preserve, restore, and interpret the Spanish missions for the public.

In order to establish a separation of church and state, the Cooperative Agreements were signed in 1983. The agreements defined how the park would not violate the First Amendment and how the Department of Interior would work with the Archdiocese. They established that the park’s interpretations would not prohibit or advance Catholicism, thus it did not break the law. Also, they provided guidelines so that the church or the DOI could sever the relationship if they felt the need to. Other operational guidelines were also written. Each party knew what they were responsible for because they worked mutually on the agreements. Though they could not predict the future, they covered all their bases and took a chance in establishing San Antonio Missions National Park.  The park was officially opened on April 1, 1983, almost five years after President Jimmy Carter signed the bill that established it.

Since the Cooperative Agreements were signed, the National Park Service still maintains and operates the mission grounds, while the Archdiocese of San Antonio is responsible the church buildings. Park rangers take visitors around the grounds and tell the history of the missions, but they do not interpret within the church buildings. Most visitors are surprised to find out that each mission still has an active parish, while some of those who live around each mission gather every Sunday inside its walls. In 2015, the San Antonio Missions was designated a World Heritage Site. The park continues to partner with city organizations to ensure everyone enjoys themselves at the missions.

San Antonio Missions National Historical Park is the first and only park to have a partnership between the DOI and a religious agency. Even though this relationship presented some challenges because of the First Amendment, the Cooperative Agreements laid out the rules for operation. Today, visitors enjoy a free National Park that has a rich history that spans 300 years.