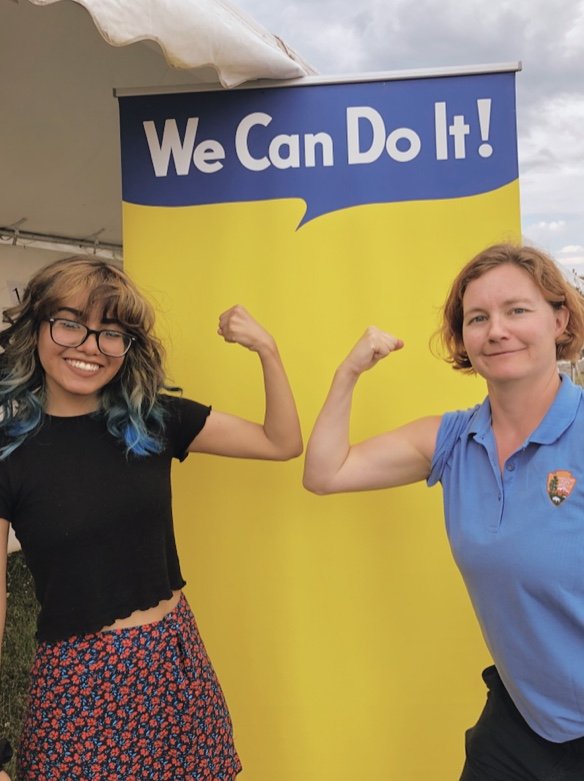 Sadly, I couldn’t attend the LHIP conference in Washington, but I still had a blast at the 31st Salem Maritime Festival this weekend! There was live music, arts and crafts, demonstrations, and there were two visiting vessels: Kalmar Nyckel and Polaris. On both days I worked at the ParkEd table in the morning and the Pride table in the afternoon.

At the Pride table there were pamphlets for Salem Maritime and Saugus Ironworks National Historic Sites, Stonewall National Monument and queer history which was created by one of the rangers at Salem! We also had a poster with a drawing of a tree and finger paint so visitors can add their fingerprint to our community tree. We started this poster at the North Shore Pride Event and continued it at the festival but by the end it ended up looking more like lanterns than a tree which was also totally rad. One boy walked up to the table and was looking through the pamphlets, so I tried to talk him, but he didn’t answer so I just assumed he was ignoring me. He pointed at the tree and paint and I used the few words in ASL that I remembered when I realized he was using hand signals, and his smile got so big. I’ve started practicing ASL at home because I want to be able to communicate with everyone and it’s an important language just as much as English and Spanish.

On Saturday morning, Marianna, a ParkEd Ranger, and I were laughing because they kept playing Michael Jackson but on Sunday there was an amazing local band that played some covers of Fleetwood Mac. They were also all wearing bell bottom jeans and dressed like they were at Woodstock, so I was completely freaking out. I got to walk around and do some exploring and one of my favorite booths was Parks on the Air which is a group of operators who setup in national and state parks and contact operators using ham radio. Ham radio isn’t a popular hobby, but it should be because you get to talk to people from around the world without using the internet or cellphones which is super rad. I even got to make official radio contact with someone from Tewksbury and write my name in Morse Code. It was a wicked fun weekend!