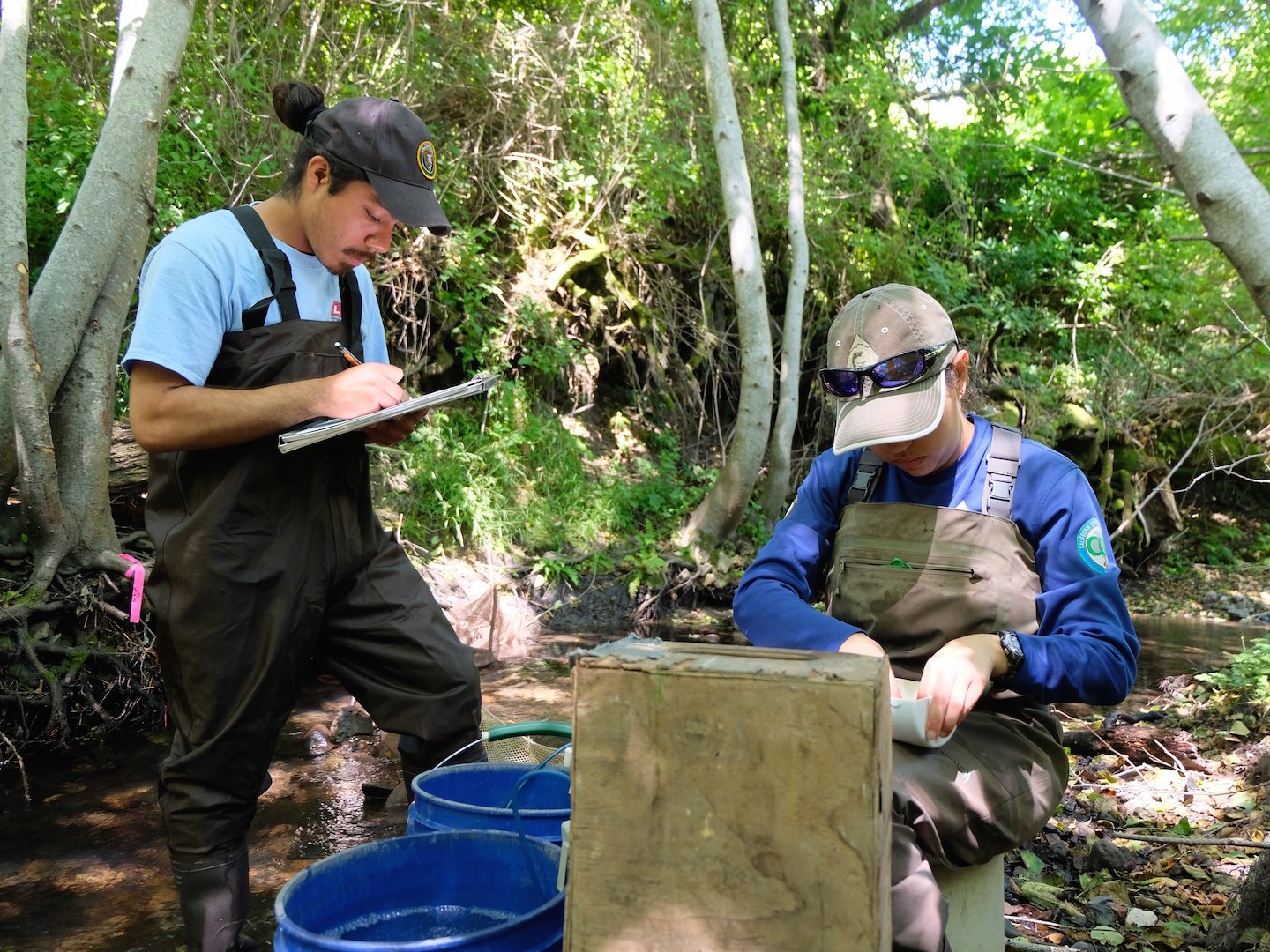 Here’s an overview of a few projects that I have been involved in during the last few weeks:

Point Bonita YMCA organized a visit to Point Reyes National Seashore to bring out kindergarten campers for a short hike and for a few activities. This was a perfect opportunity to plan my first program since children can be a fun and challenging audience. I knew I had to be very creative to ensure that their attention was fully grasped through the activities, so I thought tactile park props such as skulls and skins of animals would be great learning tools to engage them. I recently took a mammalogy class where I learned how to identify mammals by using skull characteristics, so this was a great way to share cool details about mammals and spark their attention early on. I also planned an introduction to binoculars program to teach the children how to use binoculars to encourage them to look at the birds in the park. I prepared for the event as if I was going to give a presentation to my classmates in one of my wildlife classes (I had a thorough outline that I reviewed probably more than I needed to).

After setting up the mammalogy table and the binoculars for the children I waited for the scheduled hour (11:00 am) and anxiously waited for the sound of a school bus. The bus finally arrived and the children made their way into the picnic area across the visitor center where we were set up. It was a group of 24 children, full of energy and ready to learn (but mostly play). By the time they approached the table, the outline for the activities had to be improvised and without an introduction the children had their attention and hands on the animal skulls and skins.  They asked questions left and right, “What animal is this?” “does this jaw belong to this”, “this is so soft (gray fox skin)”. By the time I answered a question, they were already focusing on the next skull or skin. After fifteen minutes of mammalogy madness the group was divided into two: one followed my colleague Diego for an earthquake program at the Earthquake Trail and the other followed me for the binoculars and birding introduction. I passed the binoculars out, gave a quick lesson on how to handle and properly use them and now we were ready to look at birds and other animals in the area. The children spent most of their time looking at ravens, a few Brewer’s blackbirds, at each other and at me. A few children needed additional help on how to focus the binoculars, others managed to untie the straps, but in spite of that they had a great time. I learned quite a bit from this: outlines may be necessary but as a presenter you have to improvise. Children are full of energy, their attention span is very short, but they’re a joy to work with. The intent of the binoculars program was to plant the explorer seed into the children and inspire them to enjoy, study and respect the natural wildlife that shares a space with them. I was very fortunate since a few were fully focused on determining what bird they were looking at by comparing to bird guide chart. The YMCA organizers decided to plan another visit on the 31st of July and you can be certain that I will be making another outline. 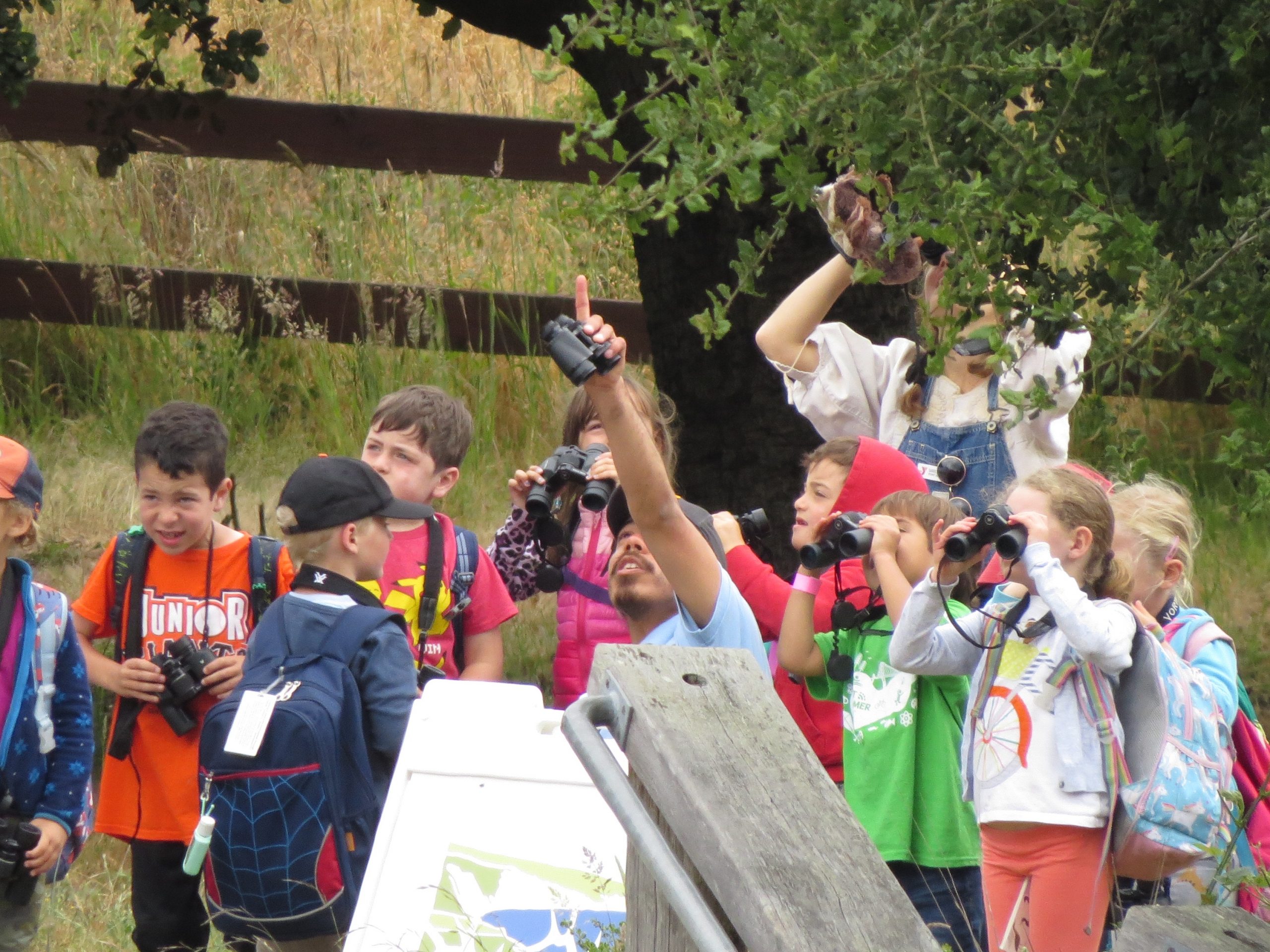 Sounds like fun. Electrofishing is a fish survey technique performed in creeks to capture, identify, measure the length, and mass of fish. It is done by setting up a pool in a creek by placing nets in two ends of the creek with the use of rocks and sticks to sustain the nets. This method, maintains the fish in a pool that is roughly 5 meters in length. After the pool is set up, a member of the crew puts-on a ghostbusters-like backpack mixed with a metal detector used to shock and stun the fish for a quick second (the voltage is only strong enough to stun them). Two additional members follow the individual with the backpack with nets. They wait for the a fish to be stunned and when a fish is finally stunned they capture it with a net and then pass it to another member that places the fish on buckets distributed along the creek. Each survey lasts about 10 minutes and the area is covered about three times. After the survey is done, the members then record the data of each fish that was captured and release them after that’s completed. The organisms that are studied include steelheads (Oncorhynchus mykiss), sculpins (Cottoidea), lampreys (Entosphenus tridentatus) and salamanders.

This was an awesome experience because we had to hike into the sites in forested terrains and and we eventually walked in the creek (we wore waders of course, which was a another first for me) while carrying all the equipment. Once we set the nets at the survey location I was first assigned to collect and place the captured fish into the buckets and then write the data. After we finished collecting the data of the first site, I had the role of capturing the fish alongside Brentley McNeill, the fisheries biologist who operated the “ghostbuster device”. Immediately after shocking a fish, Brentley yells out “Fish On!” and that is the signal for the catchers to capture the fish. The interesting part about the process is that even when the fishes (different species) are stunned, they are still difficult to capture. Teresa Urrutia was the other member of the fisheries crew who captures the fish (also performs the measurements) and she certainly had the quickness and skill to capture them. She was an expert. After a few failed attempts, I gained enough skill to capture fish. I was so thrilled because I always want to be as resourceful as possible when I am invited to perform surveys with the ecologists and as an aspiring biologist I know the effort it takes to perform a survey, and the importance of collecting data. We performed a survey in four different locations and we walked entirely on the creek that was thigh-deep at times. I had so much fun walking through the creek as I avoided the stinging nettle and poison oak that hanged over the creek. Unfortunately, I rubbed my elbow in stinging nettle because I decided not wear my LHIP long-sleeve shirt. Great move. The stinging is not too painful, the feeling is similar to the feeling that occurs when your leg falls asleep, but I am extremely fortunate it was only stinging nettle instead of poison oak.

This experience gave me a different perspective on fish biology. I find all animals interesting, but fish are definitely at the bottom end of my list. Through this study however, I learned that performing fish surveys is an enjoyable experience. Now I am thinking of enrolling in an Ichthyology (study of fish) class at Humboldt State and I am also open to work with fish in the future. 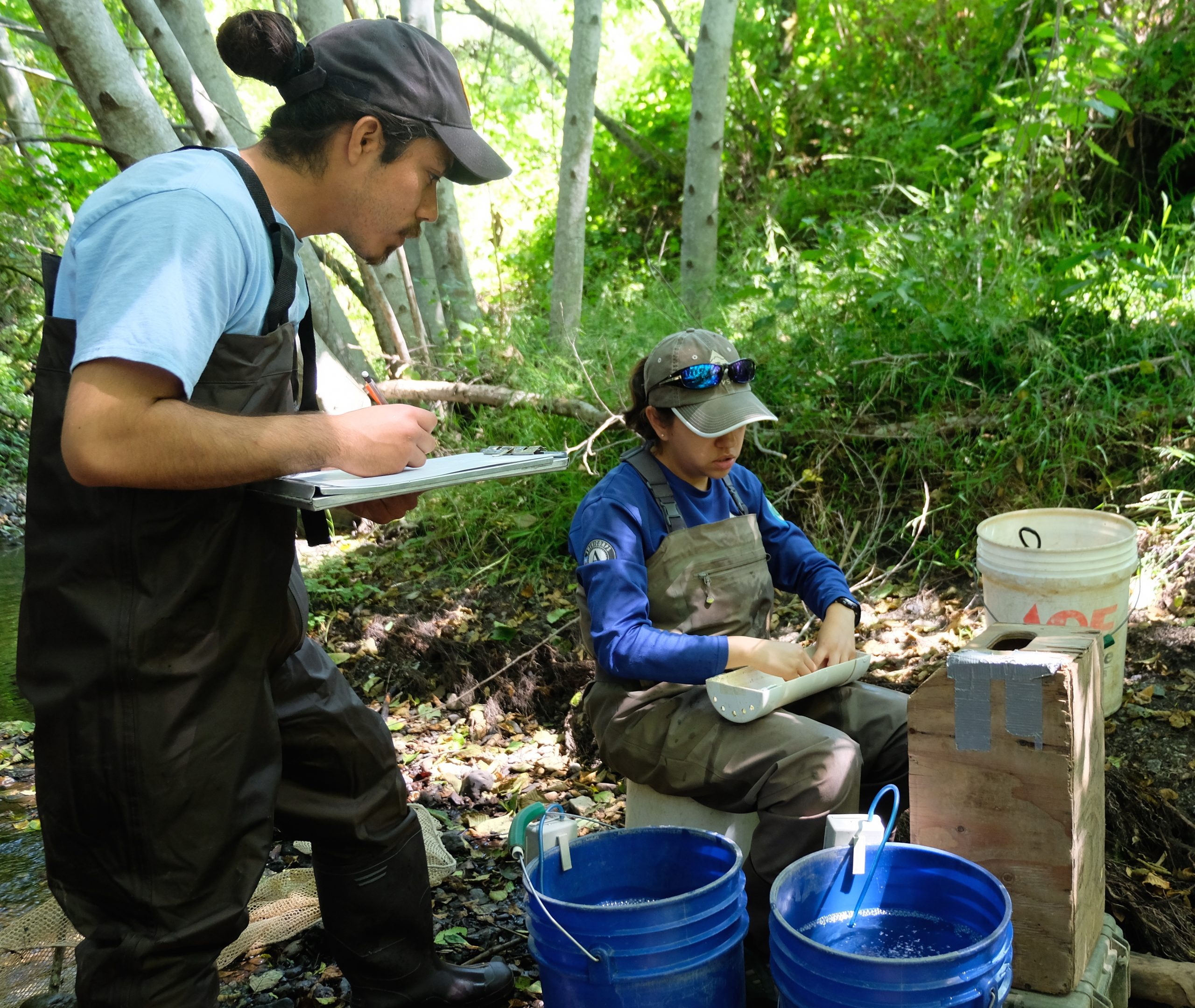 All the experiences I had so far as an intern in Point Reyes National Seashore have been extremely helpful. I have gained valuable field experience during the wildlife surveys, I have gained a lot of confidence in public speaking by working in the visitor center where I interact with the public and I have had the opportunity to organize a few programs as well. And of course, I have met a lot of wonderful people.

My awesome supervisor, once again set up another amazing opportunity to meet and perform a general survey with the Tule Elk ecologist Dane Horowski. My project for Latino Conservation Week was to organize an interpretive hike to expose the public to the endemic Tule Elk and Dane shared a lot of important and helpful information about the elk in the park. Dane spoke to me about their reproductive behavior, their biology and about their local history. The site that we visited was very interesting because the bulls (males) were already bugling and some were already seen with their herd of females. This means that rutting season begins earlier for this set of elk compared to the elk located in the Tule Elk Reserve. I heard the elk bugle and wow, I was amazed. You should pause, search in the interwebs “bull elk bugle” and comeback right after. Then you will know how shocking it is to hear these large ungulates during the rut.

Hearing the elk bugle was already a highlight, but Dane shared his experience as a wildlife biologist; from his college years to the immense number of positions and animals he has worked with (mountain lions, bears, turtles, ferrets, turkey, elk, wolves, small mammals). Dane is as game as it gets for wildlife biologists. I was so impressed by all the studies he has performed and I’m never going to forget how passionate he is about his experiences. It’s not easy becoming a wildlife biologist, it’s difficult to find a permanent position (especially with the park service), and you have to be willing to make a lot of sacrifices to gain experience and move forward. It’s a challenge and it was overwhelming to hear how much he has traveled. He was honest about the difficulties of the field, but at the same time he was very encouraging. His advice was so insightful, motivating and gave me a wider perspective of the entire picture. Thank you Dane.

It has become a tradition now. Special thank you to the Point Bonita YMCA, Brentley McNeill and Teresa Urrutia and Dane Horowski. It has been a honor.