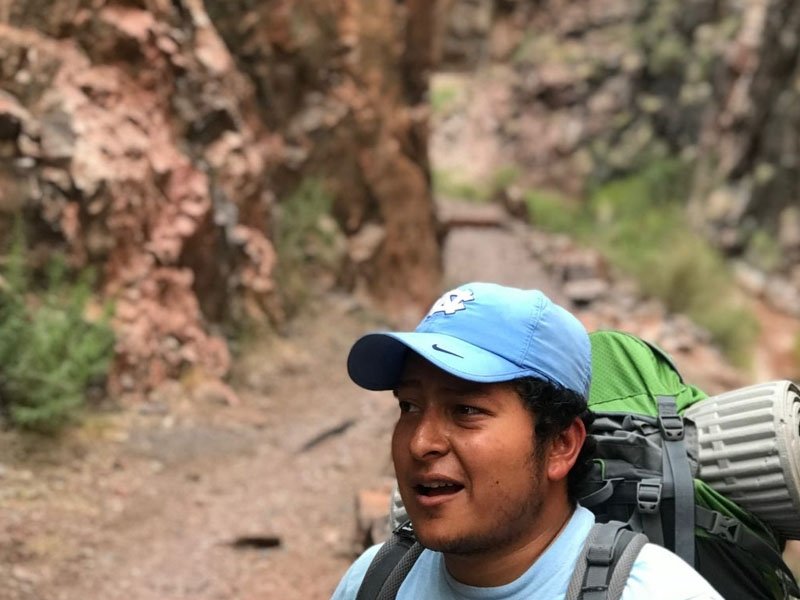 When I was interviewing for this position I learned that towards the end of the season all the kids were going to do a rim-to-rim hike. I was a little nervous when I first heard about this, but I was also excited. As I said in a previous blog, I started preparing for this hike by spending my days off going into the canyon and getting farther and farther every weekend.

The longest hike I did while here was nine miles, and I felt good about that. The rim-to-rim is around 24 miles long, and we started from the north rim. The ride from the south to north rim is around five hours. The north rim is so much different than the south rim. The weather is cooler, the vegetation is greener, and it is so much smaller than the south rim. I really liked it, though; it reminded me of home. North Carolina is green and cool, as was the north rim. We saw a California Condor talk, and some of the YCC kids got sworn in as Junior Rangers for the north rim, myself included. After that we were walking to the bunk houses when the sun was setting, and we all ran to the edge of the canyon and sat there and stared at the south rim, our home. I was given the task to lead the YCC interns for the whole week during the hiking portion of the day. The next day we started heading down on our way to Cottonwood Campground. We passed roaring springs where all of our water comes from, which was really cool. When we were going down I saw something on the trail, and it was a rattlesnake. I stopped everyone, and we just watched it and waited until it went away. It was actually kind of cool, but we kept our distance. When we got to Cottonwood it was around eight or nine in the morning, but we were all so tired that everyone found a spot and took naps. Later in the day we went over to the creek and dipped our feet in it, and it was nice considering that it was really hot. The next day we headed out to Phantom Ranch, which was my favorite location of the rim-to-rim. To get there you have to go through this narrow area of the canyon called The Box. The Box can get over 120 degrees, and this was one of the areas that I was looking forward to experiencing. When we went there it was very early in the morning, so the heat was not too bad. The Box was beautiful; the creek runs through it and there is plenty of vegetation there. It was exhausting, and with the sun coming up you could feel every time the temperature rose. When we got to Phantom Ranch the temperature was about 110, more or less, but it was really cool. When we settled in at the cabins we went to the canteen and had some ice cold lemonade, which was somewhat expensive but it really hit the spot. If you’re ever down there, I highly recommend the lemonade. I didn’t take a nap this time, but instead played my favorite board game, Monopoly, with the YCC kids. I lost, but it was really fun. We saw a park ranger program, and learned that out of the 6,000,000 visitors the Grand Canyon gets, only one percent make it down to Phantom Ranch. Some of us got sworn in and got patches. We then went down to the Colorado River, where I dipped my feet in and, oh my lord, it was ice cold. We then went back to the cabins and played some more Monopoly. During this whole week we were hiking down and on flat ground, but the next two days were all up hill. We woke up around four a.m. and started our hike to Indian Garden.

We went on the bridge over the Colorado River and then headed up. Personally, I thought this was the most strenuous day because of an area called the Devil’s Corkscrew. The Devil’s Corkscrew is a bit steep and has a lot of switchbacks. I was doing fine for a while, and then my calves started hurting. Since I was in the front I was leading the pack, but only a few of the kids were still with me since I did not look back and wait for the other kids. The other kids were a lot lower on the trail, but Tarryn (the YCC crew lead and ranger) was with them so I went on. I then had to take a break and told the few that were with me to keep going and wait for me at the top. I took a two-minute break and kept going up without stopping. This was by far the hardest part of the trip. When I got to the top, the kids were there just hanging out and we waited for the others to join us. When the others got to the top of the Devil’s Corkscrew we took a break and headed to Indian Garden, where we saw another program, played in the creek, and played more Monopoly. It was a good day, but we had one more day to go. We woke up really early the next day and we only had 4.5 miles to get to the top. The kids were eager to get to the top, so I took the faster interns with me while Tarryn stayed with the others. We stopped every mile and a half and took breaks. During the last mile and a half I was exhausted. I knew that the kids that were with me still had energy, and told them that they could go ahead in front of me and told them to wait for me at the top. That last mile and a half to the top was hard, but I was also a little eager to get to the top so a was hiking faster than usual. When I got near the top I could see the kids, and I don’t know why but I sprinted the rest of the way. I was so happy and proud of myself when I got to the top. We then waited for the others to get to the top and cheered them on when we saw them. I was so proud of all of them, and am so glad to have been part of this. The kids did a really good job, and even though it wasn’t easy they all completed something that many others wouldn’t even dare trying.