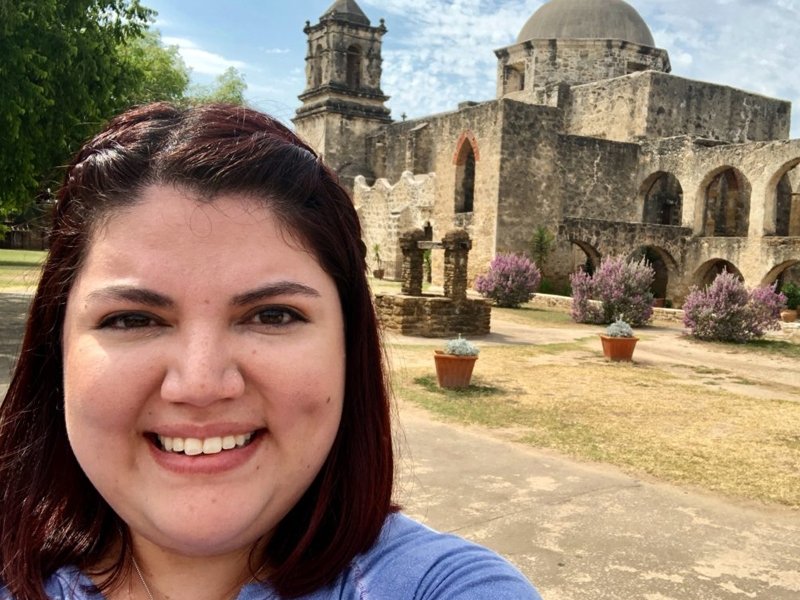 15 Jun Returning to My Roots

Posted at 00:24h in Blog by Alejandra Garza 0 Comments
0 Likes

Hello everyone! I’m Alejandra and this summer I am the Multimedia Outreach Intern at the San Antonio Missions National Historical Park. How did I get here? Well, let me tell you. As a product of the Texas public school system, I have had my fair share of Texas history courses. Texans learn about the unique history of this state in fourth and seventh grades.

Also, as an undergrad I was required to take two more courses on Texas politics and history. But that wasn’t enough for me. Now, I am earning my PhD in history and I consider myself a Texas historian. So I suppose all those years of Texas history had an impact on me. In addition, it led me to this internship! There were three reasons why I chose to take on this new adventure. First, I was intrigued by the Latino Heritage Internship Program’s mission, second I wanted to see what other options are out there for graduate degree holders, and lastly, I wanted to revisit my roots a bit.

Last January, as I was scrolling through the many departmental emails I receive daily as a graduate student at the University of Texas, I came across the Latino Heritage Internship Program’s (LHIP) call for applications. I immediately started doing research on who they were, what their mission was, and how I could be selected. I loved the idea that LHIP places Latin@ scholars from various disciplines across the United States at National Park sites. During the application process, I saw multiple sites that I could adapt my training as a historian too. Ultimately, one of my top choices was the San Antonio Missions through the Hispanic Access Foundation. This internship was the next step in my personal journey into public history.

Currently, I am pursuing my PhD in history at the University of Texas because I want to be in the “public history sector.” This means that my goal is to be hired in a place that educates the public, such as a museum, NPS, or other historical sites. It’s not a new concept but the conversation is one that really isn’t discussed often in grad programs. That’s why I was excited to see that LHIP wasn’t limiting their application to undergraduates. Grad school is often associated with wanting a career as a professor, but I think those skills can be transferred to any setting. People are inherently educators. We like to tell other people what we know and we want them to understand our point of views. As a historian, my goal is to educate people about South Texas ranching communities. As I’ve learned in my first week at San Antonio Missions NPS, ranching culture in Texas has its roots in the Mission era. (Young indigenous males took care of the Mission livestock and were the genesis for the cowboy or vaqueros.) Just like I’ve found the roots of my research at the Missions, I rediscovered my own too.

As mentioned before, I am a native Texan. I grew up in South Texas, an hour east of Laredo (where I was born), in the small town of Hebbronville. When I was ten years old, I took a field trip three hours up State Highway 16 to the big city of San Antonio. It was the first time I visited the Alamo and saw the film at the Rivercenter Mall at the IMAX theater. As a fourth grader, I remember being enthralled by the heroic stories of James Bowie, William Travis, Davy Crockett and the other “defenders of the Alamo.” But I didn’t notice that those “heros” didn’t share my identity. It wasn’t until my higher education that I really saw the lack of representation in the history I was taught as a child. In seventh grade, we once again traveled to San Antonio, but this time we went to other Missions. While we did learn about the establishment of the Missions more, I still didn’t learn about the group I identify with most: Tejanos. Tejanos were the distinctive group of people who emerged through the cultural changes that occurred when Europeans (mostly Spanish) intermingled with the indigenous population. Today, the Tejano culture has spread across South Texas and is most vibrant where it began, in San Antonio.

I’m excited to see where my internship takes me this summer. LHIP gave me the opportunity to explore a world outside my graduate school bubble. I’ve met so many inspiring people already and it’s only been a week! I hope I continue to learn and fill in the gaps left from my days in grade school. Aside from relearning the history of the San Antonio Missions, I am reconnecting to the culture that I grew up with and identify with.