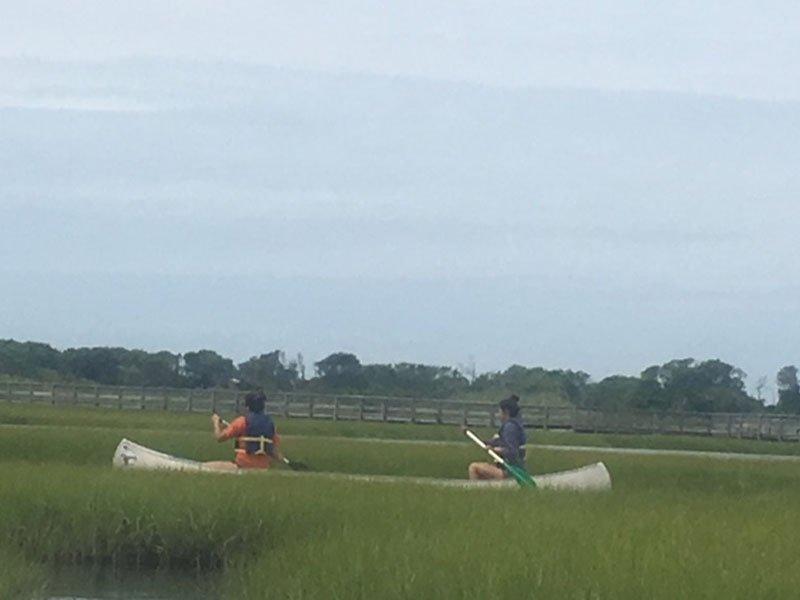 Posted at 15:47h in Blog by Roxana Saravia 0 Comments
0 Likes

“There is nothing like returning to a place that remains unchanged to find the ways in which you yourself have altered.”  – Nelson Mandela

This quote resonates with me because I returned to Fire Island National Seashore (FIIS) with a few doubts about whether I would be able to continue growing. I have had people ask me why I would return to a park that I previously interned at; wouldn’t I just be doing the same thing? So far, this season has been relatively different. I’ve learned more about the resources FIIS has to offer. I’m also more involved in park science. Returning to a park where I’ve worked before meant that I had less “basic” learning to do, and that I was able to focus more on the areas I knew I wanted growth in.

A newly acquired skill that I’m proud of is canoeing! A few weeks ago, most of the interpretive staff as well as some resource management interns underwent a Red Cross canoe safety course. The course was super hands-on, exhausting, and wet. Amy and I were paired together because we were both first timers. The beginning was very rough, but by the end we seemed like professionals. I felt that this course was a great team builder because you really need to be able to communicate with your fellow paddler. One of the most intense parts of the course was when we had to learn how to flip over a canoe that had capsized. It required someone to take charge and command the situation (it also required a lot of arm strength). It is important to know how to properly do this because we regularly work with the public and not everyone is an experienced canoeist. After this training I’m confident that I would be able to help someone in need.

I’m thankful that I’m surrounded by park employees who encourage me to grow in several ways. Reflecting on my experiences last season I can see the growth I have undergone. On my first day as an LHIP intern last season I was very quiet. I have definitely come out of my shell. I have more of an idea as to what I want, and I am more vocal about it. I’m not as intimidated when it comes to playing my part.