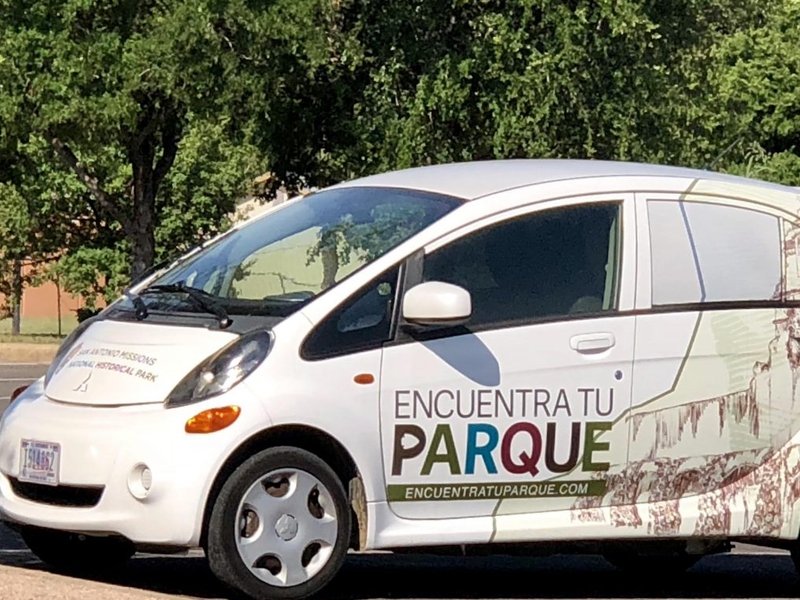 Posted at 00:14h in Blog by Alejandra Garza 0 Comments
0 Likes

When someone mentions the National Park Service, the first ones that come to mind are Yosemite, the Grand Canyon, and Yellowstone. They are parks where visitors are immediately immersed in the wonders of nature. On the other hand, San Antonio Missions National Historical Park is six minutes from downtown San Antonio and each of the four missions is situated in a neighborhood. Yet, Missions NHP still has plenty of nature to offer and is dedicated to environmental conservation and sustainability.

One way the park became more environmentally friendly was through their vehicles and equipment. In 2003, Missions NHP started replacing their vehicles with more fuel-efficient and alternative fuel models. Currently, the park has three hybrid vehicles, five propane pickup trucks,a neighborhood electric vehicle and one plug-in electric vehicle (PEV). Propane is a better fuel source than traditional gasoline because it has a lower carbon content. The park has its own propane fueling station and two PEV charging stations, one which is available to park visitors at the Mission San José Visitor Center.

The Visitor Center also contributes to environmental sustainability because it operates on solar energy. The solar panels were installed last December, along with an informational exhibit to educate visitors. In just seven months, the solar panels have saved the park over $2,000 and their carbon dioxide offset is equivalent to 326 trees grown and 34,838 miles driven. The energy produced during that time is also enough to power 74 homes in Texas. The display also encourages visitors, especially young ones, to think about the benefits of renewable energy.

Missions NHP is at the forefront of sustainable parks. They were the first in the National Park Service to install a PEV charging station and were the first national park in Texas to meet the requirements of the Climate Friendly Parks (CFP) program in 2013. Currently, their vehicle fleet is almost 50% alternative fuel and they want to continue phasing out traditional gasoline vehicles. Missions NHP’s urban setting motivates them be an example and educate visitors about environmental conservation and sustainability.