As I previously have written about on this blog, community partnerships at a national trail–especially the Anza trail–look different from the typical model of “outreach” at many NPS sites. For, rather than bringing something–managed, protected, and interpreted by us–to different communities, building trails inherently requires the active participation and collaboration of communities. We’re constructing something together!

These past two weeks, my work within this realm of partnerships has only further illuminated the centrality of community partnership. Moreover, it has demystified much of the daily processes that go into constructing physical interpretive spaces along a trail.

Last week, I had the wonderful opportunity to, alongside my supervisor, meet with an incredible nonprofit organization, Amigos de los Rios. This group has the vision of creating an “Emerald Necklace” in the Los Angeles basin. Following the lead of the 1929 Olmstead Bartholomew plan for an expansive greenway in Los Angeles, the Emerald Necklace is a plan to connect greenways and parks that descend from the San Gabriel Mountain and run parallel to the San Gabriel, Los Angeles, and Rio Hondo rivers. Ending at the ocean, the “emerald” of the necklace is Santa Catalina Island.

Thanks to the tireless work of Amigos de los Rios, alongside work from the LA County Department of Parks and Recreation Trails program, the Emerald Necklace is slowly being realized as more sites are constructed and restored throughout the Basin. In this context, one of the spaces I mentioned in my blog last week–Campsite 61, which today is a small, restored area outside of an elementary school in El Monte–comes into fruition. This site was designed by the Amigos, and is managed primarily by the County of Los Angeles. This site is also the exact location of an important campsite along the Anza trail.

In 1776, as the Anza settlers were traversing the land from their starting point in Mexico, beginning some of the first settler-colonial outcroppings in California, an important beacon of civilization and abundance was the San Gabriel Mission. By the time of the Anza expedition, this mission had already been established for a few years–the settlers were greatly looking forward to reaching the Mission after having traveled through so many remote deserts. However, in order to get to that Mission, they had to cross the San Gabriel River. This crossing was made complicated by the fact that the expedition had a particularly tough time crossing the nearby Santa Ana River and had lost a significant number of saddle animals. Moreover, Anza had just learned of a massive resistance event of Kumeyaay incarcerated at the San Diego Mission. As the Anza settlers thus arrived at the banks of the San Gabriel, the modern setting for the Amigos park, there was an air of multi-layered turmoil and anxiety.

Telling this story at the Amigos site allows us to share important lessons about the state of Spanish colonial society at the time of the Anza expedition. We uncover a history that is more complex, less shapely, and less narrated than the neatly divided periodizations–the Spanish era, the Mexican era, and the American era–through which we often frame California history. Colonialism has always been contested, as have geographies itself. Stories of hearsay of Indigenous resistance help show the nascent and archipelagic status of the Spanish in California–a much different image than the detached, zoomed-out colonial territory maps that label all of western America as Spain.

Given our vested interest in telling this story, our partnership with the Amigos has been wonderfully fruitful. At our meeting, Robinson explained the agreements and permitting processes the site has with the local school district and other bureaucratic agencies that own parcels of land affected by the park. Through this connection, my supervisor and I were able to join a later meeting with the LA County Trails Division to further discuss what collaborations and partnerships could look like. We were explained the process of folding our interpretive narrative and signage plans. Suddenly, ideas that were largely conceptual in nature began to manifest through permits, MOU alterations, and the need to contract out for possible online interpretive content.

Through this process of planning for interpretation and working with partners to realize it, I have had the privilege of building something new–in a collaborative, engaged, and respectful way. Trailbuilding means building community. 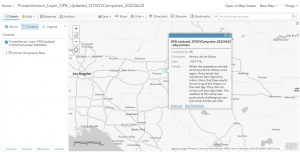 Work in progress of my GIS project in the SGV for the Anza trail–specifically, cleaning some data describing the expedition campsites in the SGV.