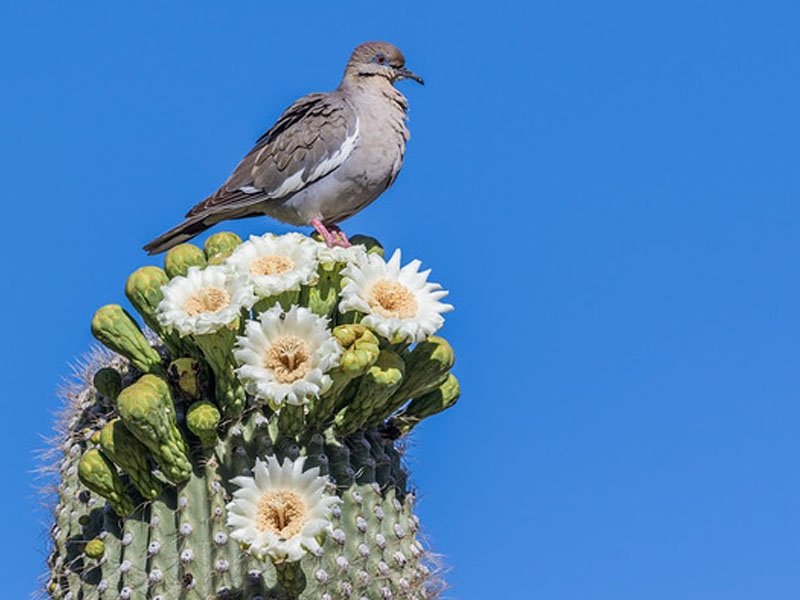 It’s been a month to the day that I finally learned the name of the birds that I’ve spent my lifetime of summers with. Before then, I never knew what to call these grayish-brown and round, ruler-long morning risers. But I did know that every year, a few months before summer rains, they would return with their songs. The songs that have been the score to my summers for seasons.

Saguaro biologist, Don Swann, and I went out for phenology on a Saturday morning in May, when he passionately pointed out a nearby bird as the White-winged Dove. He proceeded to share his knowledge about the dove’s synchronistic migration into the Sonoran Desert with the reproductive cycle of saguaro cactus. And the fascinating fact that these doves derive so much of their nutrients from the saguaro fruit, that their tissues become almost indistinguishable from that of the saguaro. I remember sensations of intrigue and awe in that moment, standing beside Don, beneath a White-winged Dove perched atop a flowering saguaro, singing its summer song.

Western White-winged Doves travel from their winter homes in southern Sinaloa, to Guerrero and Oaxaca, to the Sonoran Desert, arriving as saguaros begin blooming in April. White-winged Doves appear to fly directly, over 1,000 miles, from wintering to breeding grounds and vice versa. They travel north in the spring along the Pacific coastal plains and along the foothills of the Sierra Madre. The migrating flocks usually number from a few birds up to 50 individuals, but flocks as large as 4,000 have been seen. The stimulus for migration is not well understood; white-wings become more and more restless as September approaches and they fly south by early in the month. Once it gets started, the migration happens quickly. The return trip is swift and direct along the foothills and mountains of the Sierra Madre to Sinaloa then south along the coast to Oaxaca.

The western White-winged Dove is unique among migratory pollinators because it is also a game species. They are intensely hunted in their breeding range in Sonora and Arizona, and in their wintering range in western Mexico. The dramatic White-winged Dove population fluctuations in Arizona in the last 150 years can be explained largely by changes in human perceptions of doves – as pests, game, or fragile resources; and by how humans have used the land that they share with doves and saguaros. Despite this, White-winged Doves have some impressive survival strategies. These birds can fly 25 or more miles to find water. They can suck and swallow water without moving their heads. Both parents may consume snails and bone fragments to help their bodies create the nutritious fluid.  And they use a secretion from the esophagus, known as crop milk, to feed nestlings. When a predator comes to call at the nest, White-winged Doves may feign a broken wing to lead the intruder away. In other situations, they escape by flying directly into the bushes.

The more I learn about paloma pitayera, the White-winged Dove, the more I feel the sensation of that initial intrigue and awe from learning its name, and the more that the sensation of knowing that this is just the beginning deepens.