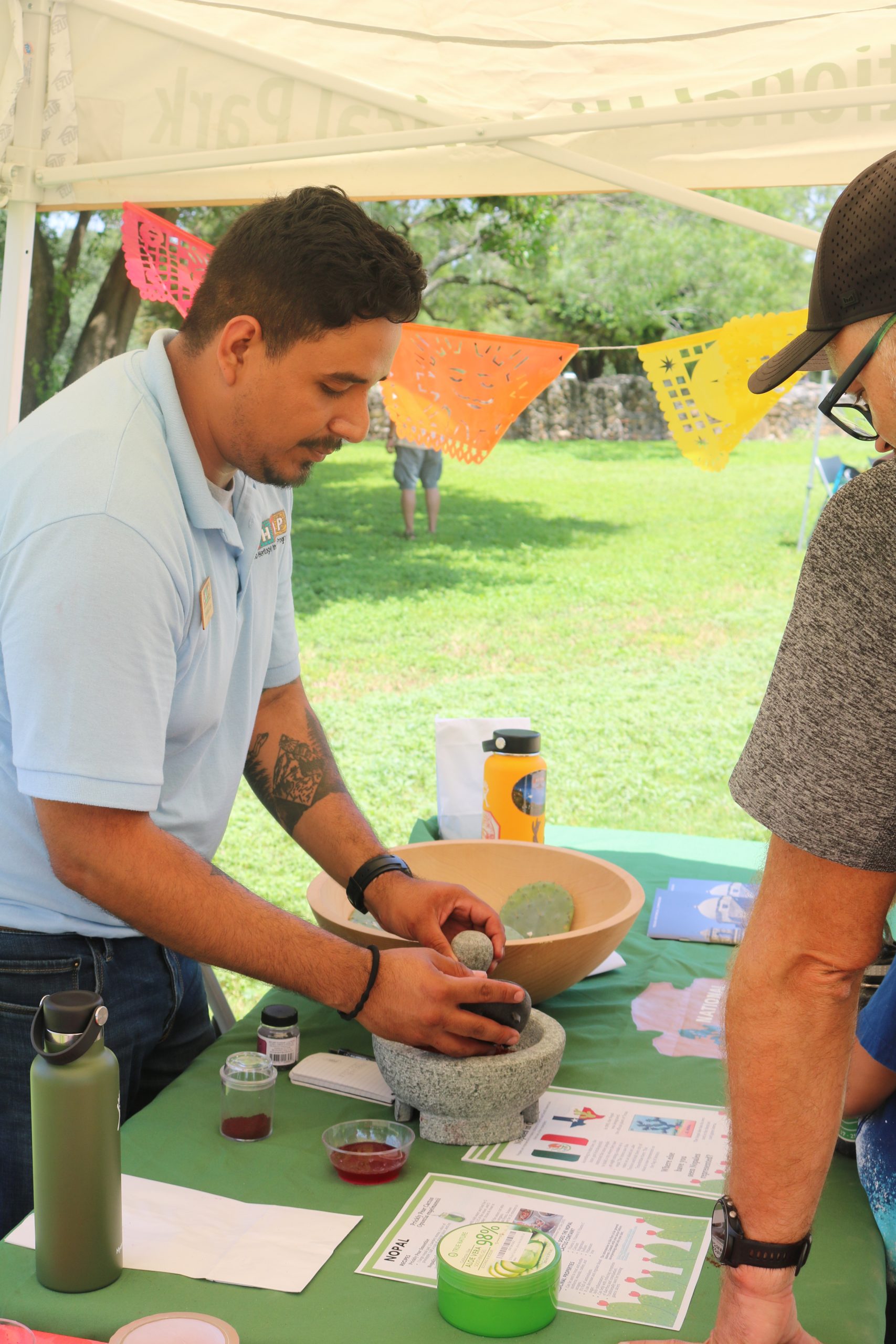 Latino Conservation Week was a great success this year at the San Antonio Missions National Historical Park. This year, guests had the opportunity to walk along a trail at Mission San Juan and visit with organization such as Latino Outdoors, Salsa Squad, Compost Queens, Texas Conservation Corps, REI, Texas Parks and Wildlife, and more to learn about local sustainability, conservation, and native plants.

At my booth, we focused on highlighting the interesting history and utility of the cochineal, a small bug that lives on prickly pear cactus pads. Indigenous Latin American cultures in utilized cochineal during the pre-colonial era as a natural red dye. During Spanish colonization, cochineal became a valuable commodity and became the second or third most exported item out of Latin America. The dye produced by cochineal was used to dye fabrics, food, and to produce red-color paint and cosmetics all over Europe by the eighteenth century.

To show the versatility of cochineal, we had an activity that allowed guests to paint with a mixture of cochineal and water or cochineal and aloe vera gel. To create the red dye and paint, we crushed dried cochineal bugs using a molcajete to create a powder. Mixing the powdered cochineal with water created a dye that could be used to dye fabrics and textiles red. Mixing it with aloe vera gel created a paste that was used by visitors to paint. Visitors painted the facade of Mission San Juan using a stencil or showed off their artistic abilities by free-handing beautiful works of art.

Aside from our painting activity, we informed visitors of the versatility of the prickly pear cactus, or nopal in Spanish, and how it is seen and represented in different cultures. We also handed out information flyers that included a nopalito salad, a nopal smoothie, and medicinal purposes of the prickly pear cactus. On the reverse-side, we incorporated the Aztec story of the creation of their city Tenochtitlan and how that story came to be represented on the Mexican flag, which incorporates an eagle perched on a nopal while eating a snake.

It was a great experience working with our partners to showcase the importance of native plants, conservation, and local sustainability. This was my first time participating in Latino Conservation Week and I hope I am able to participate again in the years to come.