I wandered up and down long aisles of a chilly room, with shelves in every corner stacked high up to the ceiling. It smelled faintly of an old library, or of a museum of curiosities – and in a way, that’s exactly what it was. On my tour of the Klondike Gold Rush NHP collections, I had the privilege of learning about all the work that goes into preserving a park’s history and making that information accessible to the public. 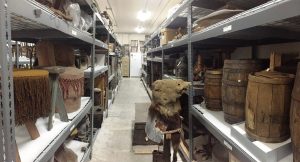 I began with a talk with Lisa, who is in charge of the collections. She gave an overview of the terminology – apparently, most of us probably refer to “museums” when what we probably mean is “galleries.” Behind the creation of a gallery is so much work and knowledge: archaeology, preservation, curation, archives, and research. All this is behind the work that I do, in interpretation and education. Klondike Gold Rush NHP has an unprecedented number of museums – 18 – for a national park of our relatively small size.

The first thing that shocked the rangers and me was a large old stove sitting in a corner. When we asked where that stove was from, Lissa responded, “That’s the original stove from the White Pass – Yukon Train Depot.” Gasps of surprise echoed from myself and the others. All season, when people had been asking us if the coal stove in the visitors’ center and historic train depot was original, we had been telling them that it was. But in fact, it was a replica of the original that we were seeing at that moment, complete with its crack down the middle and creaky hinges. The decision to create a replica had to do with protecting the original from deterioration and allowing visitors to interact directly with the stove, instead of having to put it behind a glass case.

We also saw some baskets that had been made and traded by Indigenous Tlingit and First Nations people from the interior. One was a birch bark basket. Although birch does grow locally, it’s not the most common material used in basket weaving within Tlingit communities, so it was likely traded from further north or from the interior. Another basket was made from spruce, and its condition was pristine, with a white ribbon wrapped around the top. It is suspected that the basket was created with the intention of being a trade curio and was meant to mimic the style of a ceramic vase, with its skinny neck and wide base. It’s clearly not very practically useful as a basket, but it could have been decorative. The last basket we saw was a well-worn spruce basket. It was likely used very frequently and discarded at the end of its life. These baskets tell a story of trade, migration, and sharing of art forms and culture.

In another building, we visited the curatorial interns in their lab. They are working on restoring ship manifests with the end goal of uncovering exactly how many people came here during the gold rush. Our park is in possession of a massive amount of ship manifests – aisles filled to the brim with boxes full of papers – for context, we have more ship manifests than the San Francisco Maritime Museum. And they have a lot. In these records, one interesting find was a receipt for groceries, where a single egg cost around $25. It’s good to know that while inflation has increased since 1897, the price of eggs in Skagway has gone down.

Finally, we paid a visit to the natural history collections. Ecologically, Klondike Gold Rush NHP sits at one of the most unique places in the world, at the intersection of the dry subarctic interior and the temperate rainforest. Within the park’s boundaries are 766 distinct lichen species, more than anywhere else in North America. 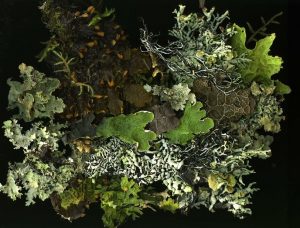 In these collections, I saw a bird’s nest with bright pink feathers integrated with beige sticks and twigs. The feathers came from the boa scarves of showgirls from the historic Days of ‘98 show. Ultimately, human history and environmental history are not separate from one another – in fact, this nest shows just how closely intertwined they are.

The challenge for historic preservation in the coming years is climate change. Alaskan summers are getting hotter and hotter, and with this heat comes humidity. The rooms where artifacts are held need to be chilly and dry to protect them. But as the climate becomes increasingly unpredictable, artifacts are at significant risk of deterioration.

I’m very grateful to have had the opportunity to tour such vast and diverse collections of all kinds and discover the invaluable work done by other departments at the park!