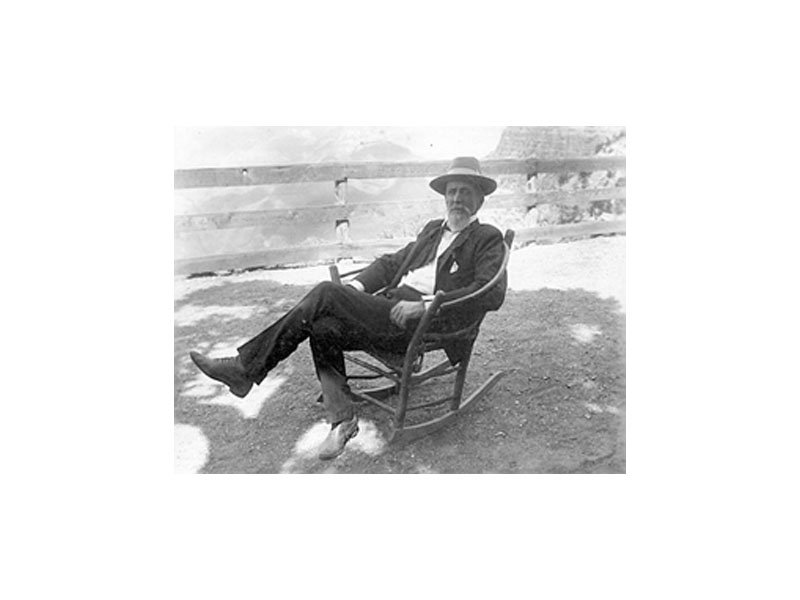 I gave a ranger program during my time here, and this is how it went. I wanted to talk about someone who was like me, and when I heard about John Hance I knew that I had to share his story with others. John Hance was the first non-native to settle down at the Grand Canyon.

He came here for mining purposes, but later found out that it was easier to mine silver from people’s pockets than it was to mine asbestos and copper from the canyon. The reason why he was so famous was because of his gift of telling stories, more specifically, telling tall tales. He told some wild stories, like how he got to the canyon by riding on a buffalo for two weeks straight, how he dug the Grand Canyon after chasing a pesky prairie dog that was eating his crops, or when he was being chased and the only way to escape was to jump over the canyon on horseback. These were just a few of the stories that he told visitors. I like him alot because he was such an interesting and odd character. He appreciated and loved the canyon so much that he decided to live here when there was no one here. Another reason I like him is because he was very kind to others when he had little to no money. A quote from a friend of his was “even though he rarely had money you would never go to John Hance without getting something to eat, white, black or native American.” He would then become a tourist attraction because of the tall tales he would tell the visitors. Fred Harvey hired him and was giving him a room and board as long as he kept doing what he did best, telling tall tales. He was himself, and didn’t care that his stories sounded crazy. He did what he loved and got paid for it; that’s living the dream right there. When I started my research it was a little difficult considering that Hance was kind of a mystery; even his birth year is not one hundred percent certain.

I had a giant binder full of information that I read all the way through, and the only things that I found out for certain were that he was the first non-native to settle down at the canyon, he told tall tales, and his death date. I spent a good two weeks just researching him and preparing my talk. I practiced with the YCC kids almost everyday, and I felt good about it. When the day came, I gave the talk on the porch of El Tovar, where not a lot of people showed up but it made me even more confident. I gave my talk and it went pretty well in my opinion. If I do come back next year, I will definitely talk about him again.