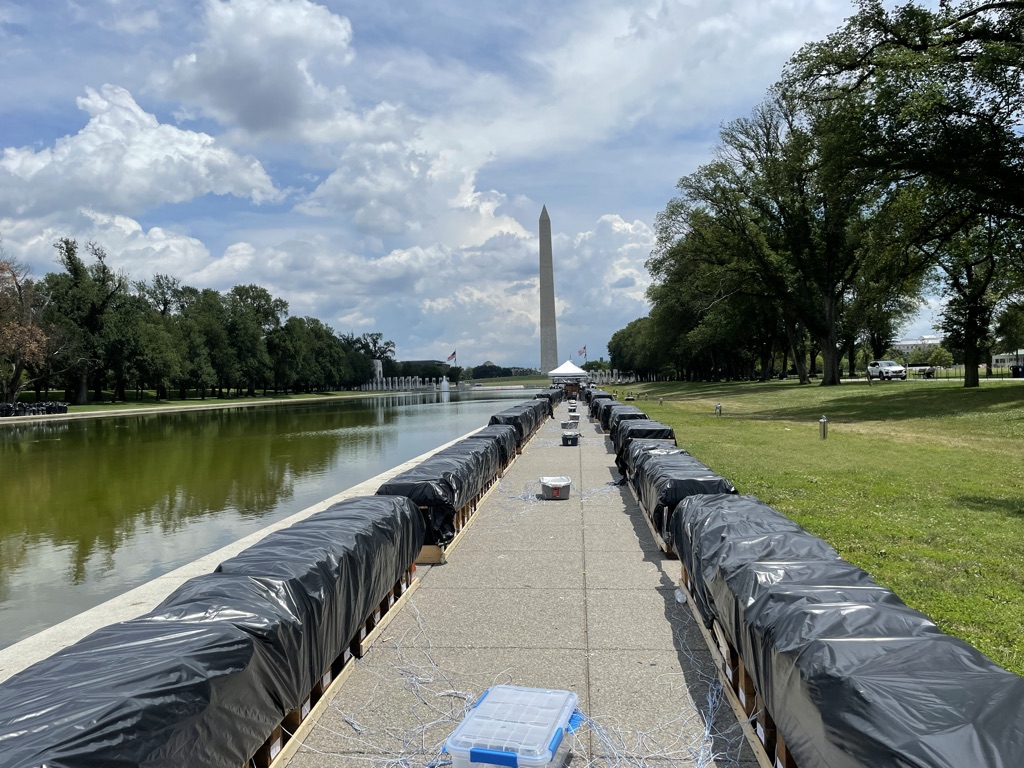 Did you have fun watching the 4th of July fireworks? One of the most amazing shows took place right here, in Washington DC. Last year, the pandemic forced the National Park Service to ask people to stay home and watch the Independence Day fireworks show virtually. But it was back on this year, with tens of thousands of visitors watching it live at the National Mall or the surrounding areas. And I got to see a little bit of the “magic” behind the main event.

On Thursday and Friday, I shadowed Mike Litterst, the National Mall’s public information officer (or spokesperson). Before I get into the story about what I was able to see and experience, I want to take a second to say that Mike is one of the greatest PIO’s I’ve ever met! He is just incredible at his job and so passionate about the National Mall, history, and the NPS. He is also a local celebrity (he jokes that he is a D-list celebrity in DC but I think he is more on the C-list, especially during these events). Every news reporter and NPS employee knows him. And when I say, everyone… I mean… EVERYONE! Everywhere we went, people came to say hello. Every interview he gave, they already knew him. A very charismatic and fun person to work with, for sure!

On Thursday, we went to a City news conference about the 4th of July event. Several city, fire, and law enforcement officials were present, as well as Mike (who was there to represent the NAMA/NPS). During the news conference, the Police Chief said that the entire police department would be working on Sunday for the event, not just at NAMA, but in the surrounding areas as well. He also said that while there weren’t any specific threats targeting DC, they were paying close attention to make sure everyone was safe. Officials also talked about traffic issues. Since a lot of streets would be closed to traffic, they wanted to make sure people were planning before heading out to watch the fireworks. However, because the Independence Day Parade was canceled, not as many streets were closed and there were also fewer fenced areas around the Mall this year.

This year, the fireworks were launched from both sides of the Lincoln Memorial Reflecting Pool. To be honest, the exact number of fireworks is unknown (or at least no one on Thursday really knew out of the top of their heads just how many of them were set up) but they were a whole lot! They were securely anchored and covered with plastic. On top of being able to see the fireworks set-up, I was able to meet several NAMA employees and staff working diligently to make sure the show would run as smoothly as possible and everything went according to plans.

On Friday, Mike was a little busier than he expected to be. There was a storm overnight that caused trees to fall down and there were some worries that it might’ve affected the fireworks. The storm brought down countless tree branches and even some trees in the area of the National Mall. It also blew over fencing, tents, and port-a-potties. But, thankfully, the storm didn’t do anything to the actual fireworks, which were still perfectly anchored and protected – ready to be launched on Sunday. Mike did a few interviews throughout the morning with several news stations, ensuring viewers that “yes, everything is alright!” and that the NPS would have everything cleaned up before the main event.

The last really fun thing I got to do with Mike was: going up the Washington Monument. The elevator took us to the top floor and we almost walked down the stairs but I couldn’t do that to my feet since I was wearing not-so-great-for-walking boots (and there are 897 steps!). But, I was promised a “next time” (and I will definitely bring my sneakers). The monument is the tallest structure in DC and the tallest obelisk in the world. It was also the tallest structure in the world from 1885 until 1889, when the Eiffel Tower was finished. The interior walls have commemorative stones from individuals, civic groups, cities, states, and countries that wanted to honor the memory of George Washington. We saw some of them while on the elevator.

The best part though? the VIEWS! D.C., Maryland, and Virginia are visible from the top of the Monument. Take a look!