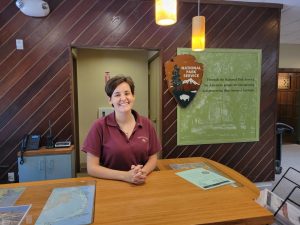 Not yet in uniform, but proudly representing LHIP and Texas State University.

After a long 1,400 mile road trip with my wonderful mamma, I have finally arrived at Fort Raleigh National Historic Site in Manteo, NC. Although still in the south, I could not feel further from home, (Dr.Pepper should be available at every restaurant!) but I already know I’ll be surrounded by the best people. My first week on the job introduced me to my two roommates, Tara & Lulu, coworkers, Josh, Mike, Paul, Tommy, Jack, Cheryl, and Cathy, and tons of amazing reptiles and amphibians I have unapologetically observed for hours! I have never lived so close to a beach before and the constant breeze from the ocean is refreshing from the brutal Texas sun.

While this post was made during the start of my third week, I am still learning so many things. The Outer Banks National Park staff are the most accommodating and wonderful individuals who are focused on allowing me to not only adjust to my site but also to the surrounding area as well. Fort Raleigh, while smaller than the other two OBX Parks (Wright Brothers NM and Cape Hatteras NS), is overflowing with history and nature. Nestled on the north end of Roanoke Island, the site interprets the English’s first attempt at colonization in America, the Civil War battle which gave the Union control over the Outer Banks, the Freedman’s Colony established in 1863, and the experiments done by Reginald Fessenden, the father of voice radio and creator of the AM signal. Like most visitors, I was only familiar with Sir Walter Raleigh’s Lost Colony but within the first week was overflowing with knowledge which I happily share with visitors. In addition to our National Park Site, the area around the visitor’s center is also home to the Waterside Theatre, where tourists come to watch the historic Lost Colony drama and the Elizabethian Gardens, a natural memorial to the 117 men, women, and children lost to history in 1587.

While not my first time being away from home, this will be the longest time I have spent away from Texas. Though much different than my home state, North Carolina is by no means a bad place to spend my summer, and I look forward to the many adventures that lay ahead. I have already had the pleasure of exploring two National Wildlife Refuges, an aquarium, a National Seashore, and the Wright Brothers National Memorial and will be utilizing the spare time I have to continue to seek out all the area has to offer.