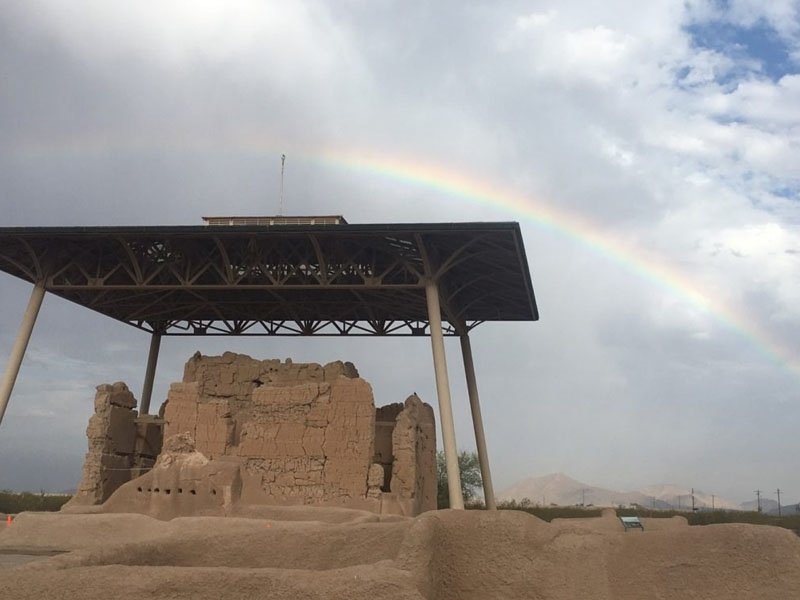 Posted at 16:49h in Blog by Miriam Lagunas 0 Comments
0 Likes

After waiting for what feels like a long time, monsoon season has finally hit Casa Grande Ruins! We have been having haboobs, a phenomenon similar to sandstorms, and thunderstorms. Though this brings a lot of humidity to the area, it feels great to finally have rain and see some green at the park. It is week eight and it has suddenly hit me, my time at the park along with what has turned into my busy daily routine will soon be coming to an end.

As I mentioned in my previous post, we had the Four Southern Tribes crew join us for five weeks to help with some park projects and in addition, took a few days for educational field trips in Tucson and Phoenix. We took a trip to the Desert Laboratory at Tumamoc Hill, the Laboratory of Tree Ring Research (LTRR), Arizona State Museum (ASM) and Pueblo Grande. Though I absolutely enjoyed every field trip, visiting ASM was such a beautiful experience.

ASM is the largest and oldest anthropology museum in the Southwest, exhibiting a large collection of Native American artifacts in the region. As we walked through aisles of displayed pottery, textiles, jewelry, and everything you expect to see in pre-historic museums, I was honored to hear from each member of the crew and their personal experiences challenging some of the interpretations and relating to what was displayed behind the glass cases. The traditions, stories, and knowledge passed down through generations all came alive as we walked through different exhibits.

This past week, in honor of Latino Conservation Week, we hosted a bilingual hands-on brickmaking workshop. Despite our low visitation season, we still had visitors stop by and take a break from the sun to get their hands dirty and make adobe bricks. Visitors made their bricks by hand, using a brick form made out of wood. After smoothing out the top with a trowel, they decorated the brick and put it out in the sun to dry. I was very pleased with the support I had from the park to put together an event at Casa Grande Ruins for the first time and represent Latino Conservation Week.

This past month, I have also had the pleasure to contribute to the Barrio Viejo National Historic Landmark Project in Tucson by creating a database to map Jewish community presence in Barrio Viejo from the late 1800’s to early 1900’s. With the help of old directories and Sanborn Fire Insurance Maps, I have been involved with what feels like time traveling and along the way gathering and recording Jewish names, years, and occupations.

Barrio Viejo is a neighborhood of traditional mud adobe Sonoran architecture. This neighborhood was once home to a diverse community, including Jewish, Chinese, and African-American residents along with Mexican-Americans. With the push for development in the 1960’s, also known as “Urban Renewal”, many local small businesses and homes were demolished and hundreds of people were displaced. Listing Barrio Viejo as a National Historic Landmark will help protect the surviving area from expanding development and will keep its presence and culture alive for future generations.

For more information you can read more about this project from last year’s LHIP intern, Alexander La Pierre, who worked very diligently on the Barrio Viejo project.