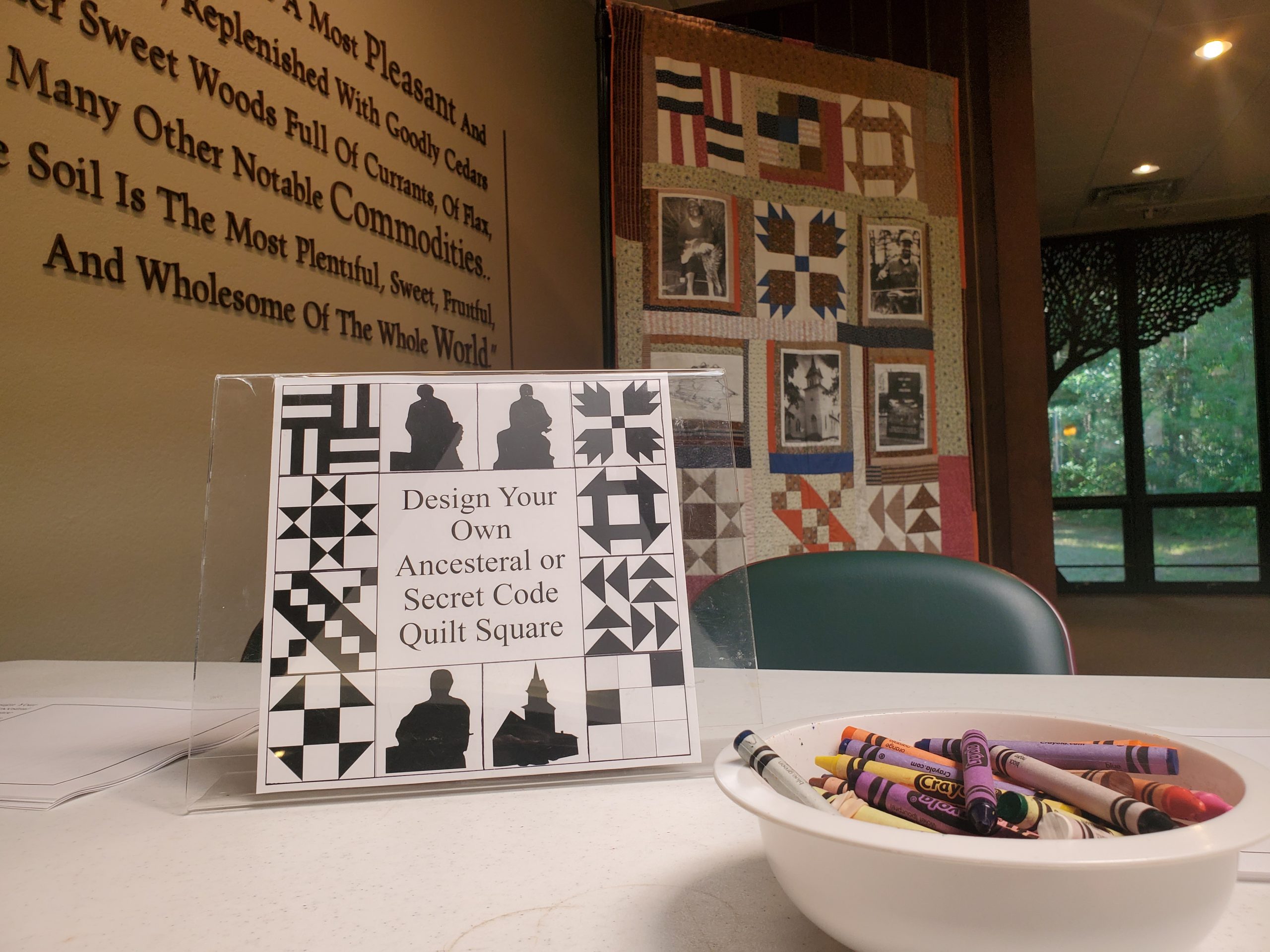 Young visitors explain the meaning behind their secret code quilt squares during our Juneteenth celebration.

One of the early lessons I learned when first beginning to present my Freedmen’s Colony program is that it is hard to get people to care about something they are unfamiliar with. Whether it be the most recent social movement, an indie film, or historic narrative, if the subject is unfamiliar, people are not easily persuaded to listen. Fort Raleigh NHS, known for its connection to the story of the Lost Colony of Roanoke, also interprets the history of the Civil War, Freedmen’s Colony, and voice radio experiments of Reginald Fessenden, the “Father of Voice Radio.” Despite these numerous narratives, visitors who travel to the site come eager to learn more about the iconic “American mystery” of the 1587 expedition.  Unfortunately, because of this pre-determined learning objective, guests are often unaware that history does not stop with the disappearance of the English colony and thus ignore the rest of the interpretation the park has to offer. 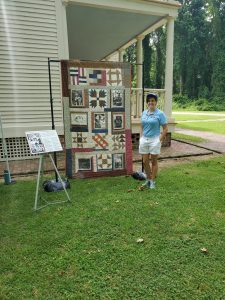 This has led to low turn outs to the Freedmen’s Colony talk and some rather disappointing days at work. Despite this frustration, our rangers, volunteers, and I are determined to make the history of the Freedmen’s Colony just as enticing as the well-known story of the Lost Colony. During my second week of work, I participated in a day long training on interpretation and one of the key takeaways from the program was the use of an “interpretive dog” to gather interest for programs. While this breed of dog does not provide years of unconditional love and happiness (shout out to Jazzmine), it can be used as a tool to encourage guests to initiate interaction with the employee, thus increasing the likelihood that interpretation occurs naturally. Like the furry pet, an interpretive dog is a bridge between two people who otherwise would not have connected had their not been a friendly animal (or in this case, interest peaking object) in the possession of one party.

After several low turn outs to Freedmen’s presentations, staff and I have been tirelessly brainstorming ideas for interpretive dogs to use to gather interest for the 19th century colony. During the month of June, we are displaying a commemorative quilt, donated and created by descendants of the Freedmen’s Colony, and have centered our efforts around its popularity among visitors. During our Juneteenth celebration, we displayed the quilt outdoors by the Underground Railroad monument, and throughout the remainder of the month  have it on display in a prominent place indoors to encourage visitors to view the craftsmanship and history of the piece. Unfortunately. this has done little to increase the turn out to the programs, so this week, I developed and began offering a hands-on activity in the visitor’s center which ties into the history of the quilt. The activity asks guests to 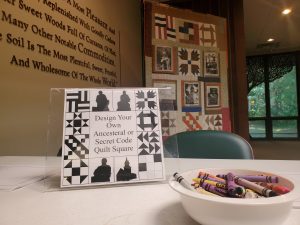 design their own quilt square either meant to give someone directions (like the legend of the secret code quilts of the Underground Railroad) or to honor their ancestors (like the quilt on display). Guests then have the option of taking their artwork home or leaving it with us so that we can create a paper quilt out of their squares when it is time to return the piece to the archives. My plan is then to use these guest created quilts to gather interest in the Freedmen’s Colony programs by displaying them outdoors before talks or somewhere visible indoors.

While this is my most recent development, I have also been utilizing a dialogic question, another element I learned from the interpretation workshop, to gather interest for the Freedmen’s Colony program. For the past several weeks, I have left a whiteboard out on display (my first attempt at an interpretive dog) with the question “What Do You Value?” written on top. I then plant a few answers to take away the fear of being the first to write, and leave it adjacent to our welcome desk, so guests see it but don’t feel like they are being watched while writing. When I am near the board, I encourage visitors who stop to look at it to write their answers down so that I can use them for the Freedmen’s talk, which typically leads to the individual 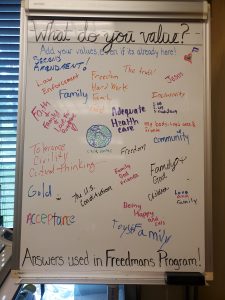 questioning what that program is about. While this tool has not proven to have a significant impact on program attendance, it is beneficial in its ability to allow me to create a stronger argument for “why this matters”. The answers visitors write down typically parallel with the reasons for why escaped enslaved peoples journeyed from across the state to settle on Roanoke Island. By linking our modern day values with the values of the men, women, and children who sought refuge here, people who choose to attend the talk can better relate to these pioneering individuals who experienced many hardships during their lives.

While the Freedmen’s Colony program may not be as enticing to visitors as the great mystery of the Lost Colony, I like to be challenged and am excited to continue brainstorming ideas. Even with only a month left in my internship, I am confident that before I return back home to Arlington, Texas the Freedmen’s Colony program will regularly have attendance in the double digits and become the highlight of visitor’s experiences here at Fort Raleigh.