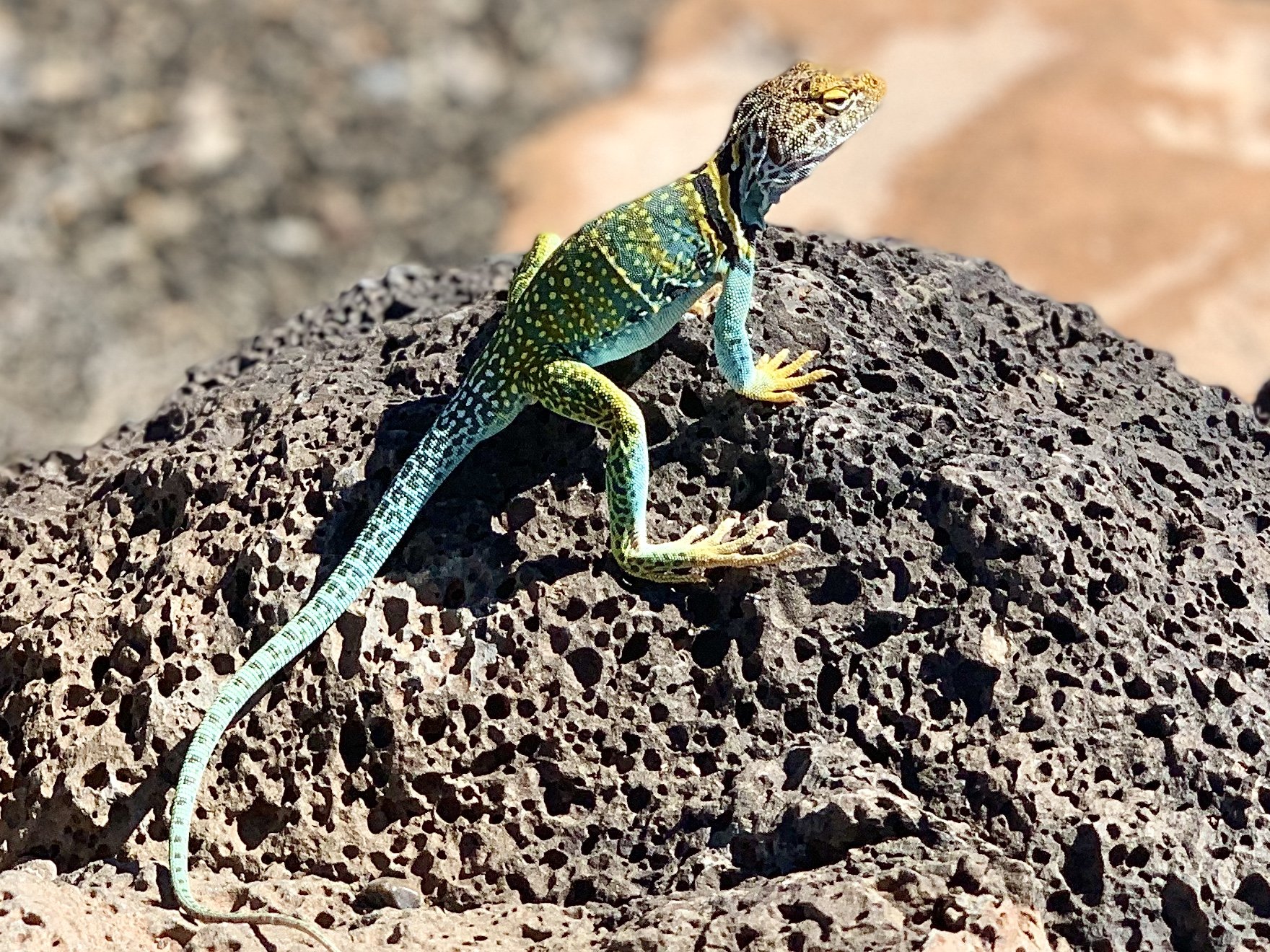 I hope everyone is doing well. I’ve been having an amazing time working at Wupatki. One of the things I’ve loved whilst being here, is all the different wildlife. I’ve seen many different types of birds and mammals, but my favorite animals I’ve seen have been the reptiles. About twenty species of lizards and snakes live in Wupatki and Sunset Crater Volcano National Monuments, but I’m only going to show the ones that I have seen the most.

The most common lizard of the monuments is the Side-blotched Lizard. This small dark green or grayish lizard has dark blue or black spots on each side behind the front legs. The male has a blue speckled band down its back. The Side-blotched Lizard eats Insects, ticks, and scorpions. I’ve mainly seen this lizard in the front of the visitor center of Wupatki and on my walks back to my apartment. 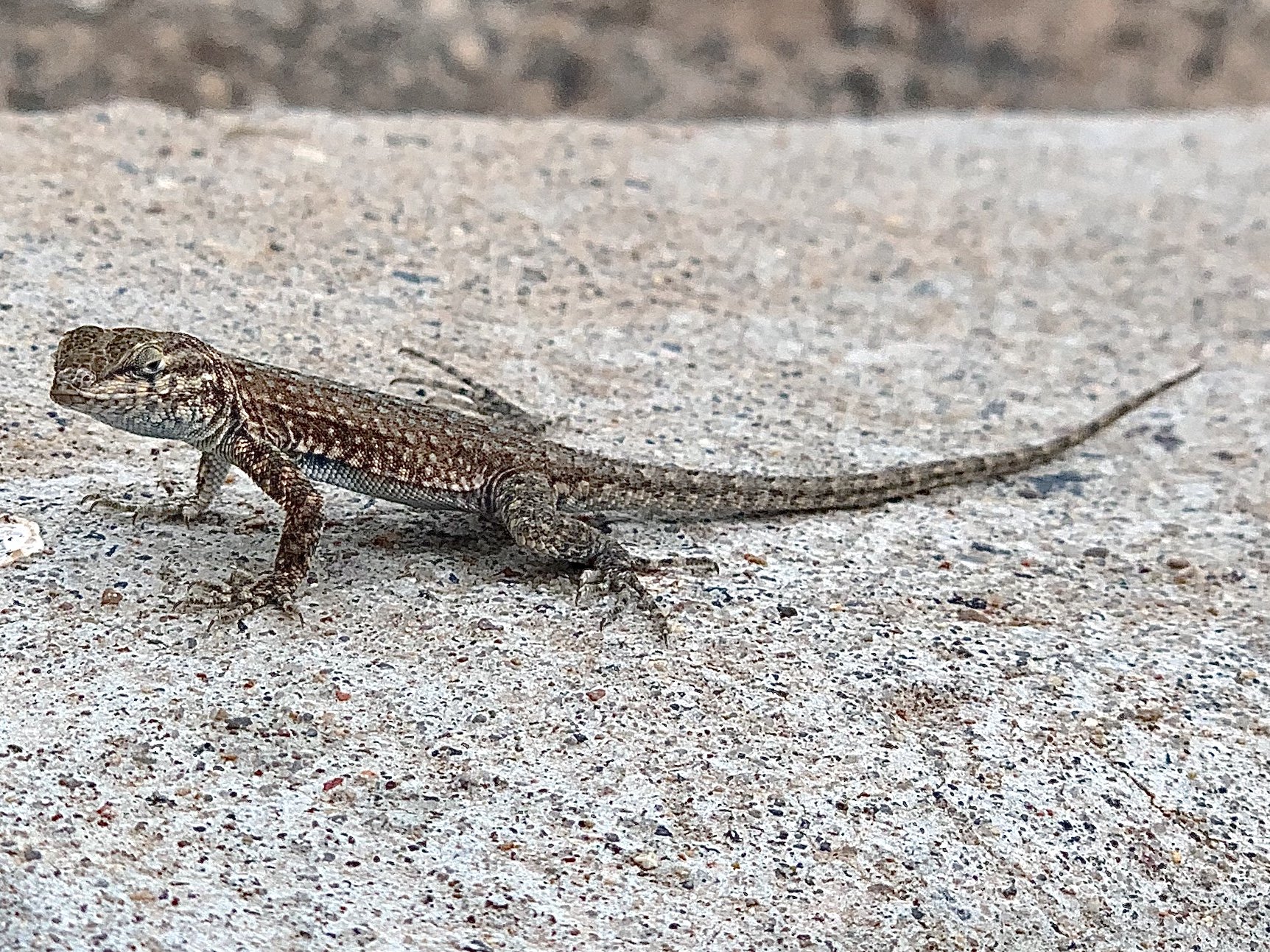 My favorite lizard here at the monument is the large bright green lizard often seen around the ruins and on rocks, particularly near Lomaki Pueblo, is the Collared Lizard. The major distinguishing feature is the double black collar around its neck. Sometimes the Collared Lizard can be seen running on its two long hind legs. Medium-sized lizards, snakes, flowers, leaves, and insects are all a part of the Collared Lizard’s diet. 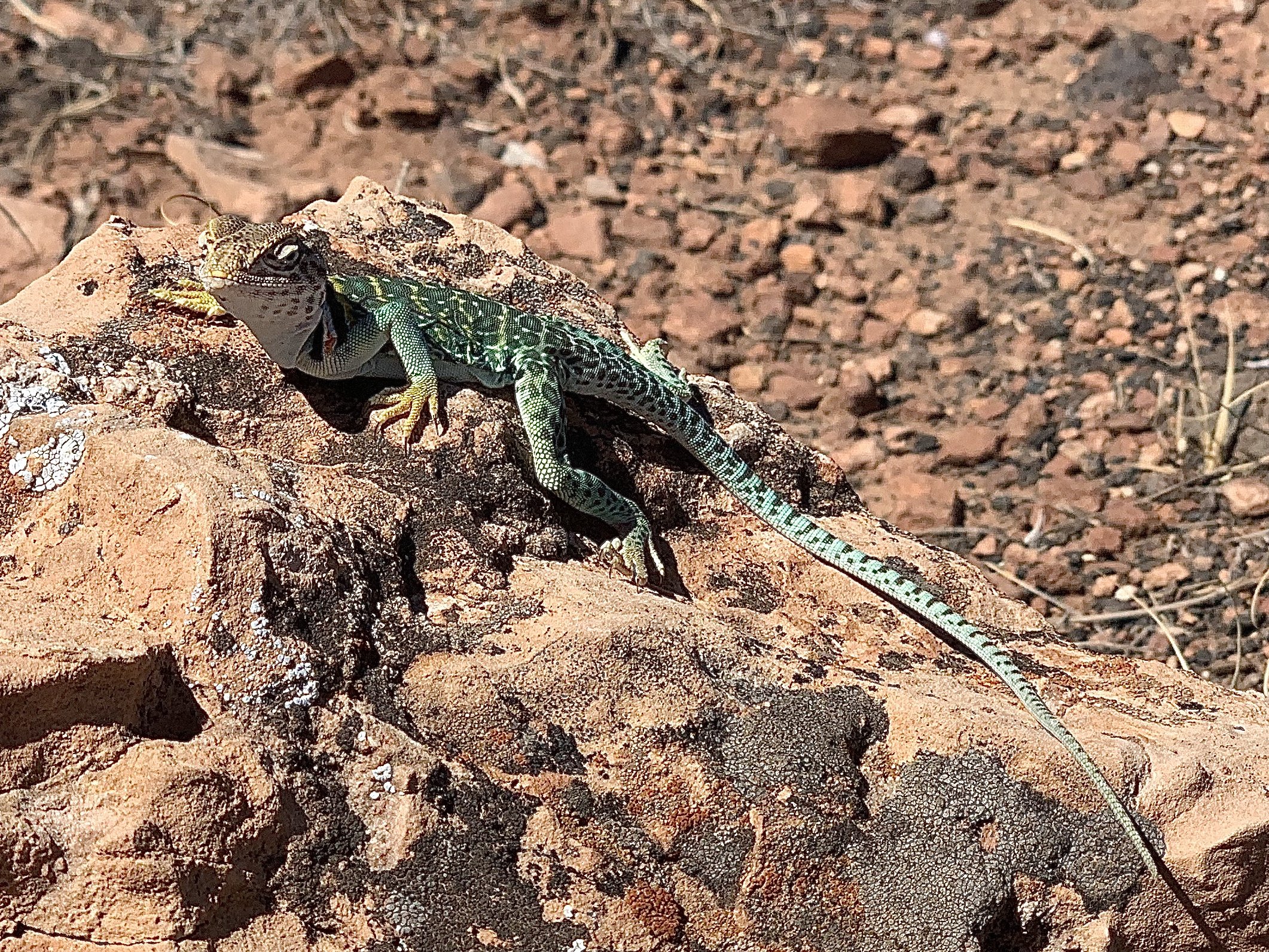 The last lizard I wanted to share is the Desert Spiny Lizard. This lizard has a stout spiny body with a black wedge on each shoulder. It has a tendency to bob up and down when its territory is disturbed. If you were to pet the lizard going from the tail to the head, it would be super painful. 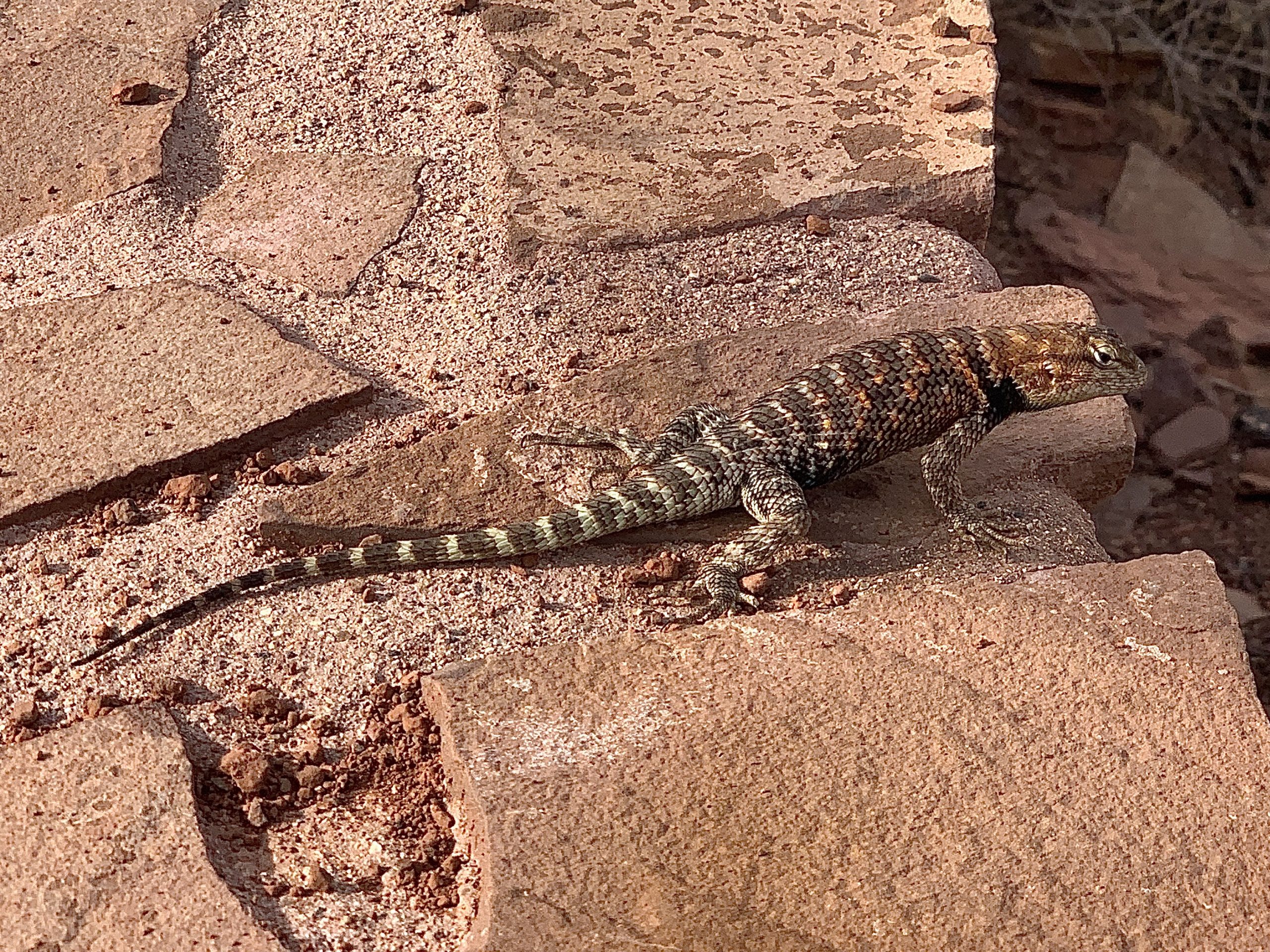 The last animal I want to talk about is a rattlesnake. I actually came across it when I was going to East Mesa a couple of weeks ago, and it was on the side of the road. Sadly, it was dead because it had gotten hit. This is the only time I’ve seen a snake at Wupatki, but I know there are a couple of different holes where snakes live near the Wupatki pueblo. I was still excited to see it because I’ve never had the opportunity to see a rattlesnake up close. 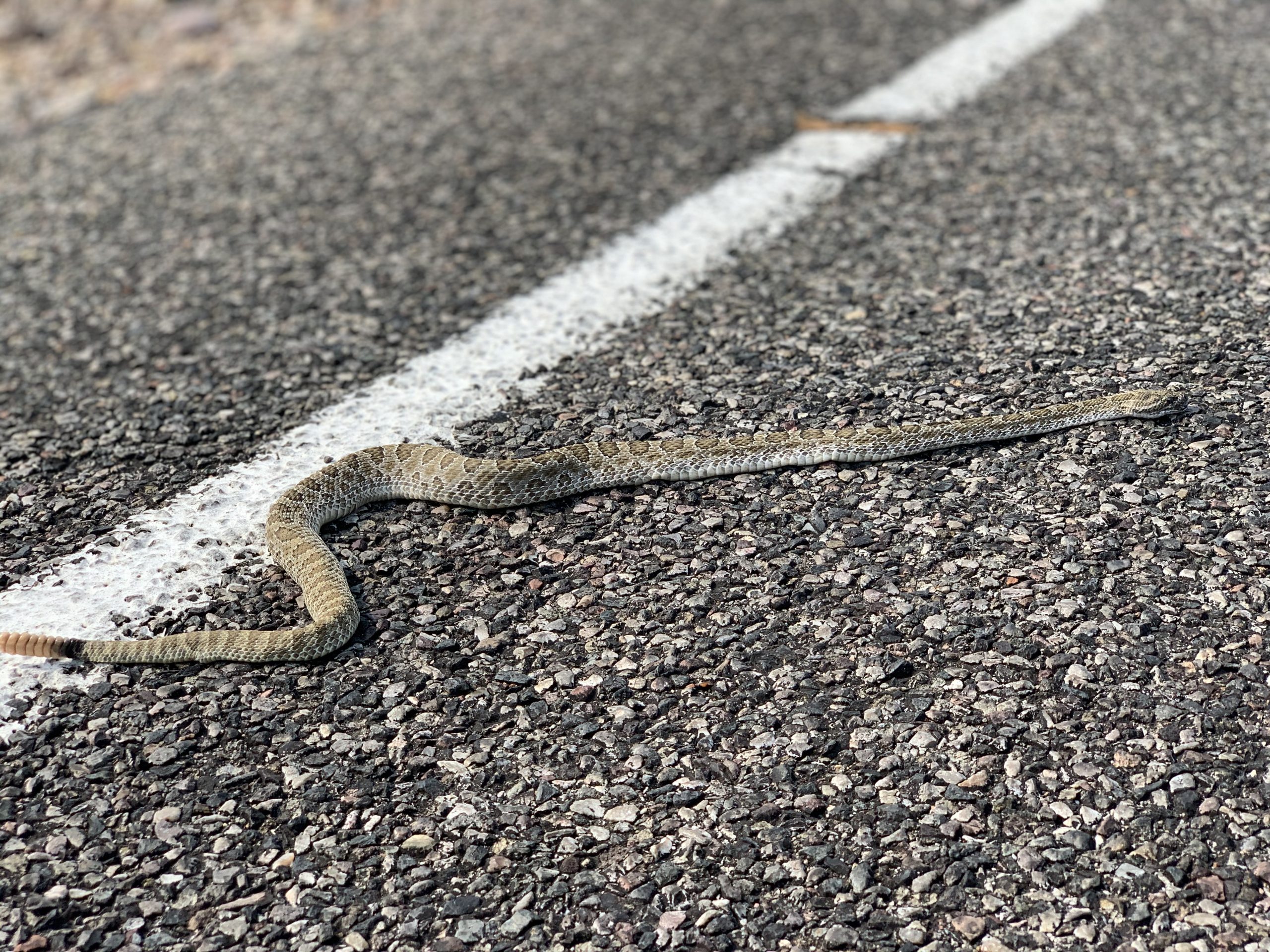 Image of a rattlesnake