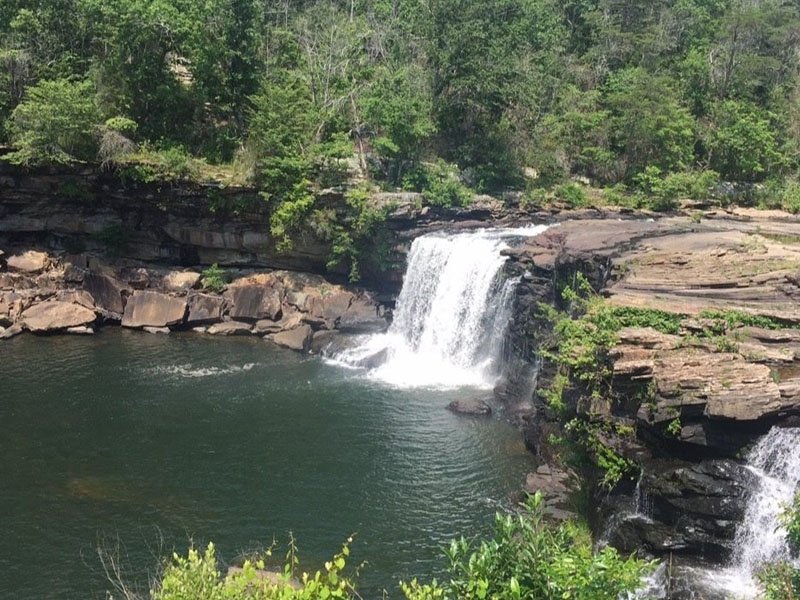 While I am very new at Little River Canyon National Preserve, I have learned so much in the last three days. I feel honored to share this knowledge with any and all of the visitors that come to the park, and with all of you! To begin, lets start with the waterfall in the picture; this waterfall is known as Little River Falls, and while not the biggest in the park it is one of the main attractions that visitors come to see. It is around 45 feet tall and can go from a trickle to Mother Nature’s version of the Hulk with 28,000 cubic feet of water going through it per second. There are two other waterfalls in the park, the least known being Grace Falls which is the tallest in the park at a whopping 133 feet and is located in a secluded part of the park where only a few really get the chance to see it. The next waterfall is known all throughout Alabama, Georgia, Florida, and even on an international scale. That is Little Falls, also known as Martha Falls, and while it may sound similar it is very different than Little River Falls. Now you may ask why it is so famous, and that is because of the swimming hole under Martha Falls known as the Hippie Hole. It’s known by all locals, and has even been on lists for best places to visit while in Alabama and the Southeast.

While some people come just for the waterfalls and the swimming holes, others come just for the wildlife. Little River Canyon National Preserve is home to a variety of animals and plants, including 47 species of fish including trout, 9 types of lizards, 20 species of birds including Wild Turkey, and 10 species of turtles including this cute guy named the Alabama Map Turtle. The park is also home to at least 30 black bears, although the only people to have seen them were students of Auburn University who were conducting a study on black bears. Sadly, the only things I have seen so far are just a couple of lizards scurrying down the sidewalk trying to get away from all the foot traffic, but I do plan on seeing more of these amazing animals soon!

Now while the park may have natural attractions, the nice people who are a part of the Little River Canyon Center take pride in what makes up the Center and all the innovations that help keep the Earth clean. Some of these innovations are recycled glass used to make the counter tops, or the recycled plastic bottles used to create the decks that are behind the Center. But the coolest thing that everyone brags about, including myself, is the system used to heat and cool the entire building. The building uses a geothermic heating and cooling system and has 36 wells that are all 300 feet deep underground, which is kind of scary to think about just a hole 300 feet deep in the ground about as deep as a 30 story building is tall. Because of the innovations used to create the Center, the building was awarded Silver in the Leadership in Energy and Environmental Design (LEED) program. And a fun fact about the Center is that it isn’t on park property but on private property, so somebody has the park center as a tenant which I think is pretty funny and cool. But that isn’t all; visitors can do various activities. A lot of people fish on the river on top of the falls, and I always have my rod and reel ready to go just in case I have time to practice catching and releasing. The park also allows canoeing and extreme kayaking, and Little River Falls can go from a level 4 to a level 6 depending on the rain. But the park also takes initiative by creating activities. One example occurred this past weekend we had free fishing day where anyone could go fishing without a license, and to help promote that we had instructors showing how to cast a fly fishing rod and how to create and tie their own little flies. Afterwards an instructor would take them out to try it out; everyone was so patient and easy to talk to. There are many other classes such as art, birdwatching and even blacksmithing, so I do hope to witness all that I can and learn everything there is to learn about this beautiful place!