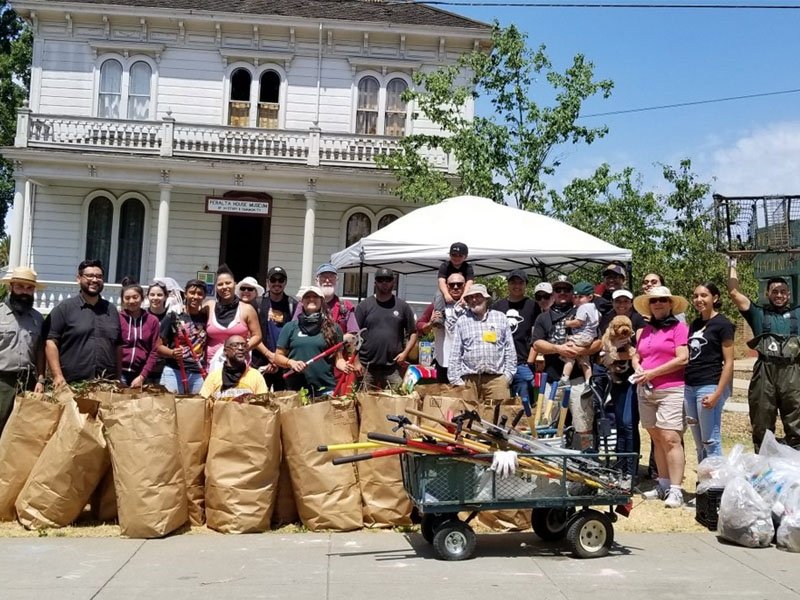 Posted at 19:17h in Blog by Ximena Cuervo 0 Comments
0 Likes

For Latino Conservation Week, the Juan Bautista de Anza National Historic Trail LHIP interns collaborated in the planning of the Peralta Hacienda Restoration Service Learning Project, for which our mission was to bring together local residents of Oakland to help clean up and remove invasive species on the Peralta Creek.

The purpose of this service learning project was to not only help restore the creak health by increasing native habitat and creek flow by removing aquatic hemlock and watercress as well as garbage, but to bring the local Latino community together to share in environmental education and appreciation.

The Anza Trail staff formed a community relationship with the Peralta Hacienda Community Center, as its ancestors were part of the Juan Bautista de Anza Expedition. We reached out to programming staff to discuss ways we could offer a community service/conservation project on site for Latino Conservation Week. The Peralta Hacienda staff introduced the idea about restoration on the creek that was currently being worked on. We jumped on board with the idea because we immediately related water to the Anza Expedition, as water was key to the success of the journey. It provided a chance to connect the Anza story with the creek, apart from the connection it already had to the Peralta Hacienda. We were directed to Humberto Bracho and Miguel Lopez, members of the Center who were experienced with the project. We learned that the Peralta Creek is a highly impacted creek due to the frequent use of the site. Trash and illegal dumping seems to be a constant challenge for the creek as well. We reached out to community member and creek/watershed expert, Christopher Richard, to participate in leading the event. We developed a project plan with them, and began promoting the event with flyers and social media, both in English and Spanish. These were passed out in the Center as well as at the local church nearby. Additionally, we reached out to Environment for the Americas for funding. We were granted funds for food and refreshments, as we already had tools on site.

The day of our Creek Clean-up, the Anza staff arrived at 9:00 am to set up. We set up a canopy with three tables under it, and placed refreshments (orange juice, water, coffee, grapes, oranges, apples, and donuts) on one table, a sign-in section on another table, and an Anza Expedition information section on the other. Leading the creek restoration was Christopher Richard, a local expert on creek and watershed function and mapping. He volunteered to give an educational discussion to our volunteers about the creek. Additionally, we had a Peralta Hacienda intern, 19 year old Allen, guide the group through the creek, as he had previously been in charge of cleanups and restoration of the creek in other projects. We gathered everyone together and introduced ourselves, our mission, and the educational portion of the project.

We then decided to split our volunteers into three groups, each working simultaneously to restore the vitality of the Peralta Hacienda land. We had 10 volunteers go down to the creek to removed debris, as well as four types of invasive species, including ivy, water parsley, grass, and watercress. Once at the creek, the leaders pointed out the invasive plants and all were shown how to remove them. The volunteers used the shears, shovels, and hoes to cut and pull out weeds and the invasive plants. We used special paper recycling bags that were about four feet tall, meant to collect the unwanted plants. Later, these bags were placed in front of the yard for the City of Oakland to collect. The other group, of about 10 volunteers, was given the task to pick up trash and garbage around the fields of the Center, as well as around the creek. They used the trash grabber tools and placed the trash in plastic recycling bags. These bags were also placed in the front yard for collection. The last group was placed in the back garden to help shovel dirt into a large bin. This role was significant for the Peralta Hacienda garden.

After about 1.5 hours of work, we gathered the 25-30 volunteers together. People had the chance to cool down and eat refreshments and pizza. They mingled and debriefed about the project. We held our closing remarks and took a group picture to finalize the event. As I walked around the different groups, I noticed people were enjoying their time being in community and the outside world. The men that volunteered to shovel the dirt were chatting and telling stories. Additionally, the folks in the creek had a good time struggling with the pesky plants and figuring out how to pull the weeds that were deeply rooted. With summer sunshine, pizza, kids, dogs, tools, and fresh air, people seemed to enjoy the successful event and were proud to lend a hand to help clean up their community.