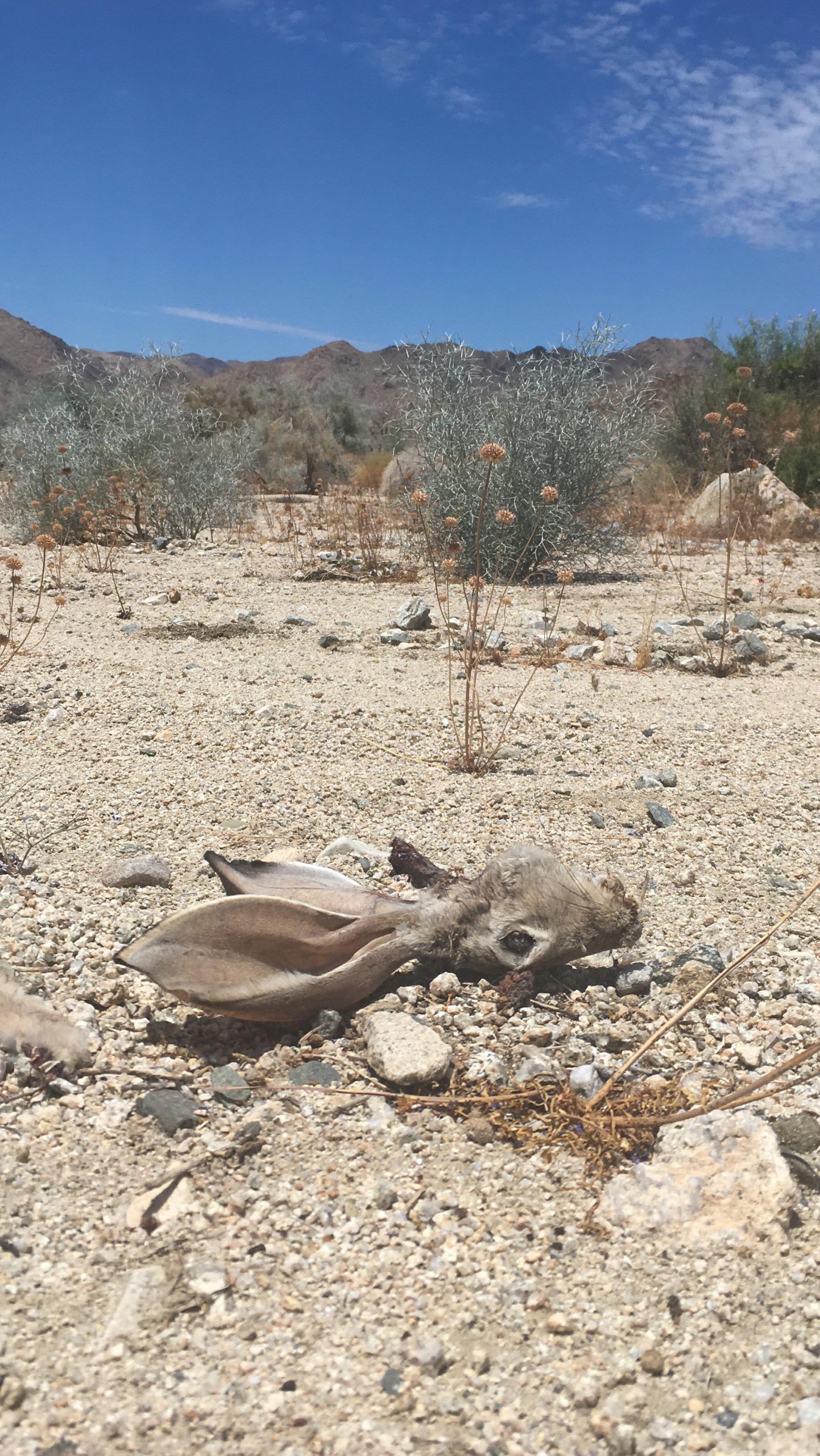 01 Aug Last Day in The Field

Yesterday was my last field day at Joshua Tree National Park and it did not disappoint! I spent about seven hours in the park and each hour was different than the one before it.

Early in the morning I took off with a JOTR Wildlife Technician, Kristen Lalumiere, to meet with two Archeological Technicians. Already, the day seemed promising. I love getting involved with work from the other branches and I especially love seeing park staff out in the field doing what they do best. The Arch Techs, during a survey, found some roosting bats and we came along to take some data on them. The bats, miraculously to me, were roosting in a flake – a very skinny tight crevice- on the face of a boulder. Bats have largely been recorded in abandoned mines and very rarely have been found out in Joshua Tree Rock Piles. Kristen identified them to be Mexican Free Tail Bats; this is the first time this species has ever been officially recorded in the park!

After a lot of excitement and pictures I had to be on my way to complete my tasks for the day. Casually, before we leave we see a pair of coyotes sauntering off into the desert. I set off on my own into the Pinto Basin, a huge stretch of untouched desert and the least popular place in the park due to its scorching temperatures. But hey, I had a smile on my face, AC blasting, and amazing views to keep me company. I tracked my last desert tortoise Sawahkit, named by a group of tribal workers and means ‘tortoise’ in their indigenous language. Sawahkit is my favorite. This tortoise has somehow descended a canyon and then ascended to the other side of the canyon, climbed a ridge, and sat down under some rocks. It blows my mind every time I track him. I always shake my head while I struggle to climb out of this canyon,  astonished that this tortoise must’ve been a better rock climber than me.

For the rest of the day, I traverse the entire southern end of the park checking and maintaining pitfall traps that were installed in the 90’s. Pitfall traps are an assortment of buckets buried beneath the ground. There is fencing running in between each bucket so when an animal runs into the fencing they are basically corralled to have to run by the bucket to get past the fence. They fall into the bucket, unable to get out. Sounds cruel, but worry not! The lids are taken off the buckets at dusk and checked immediately at dawn to prevent any fatalities or injuries. The park has been using this data to assess  mammal biodiversity (rodents) and some reptile biodiversity as part of an ongoing project recording the effects of climate change in different parts of the park. My most memorable check was at the southernmost pitfall trap. To get to it I had to cross a gigantic wash, there must’ve been a lot of water running through this area a long time ago so it’s very flat and the sand is compact. As I’m walking across I noticed a pair of ears on the ground. Have you ever seen a jackrabbit? If you have, you know that they have an unmistakably large pair of ears. They actually use their large ears as a way to stay cool – they radiate off any excess heat from them! These ears  were laying on the ground next to me and I followed them up to a head – and nothing else. If you’re squeamish, stop reading. Something had eaten the rest of the rabbit and left just the head behind! Either that or I interrupted whatever was about to eat the head and I was not about to stick around and find out so after a quick picture I hightailed out of there!

Not bad for a day in the desert.