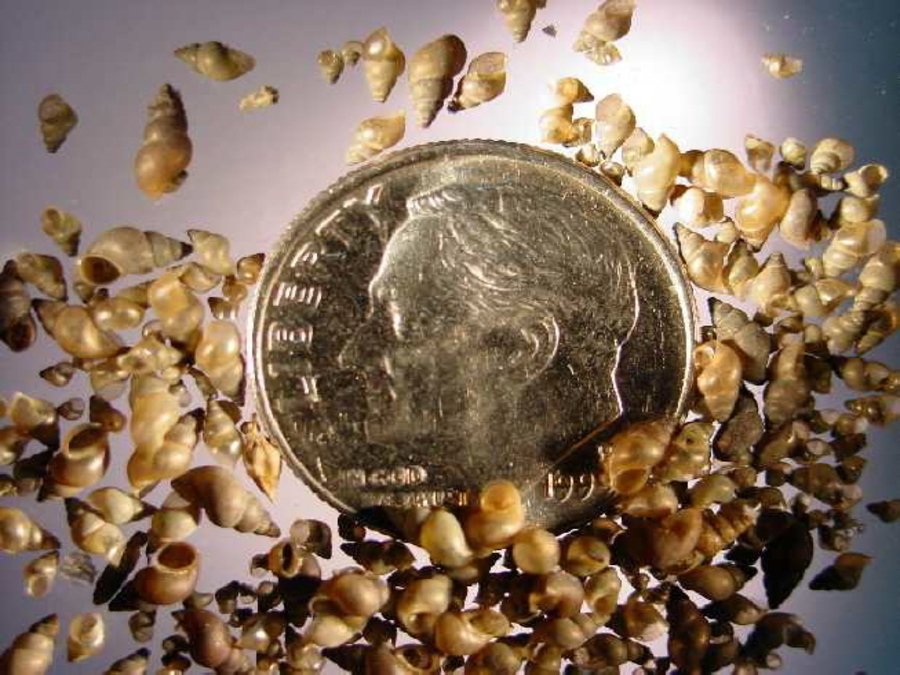 Spend a day in the field with an endangered coho salmon monitoring team at Point Reyes and you’ll meet a group of people motivated by a love for nature, for whom trudging through a cold river and lugging around equipment only to get their hands covered in fish slime is nothing short of a privilege.

The fish are met with adjectives like beautiful and adorable, and even a sighting of a slug might be enough cause for an aww. It might be surprising, then, to watch this team of shameless nature lovers catch an impressive 8-year-old signal crayfish and, without a moment’s hesitation, crush it beneath their feet with an audible crunch.

What could motivate a career naturalist to kill an animal so impulsively? When asked, only a two-word explanation was needed: “It’s invasive.”

The crunchable signal crayfish aren’t the only invasive species populating the streams and estuaries where coho salmon struggle to survive. They are also threatened by a most unlikely foe: New Zealand mudsnails. In contrast with the large crayfish with their intimidating claws, these tiny snails are just a few millimeters long and mostly inconspicuous (see the picture at the top of this post). It’s hard to imagine such harmless little creatures being a serious invasive threat, but these snails can grow to incredible densities by outcompeting the native snails and insect larvae that make up the diet of a juvenile salmon. Even in the unlikely event that a coho does try to eat one of these invasive snails, its thick protective casing will prevent digestion and it will pass through the salmon unharmed. With coho bereft of their native prey and unable to consume the mudsnails, these tiny snails will effectively break a link in the food chain and further endanger a species already on the brink.

However, invasion itself is not necessarily a harmful thing. A species dispersing to new territory and competing with the species already established there is a fundamental ecological process. This is how every species, from mushrooms to humans, expands its range. The ensuing competition is a key driver of natural selection – the species that can’t adapt die out, and life goes on. So why make a fuss about invasive species? Why crush the crayfish?

The above argument makes sense for natural dispersal, but most invasive species are hardly natural – the signal crayfish, New Zealand mudsnail, lionfish, kudzu, cane toad, mongoose, and just about any other invasive species you hear about were introduced and spread by human activity. Somebody with an ecocentric mindset (see my previous post for more detail on ecocentrism and anthropocentrism) might crush the crayfish for exactly that reason – these species are unnatural invaders that are destabilizing the ecosystems they have established in. The difference between an endangered species like the coho and an invasive one like the mud snail is akin to the difference between an artist’s brush stroke and an accidental coffee stain on a painting; one has value and is to be preserved, and the other does not and is to be removed.

By contrast, somebody with an anthropocentric mindset would examine the impact of these invaders on the ecosystem services in invaded areas before crushing the crayfish. Invasive lionfish, for example, pose massive threats to Caribbean islands whose major industries are fishing and tourism by reducing populations of native fish by as much as 80% and discouraging tourism to these depopulated reefs. That economic impact is strong anthropocentric justification for their eradication.

However, the ecocentric and anthropocentric points of view do not always align. The same signal crayfish that is invasive here at Point Reyes was also introduced in Finland, where crayfish are consumed for food. Signal crayfish are now the dominant species in Finland and have invaded much of the rest of Europe. They are the centerpiece of a fishery worth more than 6 million euros and a Finnish culinary tradition. From an ecocentric point of view, this species is invasive and damaging the ecosystem, but from an anthropocentric point of view, it is providing valuable economic and cultural ecosystem services. How to balance these views is an open question, and one not likely to be answered over the course of one intern’s blog post.

There is no one-size-fits-all answer to the problem of invasive species. In many cases, by the time a species has been identified as invasive and problematic, it may be too late to eradicate it. Efforts on the New Zealand mudsnail, for example, do not focus on the unrealistic goal of completely removing these animals, but rather on outreach and education to let the public know that the snails are present and to thoroughly clean any clothes, gear, and boats that have been in infested waters before dipping them into another river.

A variety of methods have been used to control invasive species, with costs and efficacy varying from species to species, but ultimately the only surefire way to deal with invasive species is to prevent people from spreading them in the first place. A group of naturalists crushing a crayfish or rigorously decontaminating their wetsuits after swimming through a mudsnail-infested estuary isn’t going to make these invaders go away, but if everybody treated invasive species with this same gravity, perhaps they would never have been able to invade in the first place.