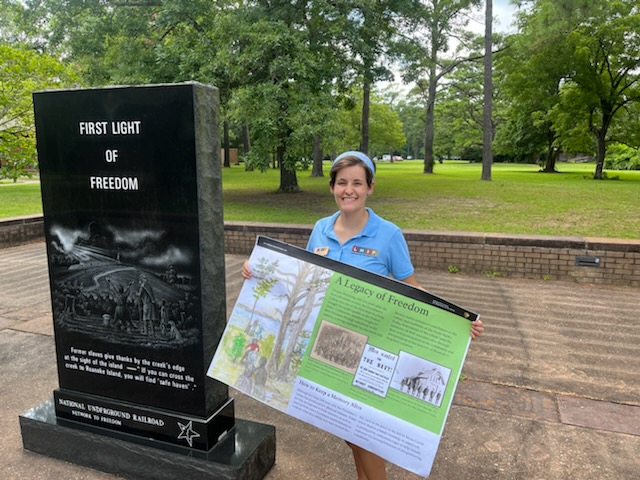 25 Jul Interpreting the Forgotten Past 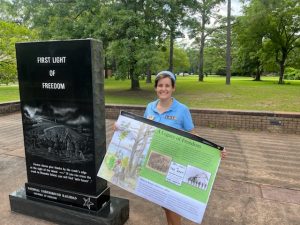 Located in the heart of North Carolina’s Outer Banks, Fort Raleigh National Historic Site is responsible for interpreting a wide variety of history, most notably the story of the English Lost Colony of Roanoke. However, this is not where the history of the site ends, and less than 300 years later the island was once again home to a community of pioneering colonists. During my internship, I contributed to the park’s interpretation of the Roanoke Freedmen’s Colony– a piece of Civil War history often overlooked by visitors. Although not as well-known as the English colony, these freed men and women made a significant impact on the cultural and historical landscape of the Outer Banks, and it was my job to help highlight this inspiring narrative.

While my previous posts have detailed the efforts made to engage guests in the history of the site, another aspect of my project is to design two wayside panels on the Roanoke Island Freedmen’s Colony. These 3′ x 2′ displays will be placed outside in the park’s plaza by the First Light of Freedom monument. While my confidence with graphic design was decent when I first arrived, it was not something I regularly did, so the project was both practice and a learning experience. I was given a brief tutorial of how to use Adobe InDesign by the head of interpretation for Wright Brothers NM and Fort Raleigh NHS, and relied on YouTube videos to assist me through any other challenges. 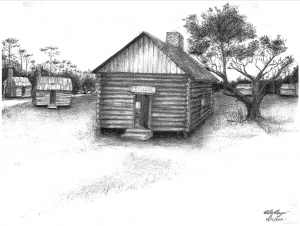 Because the Freedmen’s Colony did not produce visual sources, designing two visually appealing panels was quite the challenge. My month of research helped me easily transcribe information on the history of the colony, but finding high quality and relevant images proved difficult (at first). When I initially began planning for my panels, I wanted the first to highlight the colony itself, while the second discussed the legacies they left behind. The first one was finished relatively quickly, but panel number two needed help. It is common to use a large image to draw attention to a wayside panel, so I utilized a sketch of a Freedmen’s school by NPS/Molly Mays as the subject of the first one. However, the second panel was still in need of eye-catching art and because of the lack of high quality visuals, I had to rethink the theme of the second panel. 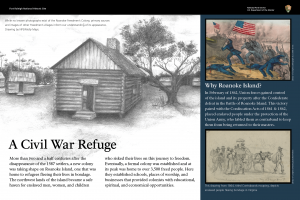 Mona Currie, one of our volunteers who is passionate about the Freedmen’s Colony, has made several water color art pieces depicting colony life and faces. Because it is not in the style of art normally featured on national park signage, I initially did not consider it for use. However, as I continued my work I realized that I wanted display her artwork not only to help visually represent the colony, but also to solidify the theme of the second panel. While I wanted to focus on the legacy of the colony and it’s residents, the folk art style of Mona’s art allowed me to further educate visitors on the lack of sources we have for the community. I used it to explain that despite being younger than the Roanoke lost colony, the Freedmen’s colony has produced few visual sources. Because of this, we rely heavily on passionate historians and enthusiasts to help visually represent this often forgotten history. 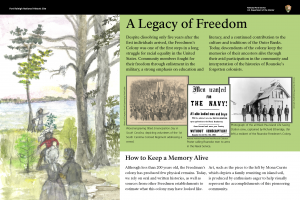