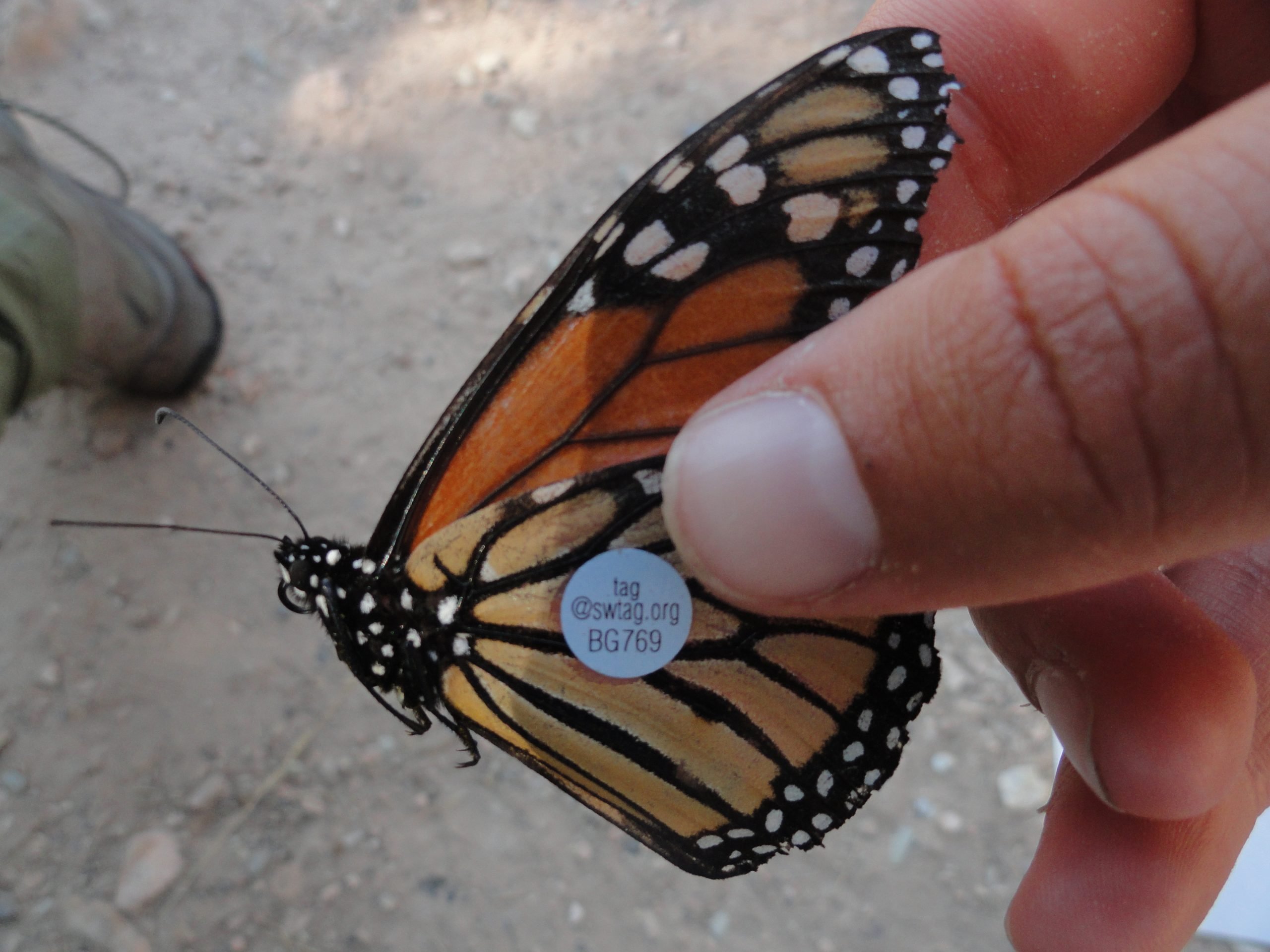 I recently administered a monarch butterfly school field trip at Dinosaur for middle school students from nearby Vernal, Utah. On the day of the field trip, I arrived with colleagues to the Josie’s Cabin area a little before 7:30. On this early morning, the goal was for our team to catch as many monarchs as we could before the student’ arrival at 9:00. Then, we could start their field trip by tagging a batch of butterflies with them. The entire morning as I was trudging through the meadow looking for butterflies, I was quite terrified that the students would get there and we wouldn’t have anything to show them.

Luckily though, we caught 7 monarchs and had them ready to go for the students when they got off their bus at Josie’s. I caught 2 of the monarchs – one which was groggily flying near the ground and another who I had to take off running through a field and leap and swing into a tree to catch. Though this effort left me sweating and out of breath just before the students arrived, it was definitely one of my better catches and I was glad to have one more butterfly to show the students.

When tagging the monarchs, the students helped me by taking notes, evaluating the genders and body conditions of the monarchs, applying the identification tags, taking the swabs of monarchs’ abdomens to sample for parasites, photographing tagged butterflies, and, finally, releasing them. Most of the students were willing to hold the monarchs for me or otherwise participate in the tagging process. All of them seemed pretty excited to be tagging monarchs and many asked questions. I was excited to hear at the end of the day that several of them were interested in tagging again. One students even asked me where she could get her own tags. I was glad to hear that I had cultivated some potential citizen scientists.

Later on during the trip, students went on a habitat hike in the area. There, they observed nectar plants and pollinator species. They also surveyed the milkweed along the hiking trail for monarch eggs /caterpillars and they even caught and tagged 2 more adult monarchs. (Pictured is one of the monarchs caught by a student). Unfortunately, they did not find any monarch eggs and caterpillars. However, they did learn what milkweed is and going forward they’ll be able to continue being citizen scientists and checking milkweed for monarchs.

I’m thankful for one of the interpretive rangers at Dinosaur who helped me plan for the trip. Her advice proved crucial, as I was originally planning to give a 30 minute lecture of sorts to the students about all things monarchs. She helped me realize that there was little chance 20 middle school students could sit for 30 minutes and listen when they were out on a field trip. So instead, I broke up my talking points and spoke about the monarchs throughout the day, not all at once. I did my best during my discussions, and my only major slip-up was mentioning birds and bees consecutively while discussing different types of pollinators. That caused a couple giggles and was probably immensely distracting to the middle school group. In the end though, I do think some of the information probably resonated with the students and it was a memorable day for them. My hope is that in the future they will look around for monarchs and enter their observations to one of the citizen science sites I provided to their teacher.

In other citizen science news, coming into the office one day last week, I looked at my phone and received a Snapchat from my dear college friend Nicole. She has been telling me this summer that every time she sees a butterfly, she thinks of me. I opened her message this day and saw a close up video of a monarch nectaring on a potted flower. The video was captioned with just “!!!”

I kind of freaked out when I got the video. I immediately responded “OMG” with a lot of exclamation points and asked for a copy of the video. As I have freely admitted at this point, I am a monarch nerd. A monarch sighting by a friend calls for a lot of excitement. So, I requested to talk to Nicole about the sighting. Later that night, I explained that from her picture we could tell it was a definitely a male monarch. Nicole said she gets monarchs at that plant at her home in New Jersey every year, and she shared with me the video and several more pictures. Soon enough, I had directed her to a citizen science site and she had logged her sighting on Journey North. With that, she officially became a monarch citizen scientist. Hopefully, it’s the first of many sighting and entries to come for Nicole and the first of many friends that I’ll convert to monarch citizen scientists, or maybe even monarch nerds.