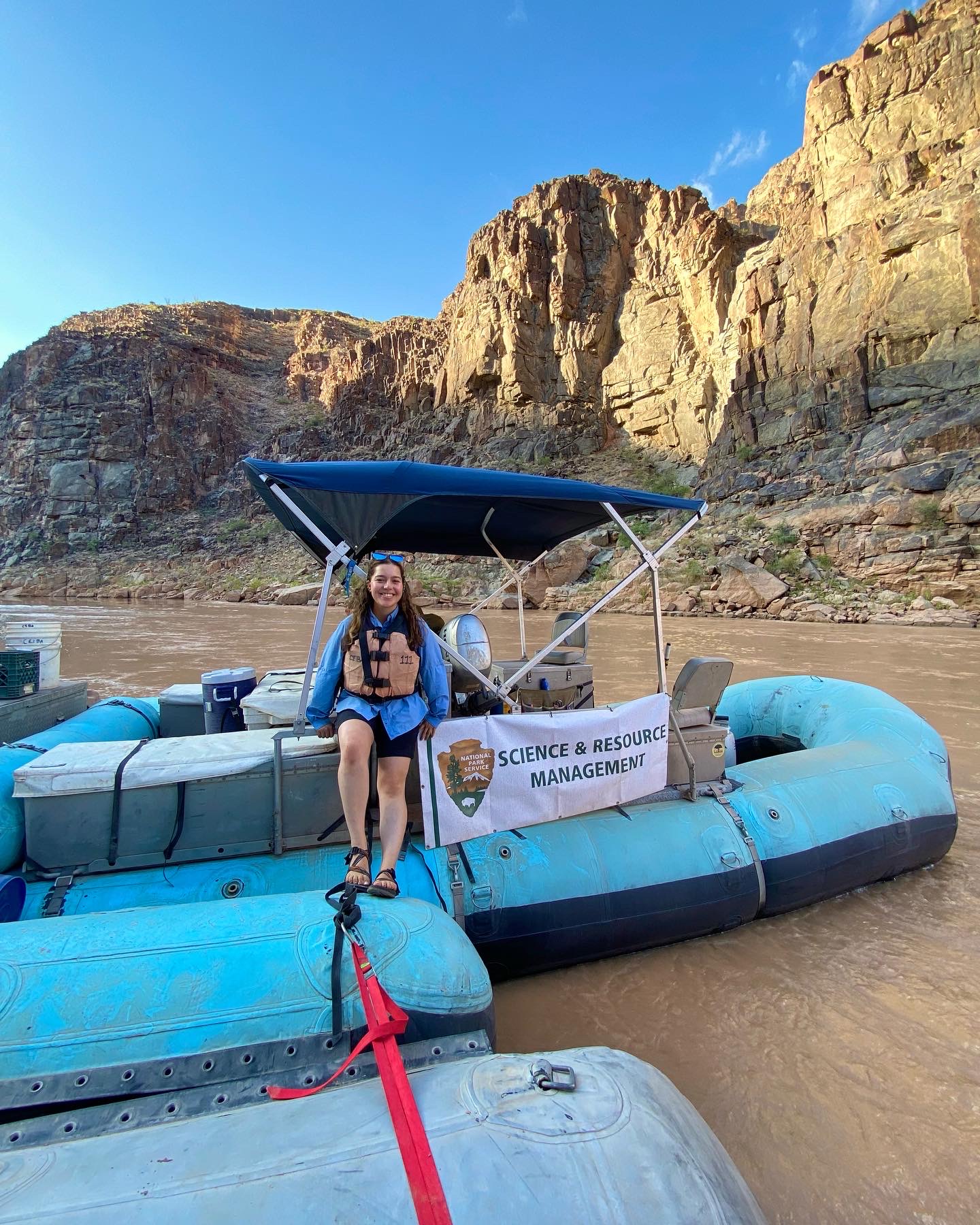 20 Oct I Survived The Colorado River

As the title says, that’s exactly what I did. Well the title makes it sound like extremely dangerous and I want to preface by saying, yes, anytime something like rafting a river can be very dangerous. However, I was very well taken care of and in good hands with our boat operators so it was not that scary. Now where do I begin about my trip. I guess the beginning is always a good place to start.

This was me at 3 mile rest stop, when hiking down the Bright Angel trailhead toward Phantom Ranch. 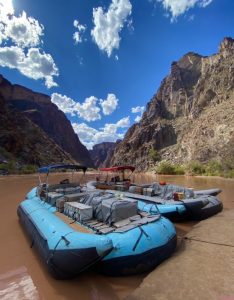 These were the rafts called “S” rigs that we used for this river mission.

This river trip was a mission to preserve cultural sites, remove invasive plants, and control encroachment mitigation at campsites in the canyon. It was a 16 day trip with 2 motorized “S” rigs, there would be 2 boat operators, 1 swamper, 4 ALCC members and 4 park service employees on the trip. Since the 16 day trip was so long and there are more than 4 people within our vegetation program, we were doing a split/exchange between the park service employees. The trip would be split in half between the upper half and the lower half of the river, the upper being 6 days and the lower being 10 days. Maybe you are wondering why the split was so uneven? Well there are only so many places where an exchange can happen, you can either do an exchange at Phantom Ranch or Diamond Creek. Phantom Ranch is the easiest to make a switch because it’s within Grand Canyon. To make the switch there, one group needs to hike into the canyon and the other group needs to hike out of the canyon. It is more difficult for an exchange at Diamond Creek, because once you get down a certain point in the canyon, one side becomes Hualapai Nation and Diamond Creek is on the Hualapai reservation. You can make an exchange there, however, you need to secure a permit as well as that it where a lot of the commercial river trips take out, so it can be very busy. For this exchange, we switched at Phantom Ranch and used the Bright Angel Trail which was 7.5 miles. I made the choice of going on the lower half so I could hike into the canyon instead of out, I hike a good amount but this was a whole new experience and I was looking out for my safety. I knew during the heat pushing myself to hike out of the canyon was something I was not ready for. However, the hike in was incredible. The views were spectacular and I enjoyed every moment. I didn’t realize my calves would kill me and be on fire for the next 4 days though. Hiking on the trail, we ran into our upper half crew and chatted for a few minutes to get the inside scoop of how the upper half of the trip went. We finally made it to the boats, and right next to Phantom Ranch is Horn Creek Rapid which is a pretty big rapid. It is a rated a class 8 out of 10, so for that to be my first rapid I was a little nervous, but I put my faith in the boat operators and we made it through safely. One thing to note about the lower half of the trip is that it is longer, more hot, and the rapids are a lot bigger. They each get rated on class scale of 1-10 on river difficulty. You may be thinking did I go raft any 10s? I did go on 2 class rated level 10s, Lava Falls and Crystal Rapid. We made through both of them safely, and one of our boat operators even gave us all cat ears to wear through Lava Falls.  A normal day on the river started with a coffee call at 5:30 AM and when we got coffee we were expected to pack up all of our things like our dry bags, cots, and sleeping bags in time for when breakfast would be called at 6:30 AM. After breakfast, we would create a fire line and help load all of things on the boats to hopefully launch by 7:30 AM or 8. Then we would travel to our next work site, working on invasives and encroachment mitigation. Either manually or with applying herbicide, and sometimes we would camp at our worksites. We would go through rapids and be in the sun a lot of the days working. We would typically end the day at around 4-5 looking for a campsite and then we would have the rest of the day to relax after setting up our cots, and having dinner. 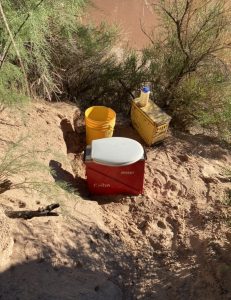 So this is what the bathroom looked like. Yellow pee bucket, and the groover for your #2.

Now some of you maybe curious about the bathroom situation on the river, well, let me tell you I was the exact same way. I think besides the rapids/sleeping situation, my biggest worry was how the bathroom etiquette was on the river. Let me tell you I pretty much psyched myself out and it honestly wasn’t that bad. So river rules are pretty much that all pee goes into the river, and all the crap we have to hike out. So it went like this, we had a bright yellow bucket with the word pee written on it, and then for the crap it was an ammo can with a toliet seat on top known as the “groover”. There was also another ammo can there with toliet paper and dried bleach, well you can imagine what the bleach was for. The groover locations would be in spots that have been designated for the bathroom on many previous river trips, it’s river etiquette to kind of know where the locations are because they are the ones secluded and farthest from the kitchen and camp areas. The groover was sometimes secluded from the camp, but you had a wide open view of the river. I guess you would have to time it right and hope there weren’t any other trips coming down the river when you were leaving your offering. If I am being honest, I never really thought that I would be pooping into an ammo can while admiring the Colorado river and canyon walls. I guess there really is a first for everything. 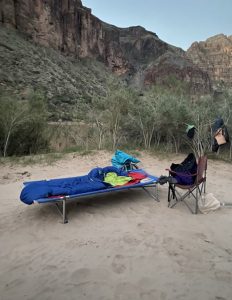 This was my set up, of how I slept every night.

I also want to mention, a new thing for me was cowboy camping. I grew up camping in trailers and tents, but I have never just set up a cot or a sleeping pad on the ground without protection. I was nervous about the sleeping situation a bit because a few weeks prior some of the wildlife crew had tested a few bats in the canyon and they came back positive for rabies. I assumed everyone would be sleeping in tents, and that was not the case. Everyone wanted to cowboy camp. Let me specify that I was not peer pressured into cowboy camping, everything was my decision.  I ultimately decided I was going to cowboy camp as well, and I ended up cowboy camping all 9 days. It was a sight to sleep under the stars and canyon walls, beauty like that is only dreamed about. There were lots of mosquitos, and even sometimes I woke up to animal tracks around my cot like mice and a ring tailed cat. I liked it better knowing I was sleeping when they were there, because if I was awake, I would probably be freaked out. I lucked out in not getting stung by a scorpion or bit by anything other than mosquitos. Everyone kept telling me it was inevitable to either get bit or stung by something and I’m just glad all I got were mosquito bites. I also didn’t mind being off the grid for 9 days, having no cell reception was pretty fun. 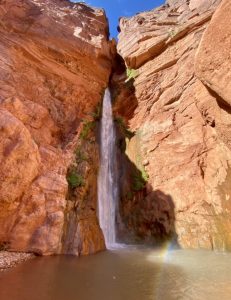 Lastly, I had the amazing opportunity to see four waterfalls on the lower half of the trip and everyone was as breathtaking as the last. I can’t even put into words how beautiful the whole trip was. But the waterfalls for sure were an added bonus, especially since it was the only clear water we had been able to get since the Colorado River was red with sediment. I could go on and on about my trip but for now, I will just say that I had the most amazing experience and I am so grateful to LHIP and my supervisor Lonnie for allowing me to have this opportunity.

Well until next time,

Colorado River, Into The Canyon