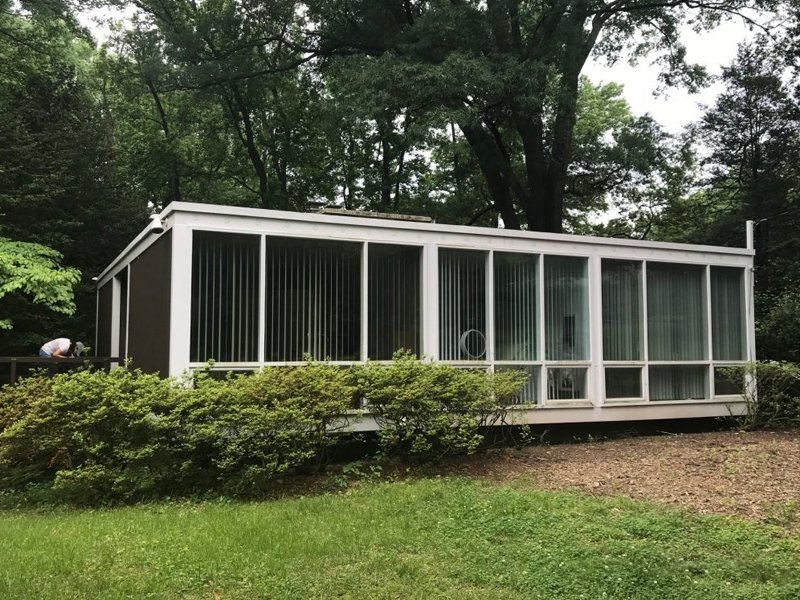 Posted at 00:28h in Blog by Emelyn Najera 0 Comments
0 Likes

Founded in the 1930s as part of FDR’s New Deal projects, the Historic American Building Survey (HABS) has produced a vast and varied archive of the nation’s historic architecture.  Composed of measured drawings, large-format black and white photography, and historic reports,

for decades HABS documentation has reduced the loss of our architectural heritage by producing long-lasting records made accessible to both professionals and the public. As an intern architect with HABS, I had the opportunity to work as a team with fellow intern, Taurean Merriweather (from the University of Florida), and our fearless leader, HABS architect, Robert Arzola. Throughout the summer we worked on producing architectural drawings for two houses in the area: the first, a mid-century modern residence in the Hollin Hills neighborhood of Virginia, and the second a traditional nineteenth-century Washington rowhouse. The two houses could not have been more different, and consequently provided valuable lessons when it came to their documentation.

The first of our two projects, which we subsequently referred to as “Hollin Hills Unit House No. 5B” (what a name!)  is located well within the lusciously green and woodsy Hollin Hills community. Designed by architect Charles M. Goodman, the neighborhood features a variety of mid-century modern homes, whose simple geometry is juxtaposed by the unconstrained environment of the surrounding forests.  Curiously, there’s no physical separation between the properties, trees and vegetation flow from one property to the next, not a single fence in sight.  Meanwhile nature has also infiltrated the houses’ construction as over the years many a gravel roof has sprouted tufts of vegetation creating lovely, albeit incidental, “green roofs”. Unit House No. 5b can be described as spacious rectangular plan, almost a perfect square. A central core consisting of: kitchen, bathrooms, a utility closet, and a fireplace, provides separation between the three bedrooms and the residence’s living space.  The expansive windows along the bedrooms and living room, allow clear and uninhibited views to the lush vegetation outside and allow natural light to permeate the interiors. Similarly, the raised roof at the center of the plan creates a skylight that illuminates the hallway and bathroom space.

The first day at the site included a brief introduction to the home, its inhabitants, and its relationship to the rest of site. We learned that the homeowner, Virginia (very kind and hospitable) was amongst the first residences of Hollin Hills, her father had purchased the property prior to its construction in 1954 and had influenced part of its final design. When it came to developing documentation for Unit House No. 5b, the structure’s clean mid-century lines and perfect right-angles facilitated the process of learning the skills to accurately measure a historic structure. With clipboards and pencils in hand, my team and I began the process of documentation by creating detailed floor plans of every space in the house. We proceeded to work together to measure and annotate our sketches, as they would be necessary to draft the project’s final drawings. For exterior measurements that were beyond the scope of a simple tape measure, we had to call for reinforcements. HAER (Historic American Engineering Record) architect Dana Lockett assisted our team by teaching us how to use Leica laser scanning equipment. Having had relatively little experience working on the field, Hollin Hills provided an excellent opportunity to learn some much needed skills!