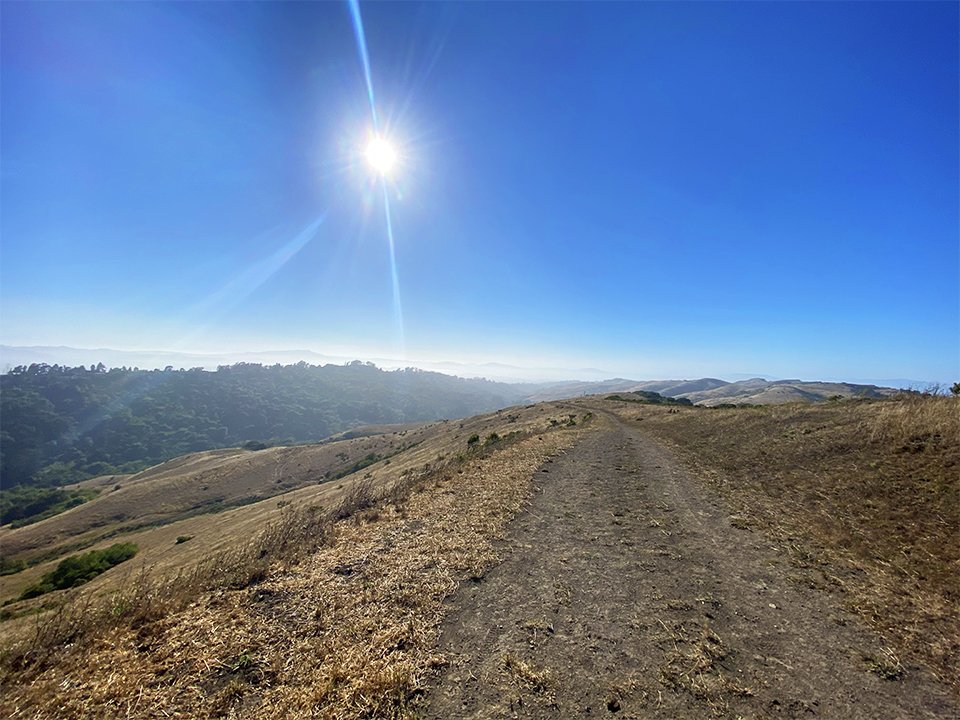 So, I definitely did not put on enough sunblock last week… the watch tan I have developed on my wrist is evidence enough. I think I underestimated the California sun. This is my first time spending the summer outside of the South Texas heat and I cannot complain. The 70 degree highs and the 50 degree lows have given me the ability to explore the Anza Trail at almost any time of day.

This past week was filled with hikes on hikes on hikes. The Juan Bautista de Anza National Historic Trail is over 1,200 miles long and spans over two states and two countries. To say the least, it is HUGE! It would take me over 20 days to walk the whole trail, and that is if it were flat the whole way and if I took no breaks (which you know I would). I have only hiked a little over 38 miles of the Anza Trail myself and mostly concentrated around the East Richmond area, East Berkeley, and some portions in San Francisco.

Having the privilege to work outside and explore the trail, especially during the time of an ever looming pandemic, has been my saving grace. Being out on the trail has connected me to the ground I walk on within my new normal, that is California. Not only have I recognized the privilege I have to be working at a time like this, but I have also come to constantly question the idea behind access to this job and to this trail.

Again, being from Texas, hiking on the little “trails” we had was never an option during the summer because of the extreme heat, but aside from that, the access to hiking trails near my home was non-existent. The effort it took to get out and enjoy the outdoors was tremendous, and I recognize that now that I am in a space where my options are limitless.

But before I get ahead of myself, although I say that my options are limitless they are still not accessible. What do I mean by this? Well first of all in order for me to head out to the Anza Trail, I need to wake up, gather my hiking essentials, get on my bike, bike 5.7 miles uphill, lock up my bike, get out on the trails, start my hike, and hope that I save enough energy to bike the 5.7 miles back home. As for portions of the trail that can only be accessible via driving, are almost completely off limits to me.

In addition to these struggles of access, the Coronavirus also brought another level of restrictions. On May 4th, parks throughout the Bay Area decided to re-open but with restrictions. The San Mateo County Parks Director Nicholas Calderon said that the parks should only be used by people who live close enough to walk or travel a short distance to. The Bay Area Park officials were asking people to only visit the parks that were close to their homes to aid in social distancing and to avoid large crowds. This was so unsettling for me. I immediately thought to myself, “What?! How can they make decisions like that about public spaces? How can they tell the communities that need the recreational areas the most and have the least amount of access to them, that because they do not live close to a park (because historically communities of color have been pushed out of areas with lush green recreational spaces) they may not have access to use it.” According to the Center for American Progress, new data shows that communities of color and low-income communities in the western United States have less open space, parks, and natural area nearby than the overall population in their state. The report was published during the 100th anniversary of the National Park Service and looks to examine the push for more inclusive and accessible public land. The Organic Act of 1872, which was the legislation that created Yellowstone National Park, has a statement that reads “For the Benefit and Enjoyment of the People.” This quote has always lingered in the back of my mind when thinking about the accessibility to National Parks, where at the core value was meant for “everyone” but as history has shown us, this isn’t the way it panned out.

So, every time I wake up in the morning and open my laptop for a video call, every time I get on my bike and head out to the trail, every time I breathe in the fresh air while on a hike, every time I get to sit and write about my experiences, I am grateful and I am thankful, despite some of the small hills of adversity that I need to traverse. I can only hope that the natural world will become colorful again and that my work will turn these colinas into lomitas for those who come after me.

“Everybody needs beauty as well as bread, places to play in and pray in, where Nature may heal and cheer and give strength to body and soul alike.” – John Muir