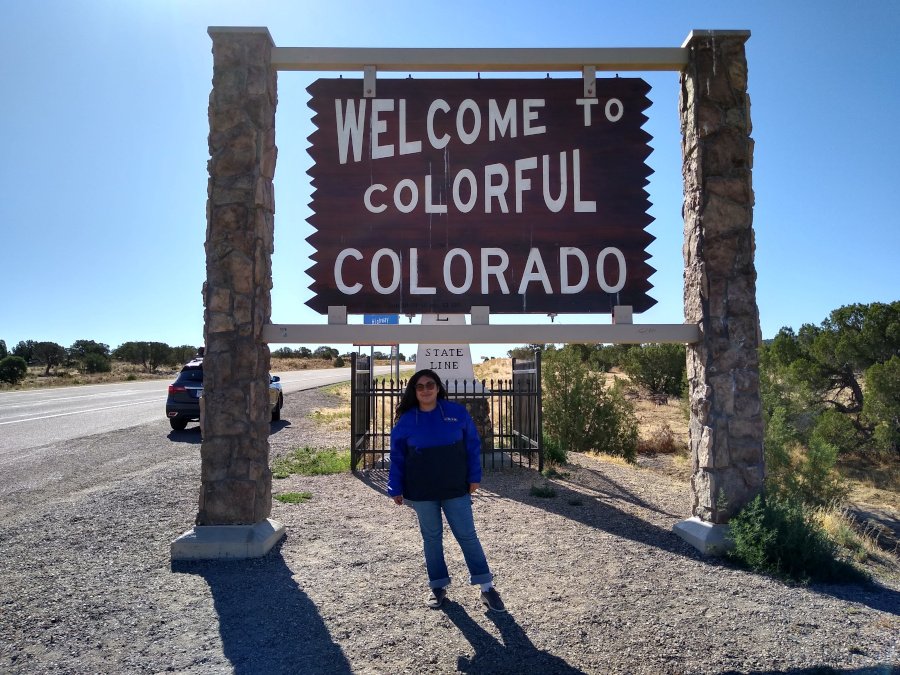 As I said my goodbyes to family, friends and my red-lored Amazon parrot, Bonita, I looked forward to the long journey before me. Just as we encounter obstacles on the road, we also do so in our lives. El camino que llevamos puede estar lleno de obstáculos, pero así es la vida. We must enjoy the trip along the way to our destination, regardless of what happens.

I am thankful for everyone who has helped me throughout my life. I wouldn’t be who I am without the experiences and memories I’ve made, especially if my parents hadn’t decided to make the perilous trek from their hometown of Manzanillo, Colima in Mexico to the U.S. They’ve made numerous sacrifices and have always been supportive of my goals despite their status in this country. Quiero decir muchas gracias a mis padres por todo lo que hicieron por mi. Sin ellos no estuviera la persona quién soy ahora.

Fortunately, my parents are now legal citizens, but I understand the fear of being separated from the ones you love most. Hopefully my story will show others the importance of supporting those who are often voiceless and vulnerable, to achieve their potential. I’m grateful for the Latino Heritage Internship Program, Environment for the Americas, Hispanic Access Foundation, and the National Park Service for investing in young scientists of color such as myself to learn, explore, and enjoy nature. ¡La naturaleza es para todos y tenemos que compartir nuestras historias!

The journey from Riverside, California to Florissant, Colorado took about four days and three nights. I highly recommend taking a long road trip with your loved ones as a way to bond. My boyfriend of five years accompanied me on the road. We met on a geology trip six years ago, and we both recently graduated from UCR with geology degrees. We enjoy off-roading, hiking, camping, and rock hounding. Needless to say, we share a passion for the outdoors and the sciences! For anyone interested in the route we took and where we camped, I have included a map with pins in this blog. We mainly just followed the route listed on Google Maps to get from point A to point B. 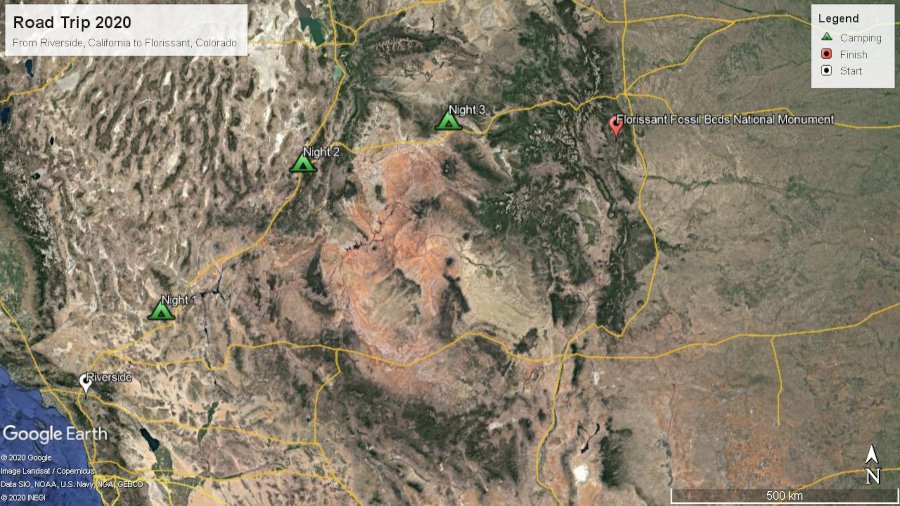 The first night we camped just outside of the Mojave National Preserve on BLM land (Bureau of Land Management) about 14 miles north of the Cima Dome and Volcanic Field, and about an hour southwest of Las Vegas, Nevada. We were tired from the long day of last-minute packing, so we looked at satellite imagery to find the nearest dirt trail off of Excelsior Mine Road, where we could pull over to camp. The desert nights are freezing, so we quickly pitched our tent. In the morning, I noticed a basalt flow which looked almost like obsidian because of its glassy surface. Atop the flow was an old ore processing mill. We hiked a little further and noticed cabins built into the hillsides, remnants of an old mine camp. As a safety precaution, we didn’t venture inside these cabins for obvious reasons (such as collapse). Yet, the construction of these cabins was fascinating. Some were nicer than others, having multiple windows, benches and even screened doors. They also had primitive chimneys. 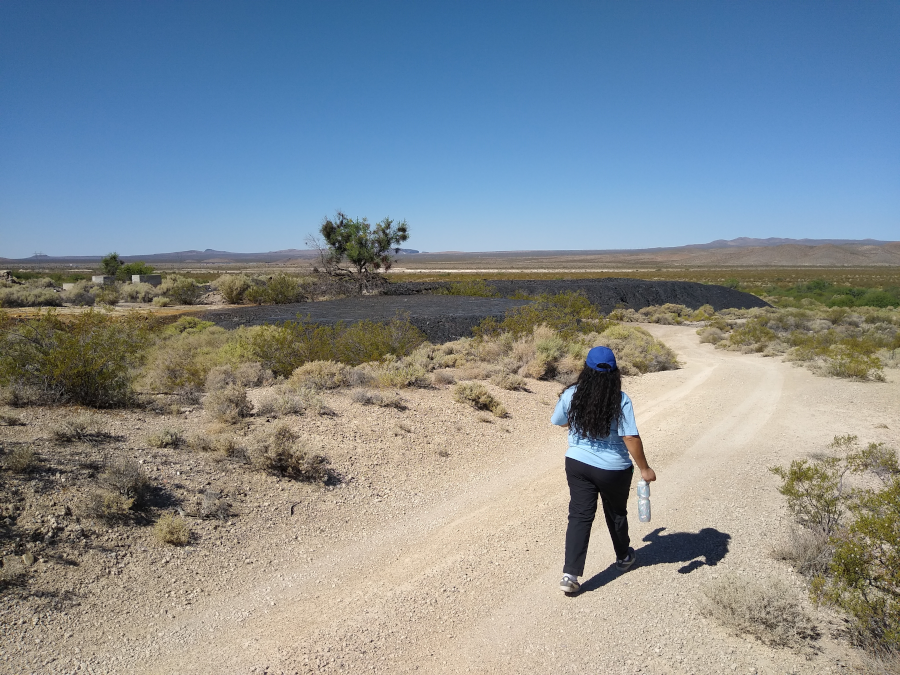 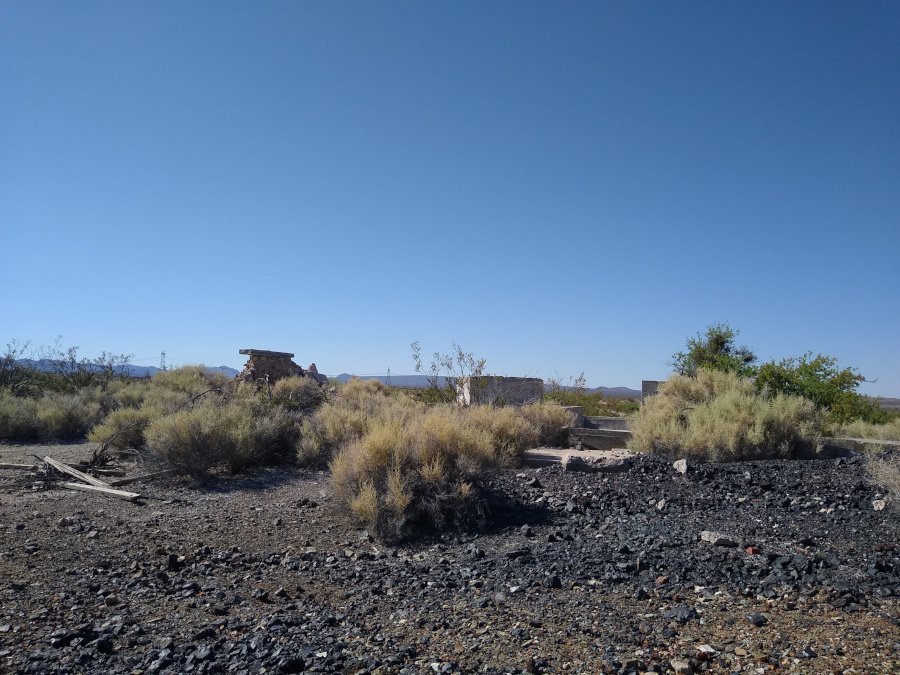 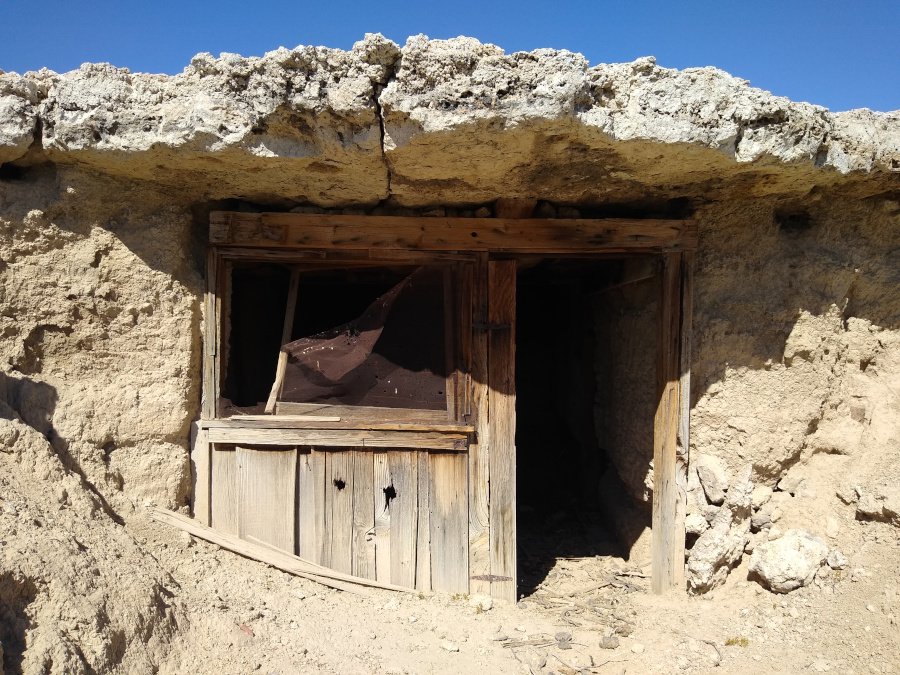 Day two of our trip, we drove through Las Vegas and stopped by the largest Bass Pro Shops store I have ever visited. From there we only stopped to get gas. We drove through Nevada, and northwestern Arizona until…our car started to have issues. 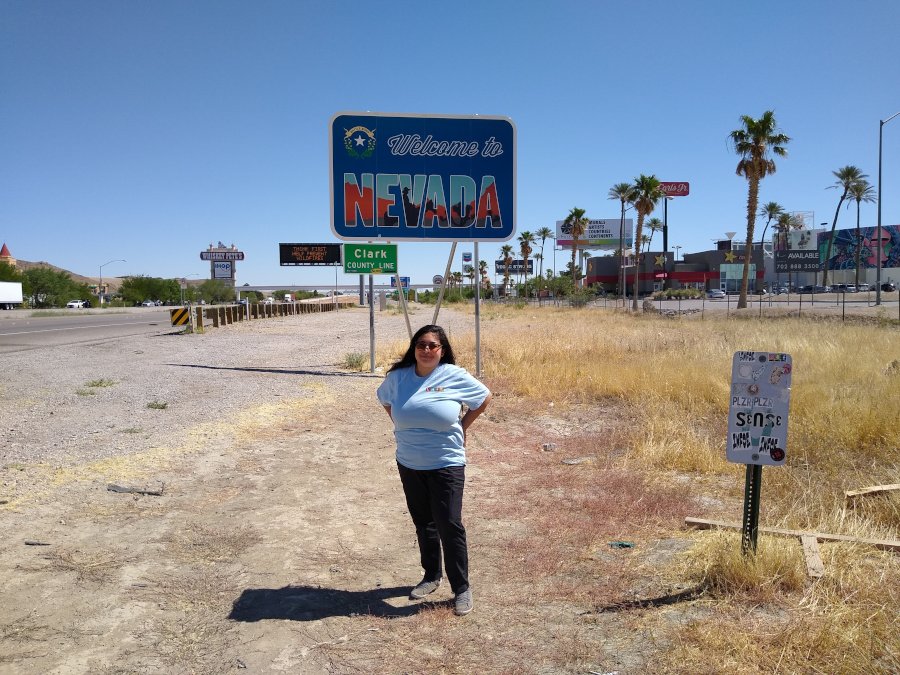 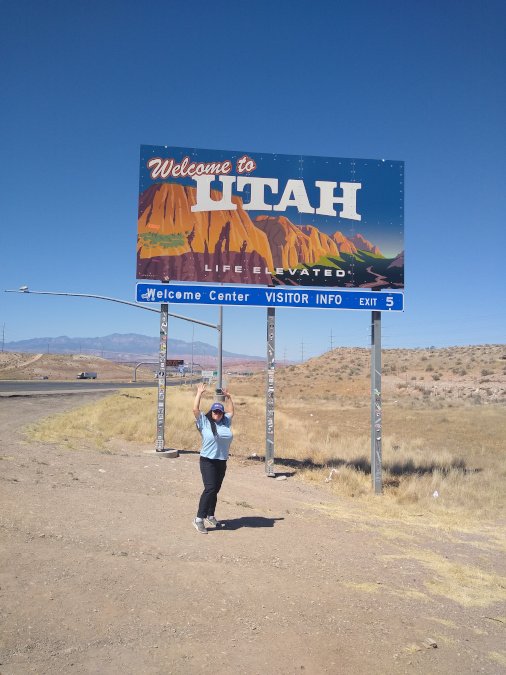 We made it to Beaver, Utah and decided to not go further until we saw a mechanic. Fortunately, there was a AAA auto service center in the Beaver Chevron just off the highway. Since we got there after 5 pm, the mechanic, Rick was busy but he still greeted us and asked what issues we had. We decided to stay in Beaver to resolve the problem, and he even gave us suggestions on where to camp. Our car made it to Fishlake National Forest. We didn’t venture too far and found a nice place to set up for the evening. We even came across very considerate cows that were grazing in the area. We brought pizza and heated it up in our portable oven (set-up on top of an old Coleman stove). There wasn’t any service, so we hiked uphill in hopes to get a signal after we ate dinner. Along the dirt road, someone had littered the entire hillside with toilet paper and baby wipes. We enjoy keeping nature natural, so we took the time to pick up the trash. Remember to recreate responsibly and leave no trace! 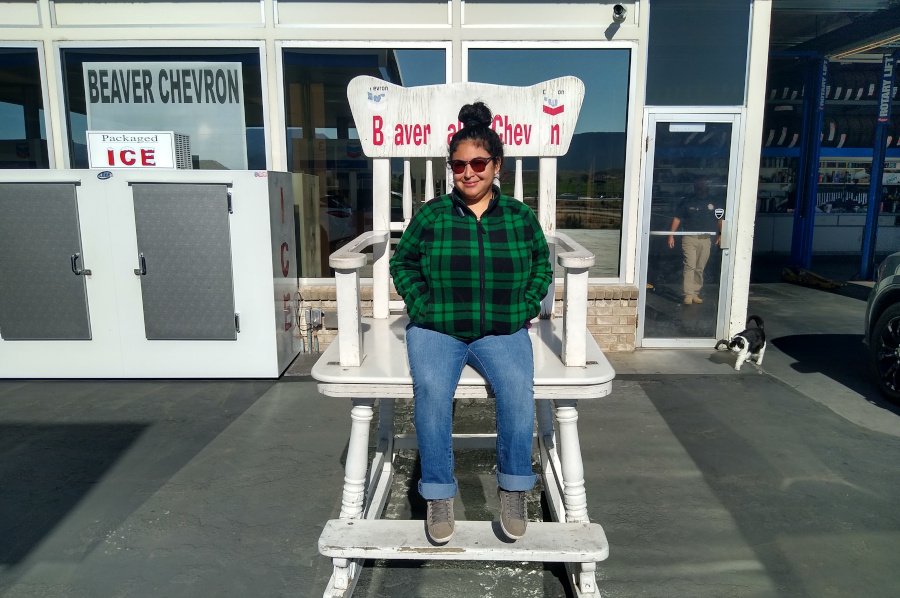 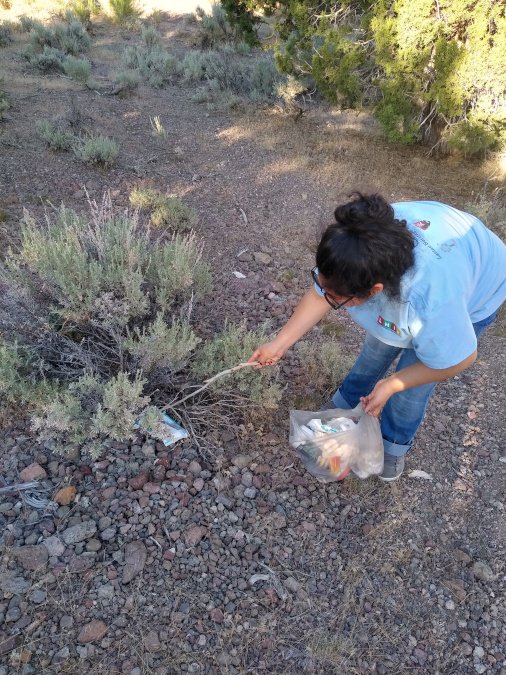 The following day, Rick got us back on the road. We continued driving through Utah, and stopped at Salina which was known for its abundant salt deposits, hence the name. We continued driving east, until we decided to camp on BLM land near Westwater, Utah along the Mel’s loop singletrack, just an hour west of Grand Junction, Colorado. When the sun rose, we noticed a sandstone outcrop and decided to explore. Somehow, our internal compass took us to unique locations where we could appreciate the geology. 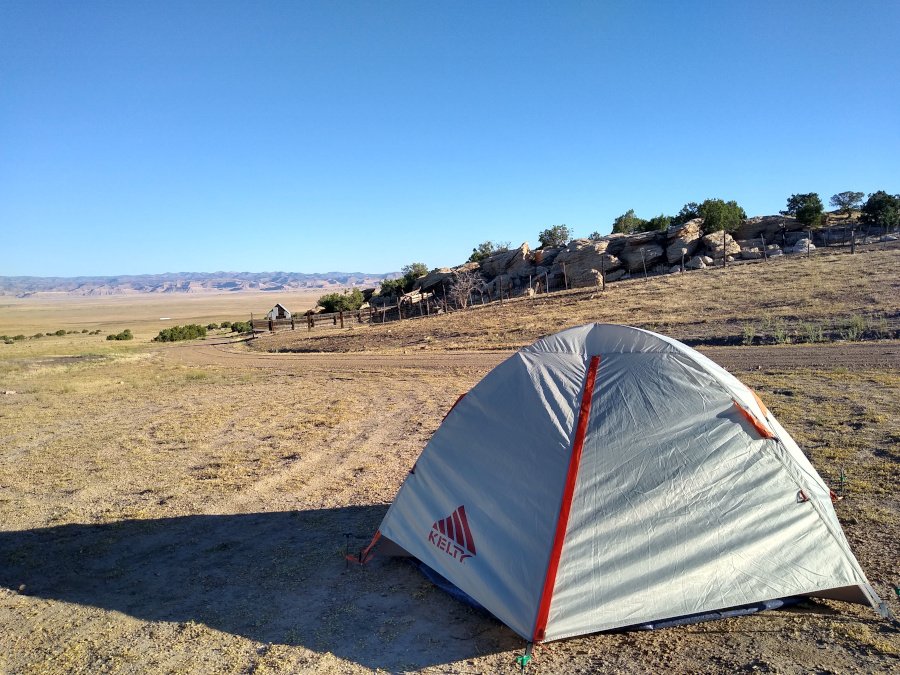 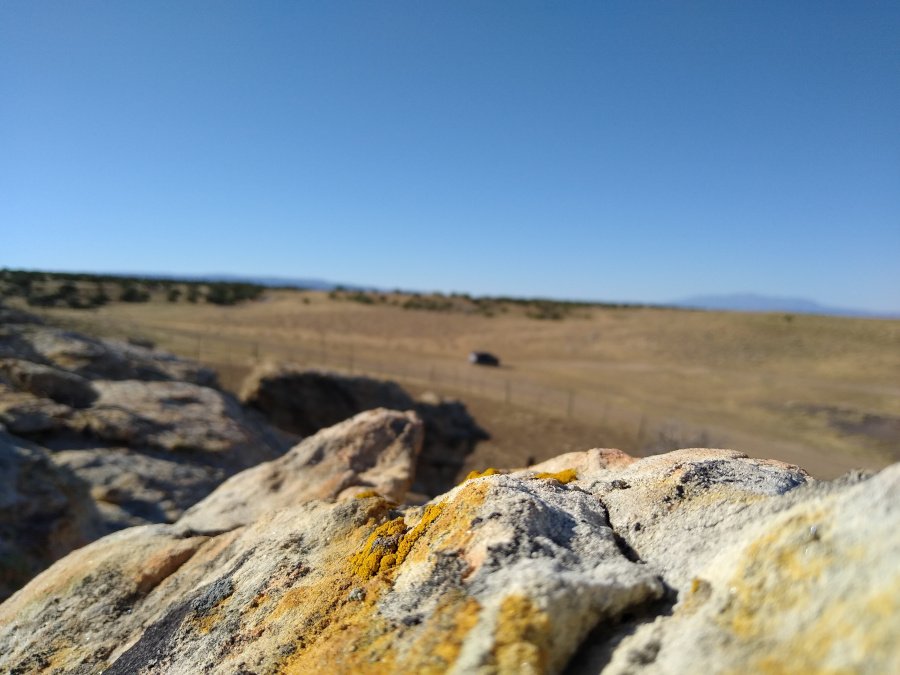 We got back on the road shortly after, and I was relieved when we finally reached the Utah-Colorado state line. From there we only stopped at a few places such as the scenic overlook near Gypsum and at Hoosier Pass, the Continental Divide. During the drive through the White River National Forest, while I had service I listened in on LHIP’s guest speaker Juan Martinez discuss the importance of diversity, equality and inclusivity in our public spaces. His talk was definitely inspirational considering that I was headed for Teller County which has very few minority groups. 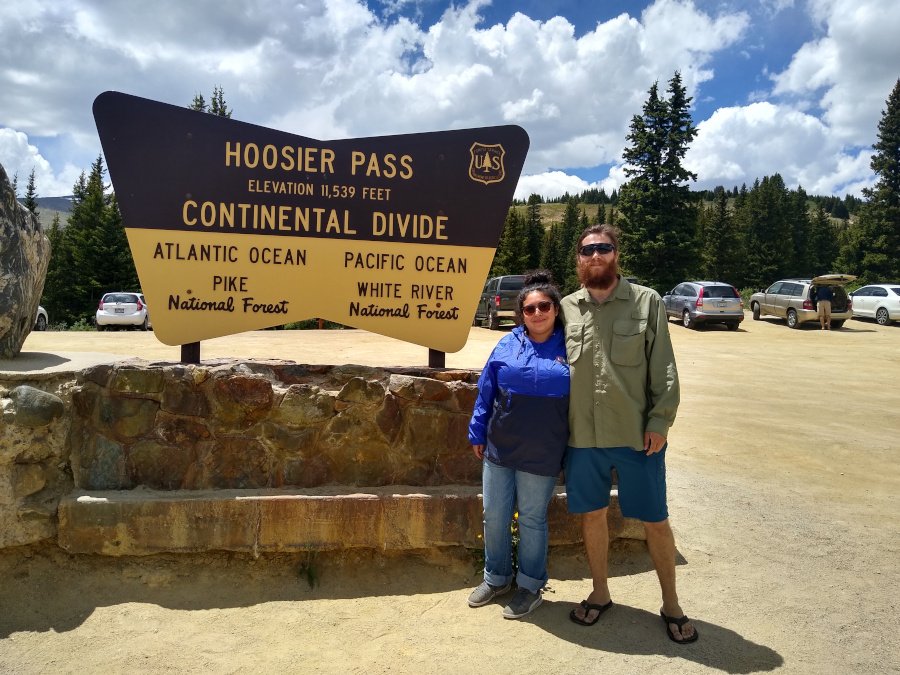 As I arrived closer to my new home, I stopped to take pictures in front of the Florissant Fossil Beds National Monument sign. My new mountain getaway is rural to say the least, our closest neighbors are definitely wild! 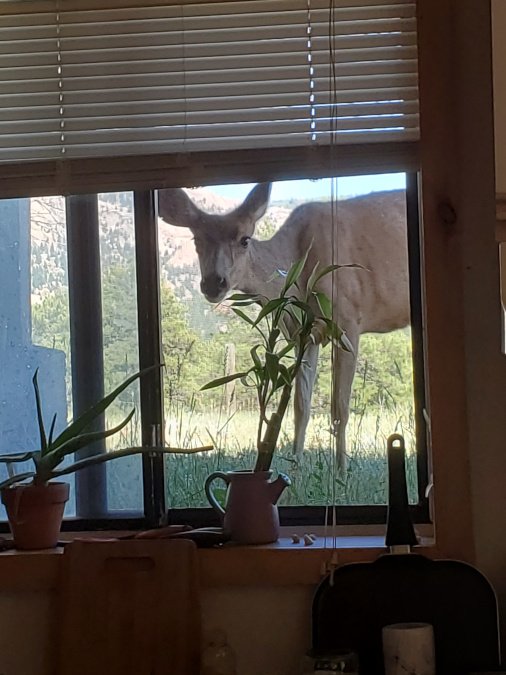