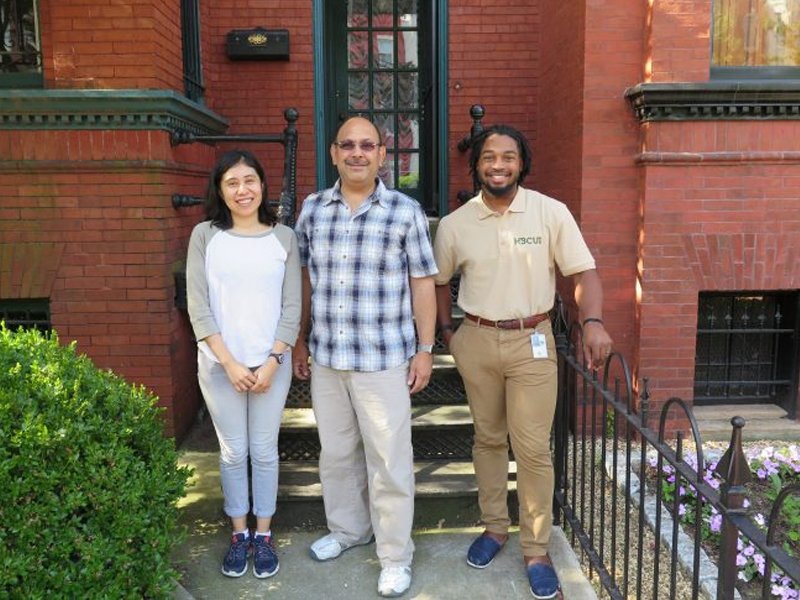 Posted at 00:31h in Blog by Emelyn Najera 0 Comments
0 Likes

At the Historic American Building Survey (HABS), documentation begins with comprehensive fieldwork of the structure in question. The second project that my team and I worked on documenting this summer was a traditional nineteenth-century DC row house located on T Street, near the hustle and bustle of the U Street Corridor.

“1524 T Street NW”, as the project became known, was built as part of a seven house row, consequently it shares many design quantities to its adjacent structures. Commonalities among the row houses included their brick construction and intricate brick ornamentation on their façade, a common pattern of X and O tiles is displayed above a few windows. It’s worth noting that with a span of seventeen feet and a height of two-stories, the row house is unexpectedly small. Bay windows at the front of the house coupled with receding walls and large windows throughout, maximize the availability of fresh air and light within the structure. In fact, the row’s architect ensured that every single room, including the bathrooms, had a window. The inclusion of bay windows in the row’s construction exemplified a design feature popularized in DC in the late nineteenth century, as amended zoning laws permitted homeowners to take advantage of available public space. Except for slight modifications, such as the conversion of a bedroom into a master bathroom on the second floor, the property of 1524 T Street had retained much of its original design, making it an excellent candidate for documentation.

The previous experience of documenting a mid-century modern house at Hollin Hills provided a jumping point to the more complicated measurement and details that were to be recorded in the traditional row house. As we had previously done with our first project, my team and I began the process of documentation by creating detailed floor plans of every space in the house. This new project was significantly larger than the property at Hollin Hills, thus we divided the work between the two floors. Afterwards, we proceeded to work together to measure and annotate our sketches. It was at this point of the project that I had the opportunity to practice recording vertical measurements with a curious tool called a Pogo. While Hollin Hills Unit No. 5b had been composed of straight lines, right angles, and rectangular silhouettes; from its fireplaces to the moldings at every window and entryway, the row house was chock-full of intricate details.  My team and I used molding combs to attempt to accurately capture and record these smaller details, and as we had previously done at the last site, we had assistance in using the Leica laser scanner to capture the details and measurements that were beyond our reach. Ultimately, 1524 T Street provided quite the challenge, but with time and teamwork we managed to gather all the necessary information to begin drafting our final drawings.