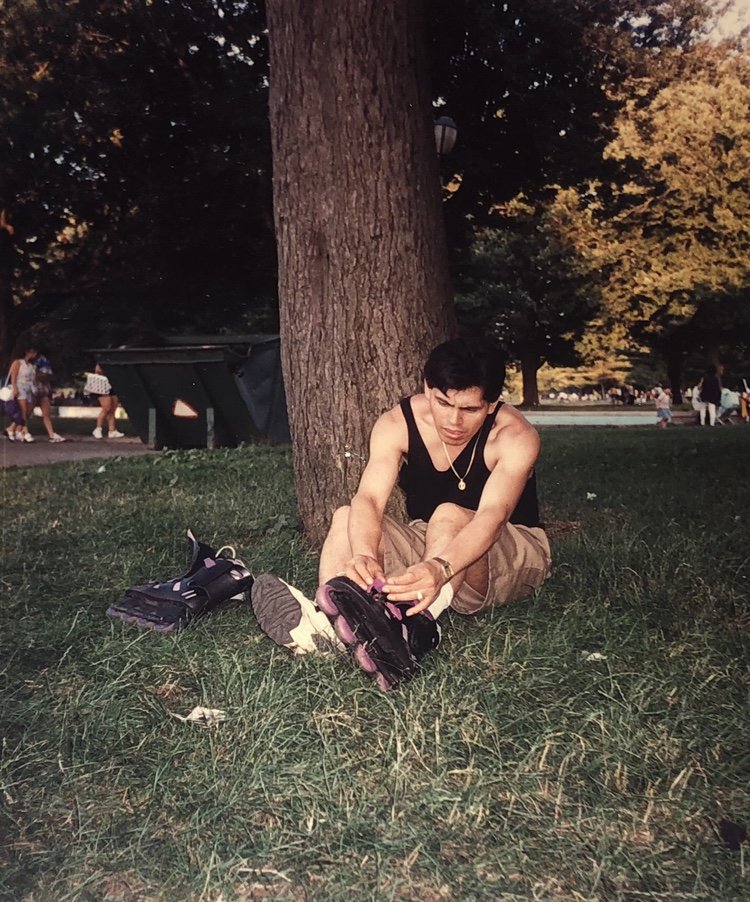 Hola everyone! My name is America Avila and I will be an intern for Salem Maritime and Saugus Ironworks National Historic Sites for the 2019 Latino Heritage Internship Program associated with the National Park Service (NPS) and Hispanic Access Foundation (HAF).

I was born and raised in Yonkers, New York, land of the Lenape people. My father who migrated from Azogues, Ecuador to the United States of America loves the outdoors. Whenever my dad had a day off of work he would throw our rollerblades into the trunk of his white Ford and drive our family to different sites like Bear Mountain State Park.

My favorite picture of my dad is of him sitting on the grass of a park in Queens, New York wearing his black tank top and cargo shorts as he tied the laces of his purple wheeled rollerblades in concentration. During my second semester of college, I decided to take an ice skating class to meet my PE requirement and because I thought it would be easy since it’s similar to roller blading. Coming back from class one day, I called my dad crying because I had to hold onto the wall and everyone else in my class was gliding on the ice so easily. Whenever I’m talking to my dad he likes to make up stories as a joke but this time he was serious. When I was younger, my dad stopped rollerblading but I never asked him why. During this phone call he told me that he used to go to the same park every Saturday and bust his butt in front of everyone and he stopped going because the people around him laughed and pointed at him and he was embarrassed. He told me that he regretted it because he loved it and at least he was doing something. So, my next class I let go of the wall. By the end of the semester, I wasn’t Tonya Harding or Jonathan Van Ness but I did learn some gnarly ice skating skills and it’s now my favorite pastime. For my dad, I promised that I wasn’t going to stop learning or doing something I was passionate about because someone laughs at me or because I feel embarrassed.

My mom is also a big inspiration to me. She reminds me of a bee and not just because her name is Beatriz, but because she is hard-working, strong and protects her family. My mom is from Veracruz, Mexico. She moved to the United States when she was 20 years old with her sister and always accomplishes everything she put her mind to like learning to play the piano and learning Hebrew and Greek. Being a first-generation student, I was scared about the college process and moving to a new city but my mom always encouraged me to reach for the stars. So, NASA, you’re next.

I just finished my first year of college at SUNY Potsdam in Potsdam, New York, land of the Mohawk people. I am majoring in Environmental Studies and currently trying to decide whether I want to minor in biology, geology, or computer science. Nerd Alert! Being so close to the Adirondacks, I got to explore many of the sites like Lampson Falls, Whiteface Mountain, Massawepie Lake, Tahawus, and Saranac Lake as part of the Adirondack FIG. During my time in Potsdam, I developed a strong value for the environment and began to focus more closely on environmental justice, sustainability and science. When I’m not in the library reading books, I like to be in the outdoors enjoying the immense beauty of nature or hiking, journaling, and collecting rocks. My rock collection is quite impressive. My goal after graduating college is to work in field research and in National Parks to keep growing my already astronomical love for the environment and to continue to be a steward of the environment.