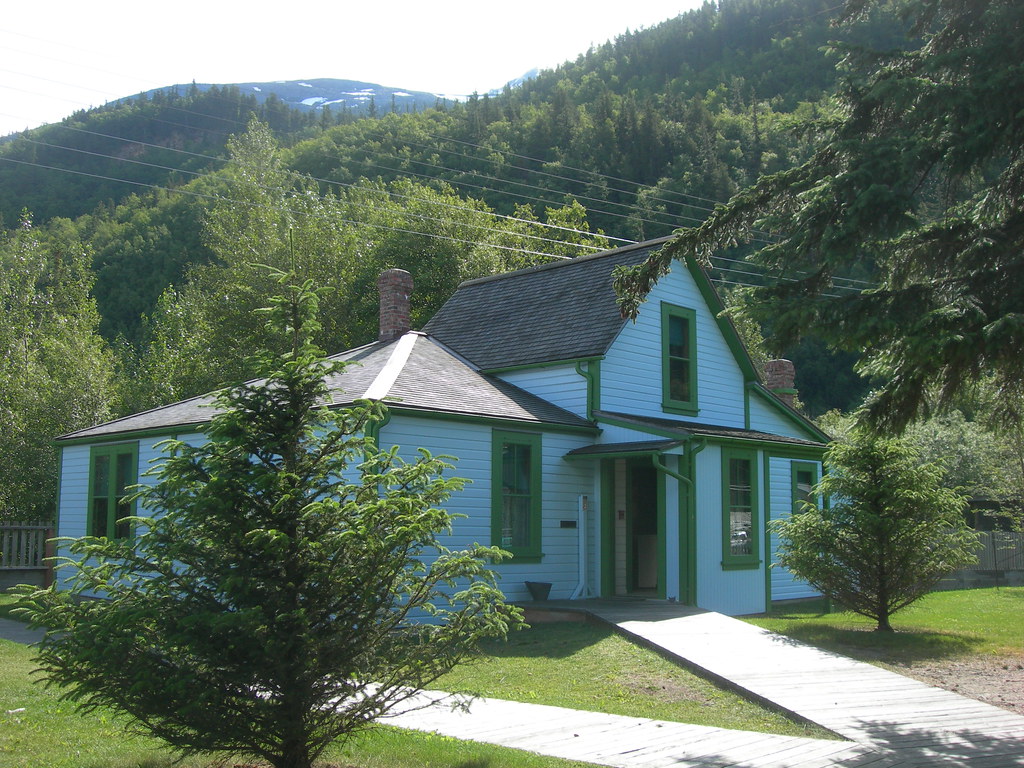 01 Jul Getting To Know the Moore House

When I first got to Skagway, Alaska, I didn’t know the ins and outs of the park very well. I was still getting my bearings, and learning the names, histories, and map locations of the unfamiliar buildings. I remember overhearing a conversation between my housemates about a historic house on the far side of the park called the “Moore House.” Grace, an archaeologist that I live with, was recounting one morning when she was in the Moore House, cleaning and getting ready for visitors.

“I was upstairs, and I heard footsteps walking around downstairs. So I rushed over to see who it was, thinking it was one of the other archaeologists. But no. I was alone.”

The story of the Moore House and the family that occupied it is a fascinating yet tragic one. Captain Moore was an entrepreneur who had traveled the world doing odd jobs before arriving in Skagway, Alaska. In the 1880s, there had been several small finds of gold in the surrounding region, and he speculated that soon, there would be a huge find and it would spark a gold rush – and he wanted to be ready for when it happened. He filed a claim with the U.S. government for 160 acres of land, established his own homestead, and even built a windmill and a port. Moore went so far as attempting to name his city “Mooresville,” but the name didn’t exactly stick. In 1897, Moore was proven right. Gold was struck in the Klondike region of the Yukon Territory and people from all over the world rushed to try their hand at instantaneous wealth. In a matter of days, Skagway bloomed into the boomtown of William Moore’s dreams.

William Moore had a son, Ben Moore. When Ben was 20, he attended a party with other wealthy, aristocratic families in the mix: including Tlingit families that had been made wealthy through trade with the Canadian interior and with foreigners. It was at this party that he spotted Klinget-sai-yet, then aged 14. In his diary, Skagway in Days Primeval, he notes:

“The men who took actual part in the dance vied hard with each other to make the most impression among the large audience. While standing there taking all this in … I happened to glance up to a door that had just been opened … and two young girls came out; one apparently fourteen or fifteen years old, quite light of complexion, of somewhat delicate appearance, and with long black hair. In fact she looked pretty, refined and modest, and in a way above any of her class I had yet seen. She saw me at the same time I saw her, and after we held each other’s gaze for a moment, she… ran quickly back into the room. I became immediately interested in this little girl and curious to know all about her. I was lonesome and yearning for companionship from the opposite sex,” (136).

Soon after this first encounter, they were married. Ben renamed her Elizabeth “Minnie” Moore, after his sister.

The Moore House, in some ways, was a curious and fantastical place. The family had a pet moose named Carnation, which William Moore trained to pull a carriage around town. Carnation was a hot topic around town and frequently found itself in trouble with mules, dogs, and horses belonging to other townspeople. The Daily Alaskan writes on March 23rd, 1900:

“All idle eyes in the business center of the city yesterday afternoon were amused by the sight of a fine specimen of the monarch of the woods, a moose, parading in the streets in harness and subservient to man.

The moose is the property of Ben Moore, of Skagway. It is and has for some time been kept in bondage but yet allowed to gambol in Mr. Moore’s yard, but not until the last few days has it been put in harness. Mr. Moore decided to train the animal to drive, and although the work requires patience, there is hope of success.

The moose is eleven months old, as large as a pony and with a head as big and ungainly as a barrel and ears to make the largest and most unshapely government mule green with envy.”

Ultimately, Carnation supposedly died from eating too much clover in the yard. William Moore buried Carnation and mounted its head in his house, above the piano.

The Moore lawn was home to more than just Carnation the moose. In 1899, Company L of the 25th infantry regiment was sent to Skagway’s neighboring townsite, Dyea to establish law and order and solidify the American border. As an all-Black regiment, they were informally known as the “Buffalo Soldiers.” When their barracks in Dyea burned down in a fire, they moved to Skagway and camped out in tents on the Moore House lawn. While it might be nice to imagine that William Moore invited these guests out of the kindness of his heart, there is reason to believe that he was heavily incentivized to allow the U.S. army to live on his property in order to protect against frequent squatters on his land. Eventually, he won a lawsuit against those who illegally lived on his homestead and was awarded 25% of what he lost.

Although the Moore family was extravagantly wealthy, that did not mean they were without hardship. Klinget-sai-yet’s indigenous identity made the Moore marriage a multi-racial one, which deeply upset William Moore and was out of line with post-Victorian era social norms. Klinget-sai-yet could no longer speak her native language, go by her real name, or participate in her own culture. Her children were harassed and called racial slurs. She was surrounded by a society that treasured gold, fame, and individuality, rather than one that valued community, family, and land stewardship. To make it worse? This entire family, along with the three Moore grandchildren, all lived under the same roof. This racism that Klinget-sai-yet endured is not a thing of the past. Oftentimes visitors will comment to me, “Wow, she looks like a white woman. She’s so beautiful.” I respond that part of her story is her desperate effort to fit into white society and her fetishization as a light-skinned Native woman. If she looks like a white woman, it’s not an accident.

Inevitably, the Moore’s fell apart. Ben and Klinget-sai-yet moved to Tacoma, Washington, and ultimately divorced due to abuse and mismanagement of money. Klinget-sai-yet moved to British Columbia and ultimately took her own life. Captain Moore moved to Nome in search of his own gold. The Kirmse family, after which the 6th Avenue jewelry store is named, moved in after. The remnants of the Moore’s are contained in their old cabin: beaded artwork beside a Victorian-style piano, fur pelts hanging on patterned walls, moccasins resting by the old rocking chair. Next to a glittering chandelier stands a taxidermied Golden Eagle, staring down at visitors with its beady eyes.

Grace, my archeologist-housemate, would not be the last one to comment on the haunted status of what would soon become my favorite building at Klondike Gold Rush National Historical Park. As I became more and more familiar with the place through staffing it daily, visitors would frequently comment that they got chills when walking through the door frame, or that they could sense spirits in the place. Now I’m not superstitious, but I would be lying if I said that I didn’t sense something, too – on slow visitation days, the quiet hours I spent alone in the house, listening to a particular silence that exists within it, as the eyes of Captain William Moore watch over me.