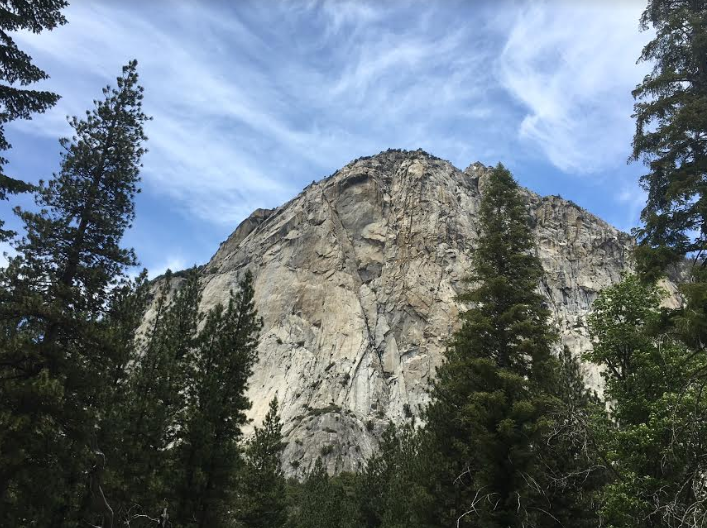 My first day was an adventure to say the least. After checking into my housing, a lightning and thunderstorm hit as I was unpacking my car! As soon as I was safe inside I realized that my roommate went away for the weekend. Totally fine, except there was a sudden *CRACK* *BOOM* and the lights went out. Suddenly I was 200 miles from home in a dark cabin in the woods and completely alone in a thunderstorm. I guess you could say I was a little overwhelmed to learn that I was living out the plot of a horror movie!

Despite the initial fright, I relaxed and found that my new home was beautiful, dynamic, and very alive! I noticed lots of new birds I’ve never seen before and even one deer munching on some grass by the side of the road. My initial panic turned into an awe of the awesomeness of nature!

My first week has been jam packed with exploring both Kings Canyon and Sequoia National Park! The interpretive staff at Kings Canyon NP is very welcoming and helpful so I’m excited to become part of the team. So far, I’ve been doing lots of research about the Sequoia trees in preparation for my first interpretive program this week.

Kings Canyon National Park is located right next to Sequoia National Park! Kings Canyon is about 97% designated wilderness so most of the park isn’t visible unless you go backpacking! The parts that I have seen this week are beautiful. The Sequoia trees are so huge, it’s hard to believe, even with my own eyes! I feel humbled and lucky to be in their presence. There’s also lots of rivers, streams, waterfalls, and cool rock formations. Very excited to get to know this place more and more.