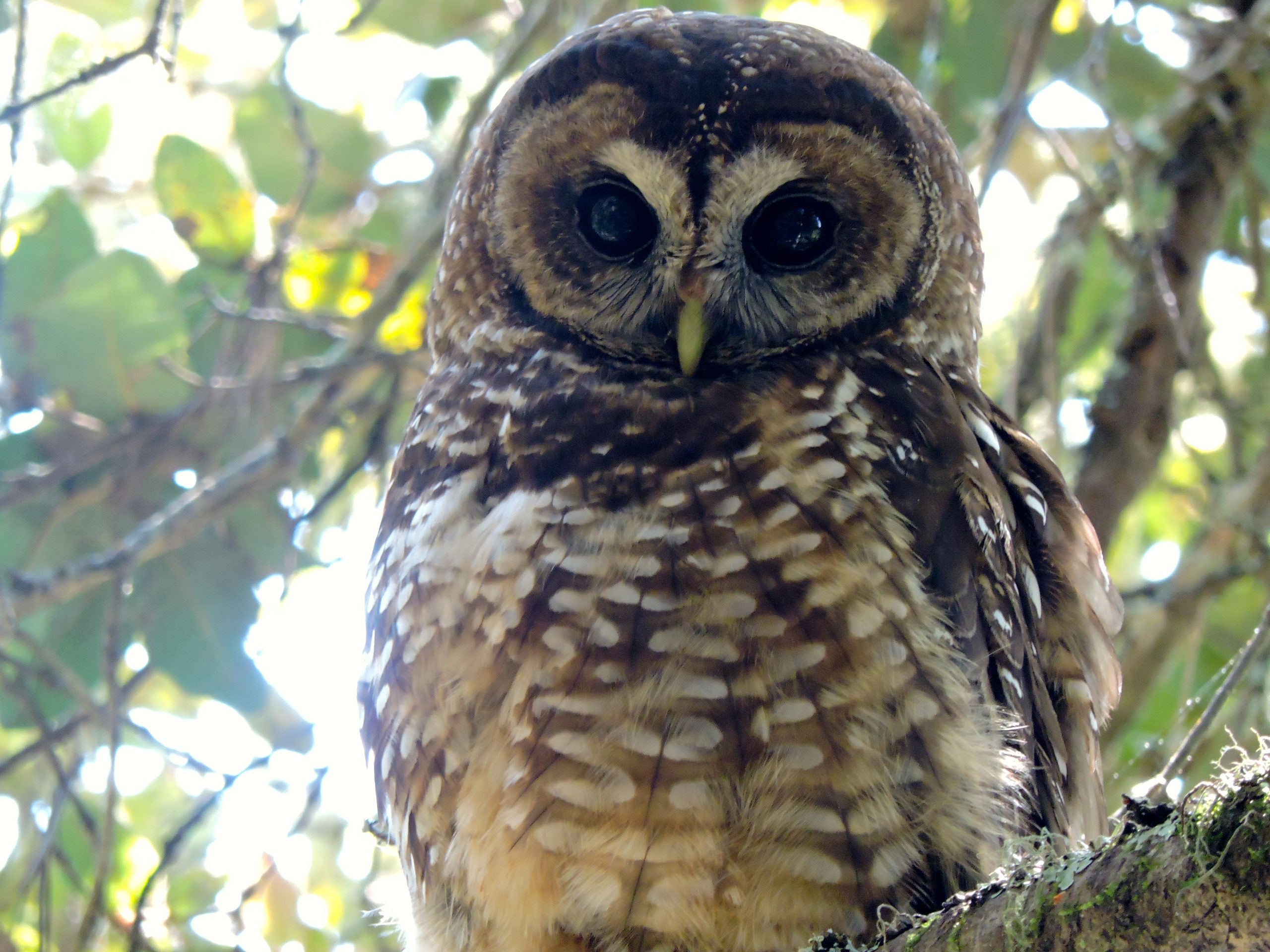 Point Reyes National Seashore houses an incredible amount of wildlife diversity that includes elephant seals, the endemic Tule elks, and black oystercatchers to name a few (I wish I could list all the animals I have seen, but I’ll be kind to the readers). If you have a particular animal you have been looking forward to seeing and adding to your list, Point Reyes will likely offer the opportunity to spot it. Luckily for me, one of my favorite groups of animals is well represented in the area, these fall under the order Strigiformes; the owls (from Barn Owls to Northern Saw-whet owls). I have come to appreciate all species of birds specially over the last few years, but I have a soft-spot for owls (it could be because of their morphology and behavior, their hooting and a few personal experiences doing releases).

Biologists at the park conduct a wide variety of studies and one of the most intriguing is the Northern Spotted Owl study. This owl is currently recognized as a threatened species mainly because of the increasing numbers of barred owls that have expanded their territories to the Northwest where they outcompete the spotted owls. During my interview for this position, Ranger Arreglo mentioned that the internship provides an opportunity to join a biologist to perform an owl survey and of course I was very excited.

After a couple of weeks into the internship, the schedules finally lined-up to join Taylor Ellis the park’s wildlife technician. I was warned by my supervisor that the survey would likely occur in highly vegetated areas covered with poison oak and stinging nettle (the perks of hiking off-trail), so I thought I had to bubble wrap myself to make it out of the hike rash-free. After a quick drive to an undisclosed location we grabbed our backpacks and entered a wild trail to search for owls that had not been observed during this years survey. For a second the trail was clear, but that changed quickly. I found myself dodging branches, tripping on fallen trees, scanning for poison oak and making sure I kept up with Taylor who is a master of the terrain. One of the surveying methods to find owls is to play recorded calls of both males and females. This can either attract them to the area or can also force them to respond to the calls. The latter happened. After playing the recorded call we heard a response and Taylor quickly pointed out the location and we continued the hike towards that area. The terrain did not get any easier, we descended and ascended hills with overpopulated communities of plants and we eventually crossed and walked along a creek of water. We continued playing the recording and Taylor pointed out a few key sightings that indicate the presence of owls–large amounts of wash-up (bird defecation) left on trees and on plants. Taylor played the recording once more and we waited. I had been part of an owl survey done at night during my wildlife techniques class trip this last spring and we did not spot a single owl. The interesting part of the owl survey with Taylor, it happened during the day. I tried to prepare myself to avoid any disappointment if we did not spot a single owl.

It finally happened, a Northern Spotted Owl (female) flew and perched on a tree about 4 meters above us. It was not shy at all (which surprised me). It remained on the tree as it assessed the situation, at this point I was losing it. Here I was in front of a threatened species, one of my favorite animals and not during the night (owl in the day). I contained myself for the most part, but to say that I was excited is an understatement. A few minutes later, Taylor encountered another owl (a male) just a few meters away, at this point I thought this was my favorite wildlife experience I ever had. Taylor went on to collect the data: recording of the location, individuals observed and most importantly if there was a nest that belonged to the pair (but we did not find one). The protocol of Northern Spotted Owls surveys includes a procedure called mousing in which a live mouse is offered (placed on a branch) and this can help determine whether there is a nest in the area if the owl takes it back to its nest. If I thought I had seen it all, I was mistaken. Taylor placed a rodent on a branch and shortly after, I was able to witness how owls capture and consume their prey. This was an amazing experience. Later that day we hiked into another location where a nest had been observed and of course we were once again fortunate to see another pair of owls and their chick on the nest. Again, what an incredible experience.

People often remember a defining moment that inspired to them to pursue their career. I always think about trips to the zoo and my camping trips at Yosemite; these moments have definitely channeled me into the world of natural sciences. Now that I have had a bit of time to reflect on everything that I was able to experience during the survey–this has become one of the moments I am referring to. This owl survey has had a monumental impact on me. It has inspired so much to continue working hard to complete my wildlife and vertebrate ecology degree and to continue my education after that. This experience, like the snowy plover survey has helped me confirm that I want to perform field biology. Seeing the owl a few meters away from me left me speechless, it was a life changing experience that I will never forget.

Once again, I will end up the blog with a big thank you to some amazing people. Thank you to Taylor Ellis for allowing me to join his owl survey, you have inspired me so much. Thank you to my supervisor Ranger Arreglo for arranging all these opportunities, I can’t thank you enough. Thank you to my colega, Mosaics intern Diego Morales for joining me on all these unexpected adventures, I’m happy I have shared these moments with you. Thank you to Jenn and the amazing staff at CWC for inspiring me to work with wildlife. A final thank you to my Humboldt family and future wildlife biologists Janett and Olivia (and everyone else), your support makes a difference.