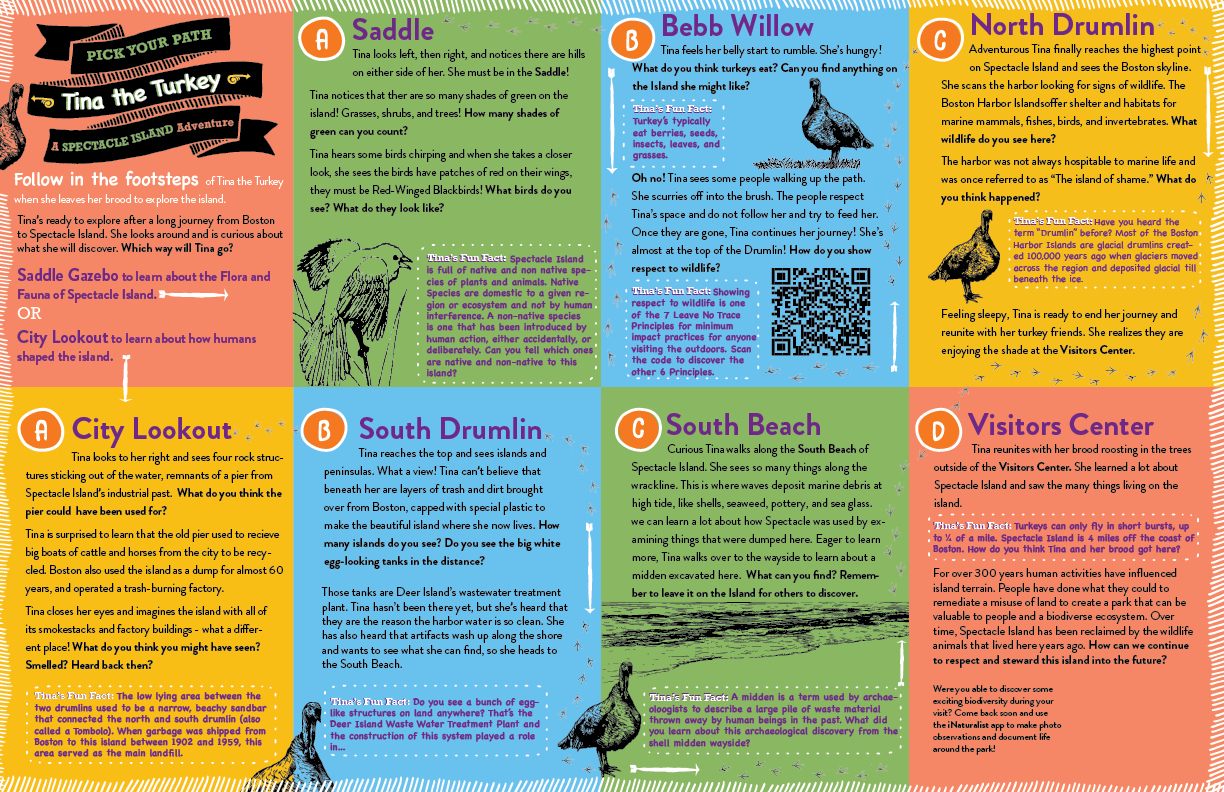 One of my main projects this summer was to work on a self-guided material series called “Pick Your Path.” The purpose of the “Pick Your Path” activity series is to help with engagement and accessibility by providing a way for visitors to explore some of the Boston Harbor Islands independently. Visitors can use the map to explore the island by reading the story and choosing different paths. Before my internship, only two “Pick Your Path” map activities existed for one island, Georges Island. The goal for me this summer was to create a map activity for Spectacle Island that compliments the other map activities that already exist for Georges Island. Eventually, the Boston Harbor Islands National and State Park will have “Pick Your Path” activities on all the islands open to visitors.

Creating this map activity was filled with trial and error and is still ongoing. Going into this project, I wanted the Spectacle Island activity to compliment and resemble the Georges Island map series but also be unique to differentiate between the two islands. I was able to use the same template as the Georges Island activity but changed the colors slightly so that it looks different. The text and template were created and designed in Adobe InDesign, and the graphics were created in Adobe Illustrator.

The turkey graphic went through many phases. First, I met with partners on the project to discuss what we wanted Tina to look like. I thought of making Tina more of a cartoon character with big eyes and a friendly smile. Quickly, I scratched that idea because I didn’t want to make the turkey look too exaggerated. Thinking of who the audience would be, youth (roughly ages 6+), I wanted to make sure that it wasn’t too cartoon-like and friendly looking so that people wouldn’t be encouraged to approach or touch them. We want visitors and people on the island to enjoy the animals but leave them alone in their habitat. Instead, I decided to make Tina more realistic in a sketch style similar to the graphic style of the Georges Island activities. I first looked up a picture of a turkey and roughly sketched it out using a photo as a reference. After sketching it out on paper, I took a picture of the sketch and uploaded it to my computer, where I imported it onto Illustrator. Once uploaded, I chose the ‘image trace’ tool, which traces any image giving a line sketch. Image trace has many different effects, but for this graphic, I chose a simple black and white line sketch. Once I traced the image and had the line sketch, I filled in all the details. I used the line and pencil tool to fill in any gaps the image trace didn’t get. Lastly, I put the smudge stick and graphic pen effect on it from the effect gallery to get the rough sketch look. After all this work, I realized I drew a male turkey instead of a female turkey, so I had to repeat the process, sketching a female turkey this time.

There are a lot of turkeys living and seen on Spectacle Island, and as an integral part of the animals on Island, the name of the map activity is “Tina the Turkey.” Visitors can follow in her footsteps to learn about nature on Spectacle or the human impact. Creating the story path for Tina was done in collaboration with a few people on my team with input from our partners on the Islands and the state of Massachusetts Department of Conservation and Recreation (DCR). The hardest part about creating the story was trying to fit all of Spectacle’s history. We wanted the map to be printable and accessible, so space was a limiting factor. We went through many different versions of the story, cutting or condensing certain parts so that they would fit but still make sense. After rearranging text and changing the story, we landed on the version we have right now. Another limiting factor for me was being new to the Boston area and never having heard of the islands before my internship. It was hard to work on the story when I had only just learned about Spectacle and its history. I had a lot of help from two of my coworkers, Jen Antocci and Cathy Radonic, who worked on the story and added a lot of detail despite the limited space.

For the back of the map, the map of Spectacle already existed, so all I had to do was make it digitally compatible to import onto InDesign. To do that, I imported the png file of the map into Photoshop and played around with it to highlight and get rid of the areas I didn’t want. Then, I made the image background transparent and had to go in with the eraser tool on a small setting to erase the parts that didn’t get turned transparent. After I finished this process, it was finally ready to import into InDesign. For the blue background watercolor gradient, I traced the map using the line and arc tool, filled the tracing with blue and used the gradient tool to give it a watercolor look. I also took all the photos at the bottom that serves as identification points for each location.

Overall, this entire process took me about a month and a half. As of now, I am inputting the photos of Spectacle, and we will send them out for partner review hopefully in the next week!

“Find Your Park Anywhere” is a series of Grab and Go activities with a similar purpose as the “Pick Your Path” activities, to help visitors explore the Boston Harbor Islands natural, cultural, and historical highlights independently. These activities can be printed at home, school, etc. and used on the go to educate and engage youth through creating, playing, exploring, hiking, and learning. Each activity teaches youth different values such as compassion, justice, service, and perseverance.

The process of this set of activities was a lot easier to complete than the Spectacle Island “Pick Your Path.” I used the same template as the previous Find Your Park Anywhere activity series, so I didn’t create anything new for this set. Park partners and staff completed the activity content, and the finalized copies were given to me to input onto the InDesign template. Once I input the content, I played with the template by moving some things around, making sure that the content fit and matched the layout of the previous activities. Once finished, I downloaded the templates as PDF files to send out for partner review. Overall, this project didn’t take me longer than 2 or 3 weeks since I worked a little bit on it every day. Hopefully, since it’s out for partner review, they all get approved and can be published on the National Parks of Boston page on the National Park Service website. Once it’s published, anyone can print it and do the activities anywhere!