There are three divisions of volunteers who comprise our effort to gain National Historic Landmark status for Tucson’s old quarter, the Barrio Viejo.  One division – the fieldwork –  is recording the architectural details of each and every building in the quarter. This data is being collected on a block by block basis via a phone or tablet app, and even includes what is considered ‘non-contributing’ properties which are structures that are less than 50 years old. There is another division of data entry specialists who have been helping us assign existing reports such as the Historic American Building Survey (HABS), which was done in the late 1970s in the neighborhood. The third and final division is historical research, which is based and currently meets at the Archives and Research Library of the Arizona Historical Society adjacent to the University of Arizona. This team is currently working on essentially building each neighborhood structure’s genealogy, through collecting data on the varying occupancy reflected in the city’s directories which date back to 1881. 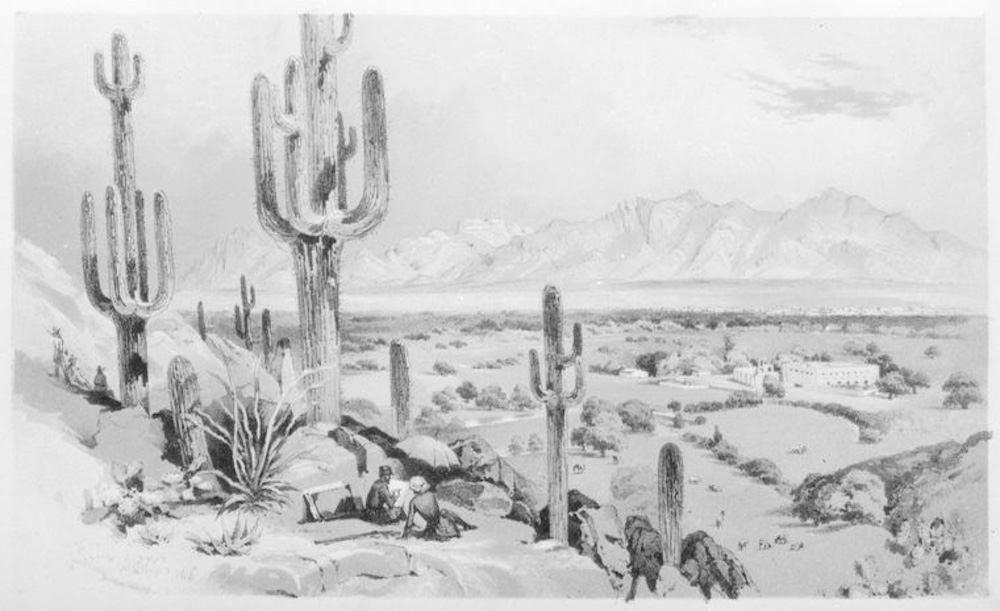 Being able to see some of the collections pertaining to the Barrio Viejo and Tucson history at the Archive has been fascinating. Particularly so when encountering  truly colorful and almost tangible anecdotes about the history of a place that was so connected to the land. One such instance has been the discovery of an interview that took place and was published on 21 June 1873 in the Arizona Citizen newspaper, which was documented by the territorial governor of Arizona at the time,  Anson Safford. This Vermont-born governor had the foresight to record an interview he made with a 100-year old woman at the time who had lived her entire life in Tucson. That woman’s name was Mariana Diaz. It is a colorful history-coming-to-life exercise to ponder her glimpses into living through both the Spanish and Mexican eras from Tucson’s founding in 1775. She describes how: “they [the Apaches] murdered her husband in the field about two miles below Tucson, and that most of her relatives had gone the same way, that she was now left alone…” Mariana also relates a story of a captured boy of a Native American chief who, upon being returned to the father to usher in a period of reconciliation in Spanish-Apache relations, told him “that he liked his captors so well that he desired to live with them” and “the Indians were compelled to return to their mountain home without him.” Dona Mariana also recalls the experience as a girl of two Apache assaults on the Presidio, the enclosed Spanish adobe fortress. “The first time the soldiers and males were nearly all away. The Apaches found it out and took advantage of their absence and attached the town, and would have taken and murdered everyone in it, but for the timely assistance of the Pima and Papago Indian, who came to the rescue in lager numbers and attacking the Apaches on two sides, killed some of them and drove them off.” The Presidio later became the core of the modern city of Tucson. A  Southwestern city whose initial mid 19th century eastern Anglo visitors – lacking an awareness of the seasoned practicality of Hispanic desert traditions and customs – could often not get beyond critique of the Pimeria Alta’s regional architecture, which they disdainfully termed Tucson as a city of  mere “mud boxes.”