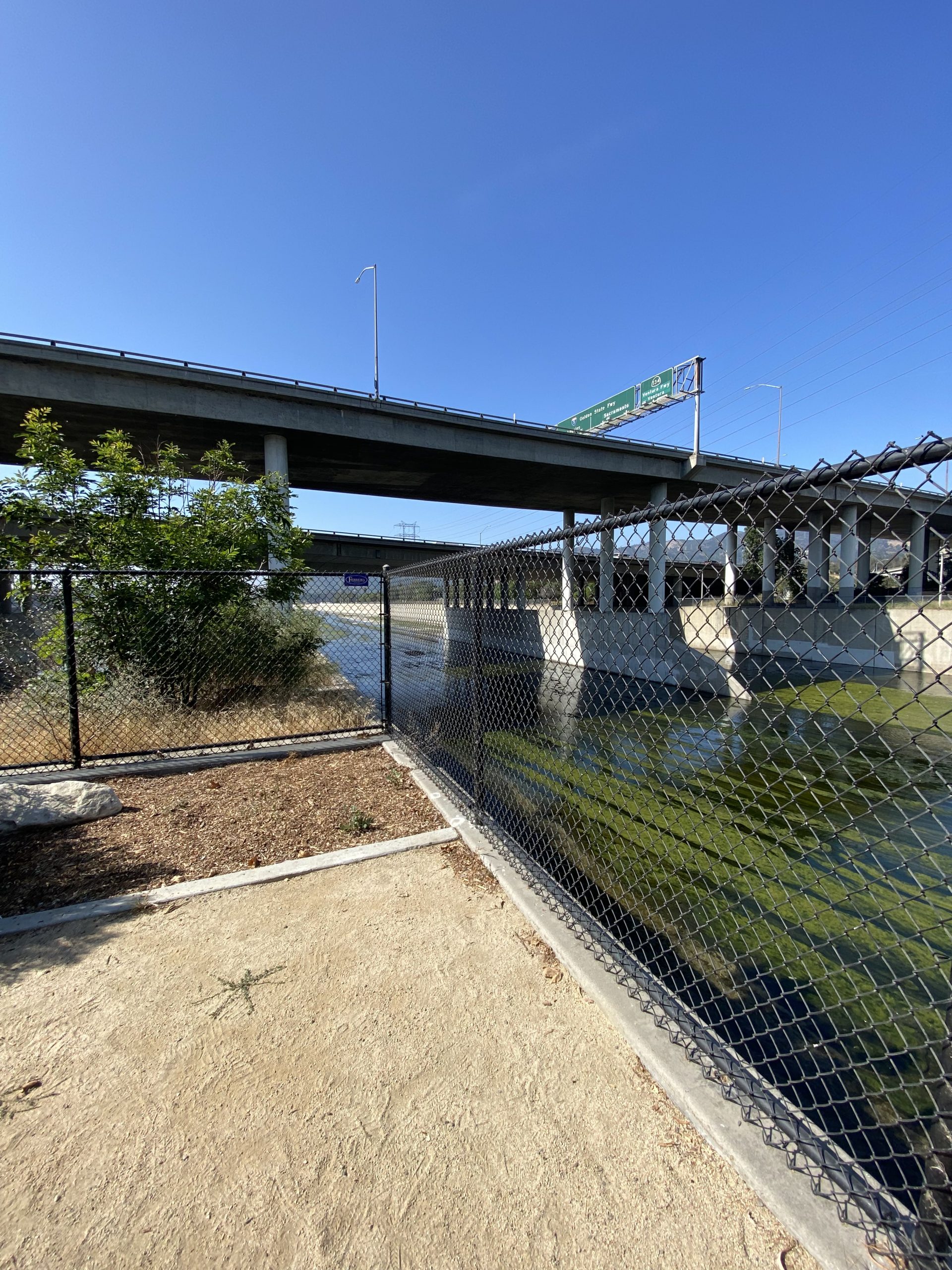 Cars were speeding beyond us. The sounds were indistinguishable, smooth, and fast. It was hot—though not like we were in the desert, it wasn’t bucolic or extreme or particularly noteworthy—and it smelled like gas. On one side of my supervisor and me was Zoo Drive, named for, as one might guess, being the drive that leads up to the Los Angeles Zoo, and on the other side was the Golden State Freeway. Where were we?

Portion of the Anza trail adjacent to the I-5 Freeway.

The Anza Trail runs from Nogales, Arizona to San Francisco, California. It is a memory space, a trail that follows and congeals the 1775-76 journey of Juan Bautista de Anza, who led a group of pobladores from Sinaloa and Sonora in New Spain to California. The Anza expedition is responsible for the foundation of important non-indigenous settlements in California and Arizona, such as the settlement that would become San Francisco or the Mission at San Gabriel. A few hundred years later, the trail passes through a diverse landscape, from urban Los Angeles—my hometown—to rural desert towns in Eastern California and Arizona. Apart from this detached, wide view, the daily moments of walking the trail look a lot like the walk I took this Wednesday with my supervisor, who was visiting from San Francisco.

Welcome to our site! To those who might be reading through the other blogs posted by LHIP interns on this website, my entry probably sticks out. The Anza trail is not a traditional park or memory place: there isn’t a collections storage housing thousands of artifacts, park housing units, or endless fields of accurately-designed historical landscapes. I didn’t have to take a flight to a strange and beautiful land, I’m working from my home. Having previously worked at a more traditional site, Appomattox Court House NHP, seeing how a site whose spatial references are so extensive can still excellently tell stories has been wonderfully eye-opening.

The day-to-day tasks of my job have been varied. The main project I’ve been working on has been conducting research into different non-profits, councils of governments, and bureaucratic designations that might be of interest to the Trail. Such work is different from the type of work many interns at NPS sites complete. Many internships are based on the management of defined resources—it’s about assisting in managing ongoing projects of permanence. In my case, however, my work is different—and it comes from the extensivity of the site I’m working at. My research is, at its core, trail-building. The Anza trail connects distinct regions, cities, sites, and people—it’s a web of relationships. One large lesson I’ve learned from my first two weeks on the job is that, distinctly from other NPS sites, “outreach” or connection with the community is not a discrete project for the Anza Trail. Rather, building relationships means building the Trail itself. Rather than “bringing” people or communities resources, trail-building is a project inherently about vinculations. As the summer progresses, other projects I will work on include creating an ArcGIS StoryMap series along a portion of the Trail, and conducting an inventory of different Anza Trail resources along the LA River. 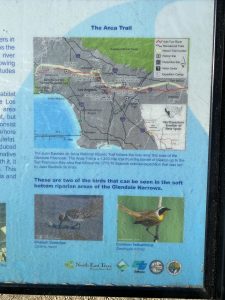 From my vantage point, working on the Trail has been a very valuable and enriching experience. I’m a Chilean-American born and raised in the Mission Hills neighborhood of Los Angeles. It’s a stone’s throw away from the Anza Trail, and it’s where the San Fernando Mission is. In important ways, our neighborhood is spatially centered around the Mission. The Mission is a Spanish colonial site, founded in 1797, and was a site where Spanish and Mexican settler-colonizers extracted the labor of Indigenous people, in particular the Fernandeño Tataviam. Today, at the site of the Mission is a community park and garden, decadent in orderly shrubs and flowers. It’s impossible to pass by the site without seeing girls in quinceañera dresses and a party of chambelanes with color-coordinated ties or paleteros selling to families on the lawn. Stucco walls and red tiles contain within them a social worlding whose history is multi-layered. Our parents, grandparents, and even some of us moved from Latin America to this place; this place in and of itself is a site where what it meant to be Latin American was constructed—physically and metaphorically, through gardens and dispossession.

It was these layers that made me interested in working for the Anza Trail. What does it mean to trail-build along a site that marks a founding Spanish expedition into the lands that became the United States? How do we digest, diversify, tell, represent, and build the histories of those who traveled? How do we do so as people with roots in Latin America, especially those of us who claim heritage in the myriad (neo)-colonialisms, hegemonies, and shock doctrines in the territory? And, what does it mean to take on these tasks when our physical trail is a path alongside the freeway?

This summer, I am excited to take on these questions. As my supervisor, who permanently lives in San Francisco, came to Los Angeles this Wednesday, and we took our walk along the Anza Trail, the task I’m left with is large and conceptual. To paraphrase his words, we often easily attach meaning to place—but, how can we attach meaning to mobility?

I think the first step is to walk. As French philosopher Michel de Certeau explains in his essay Practices of Space, “History begins at the ground level, with footsteps” (de Certeau 129). As Indigenous studies scholar Celia Haig-Brown complicates,

The traces of many footprints lie buried at various levels… Deeply buried, the first human ones are those of Indigenous people… Through colonization, diaspora, and immigration, feet of non-Indigenous peoples have arrived in traditional First Nations territories… (Haig-Brown 10).

I am not yet sure about how meaning can be attached to mobility. But, I do think that there is something meaningful about taking steps along a path by the LA Zoo and the concretized Los Angeles River. Taking steps is a reflective action, it means walking above histories, many of which are fragmented, covered, submerged, and yet others preserved and fossilized. But, I think it is also a generative action: walking is about making and configuring collective memories and what we might have once called history. Walking along the Anza Trail in an urban setting may seem un-historical—but I argue that the Anza trail is an impressive space remembering 300 years of remembrance and still makes sedimentary space for new partnerships, affinities, solidarities, and most importantly, footsteps.

I don’t know what the steps I take this summer will mean, but I do know that I will be building a trail at the end of history.