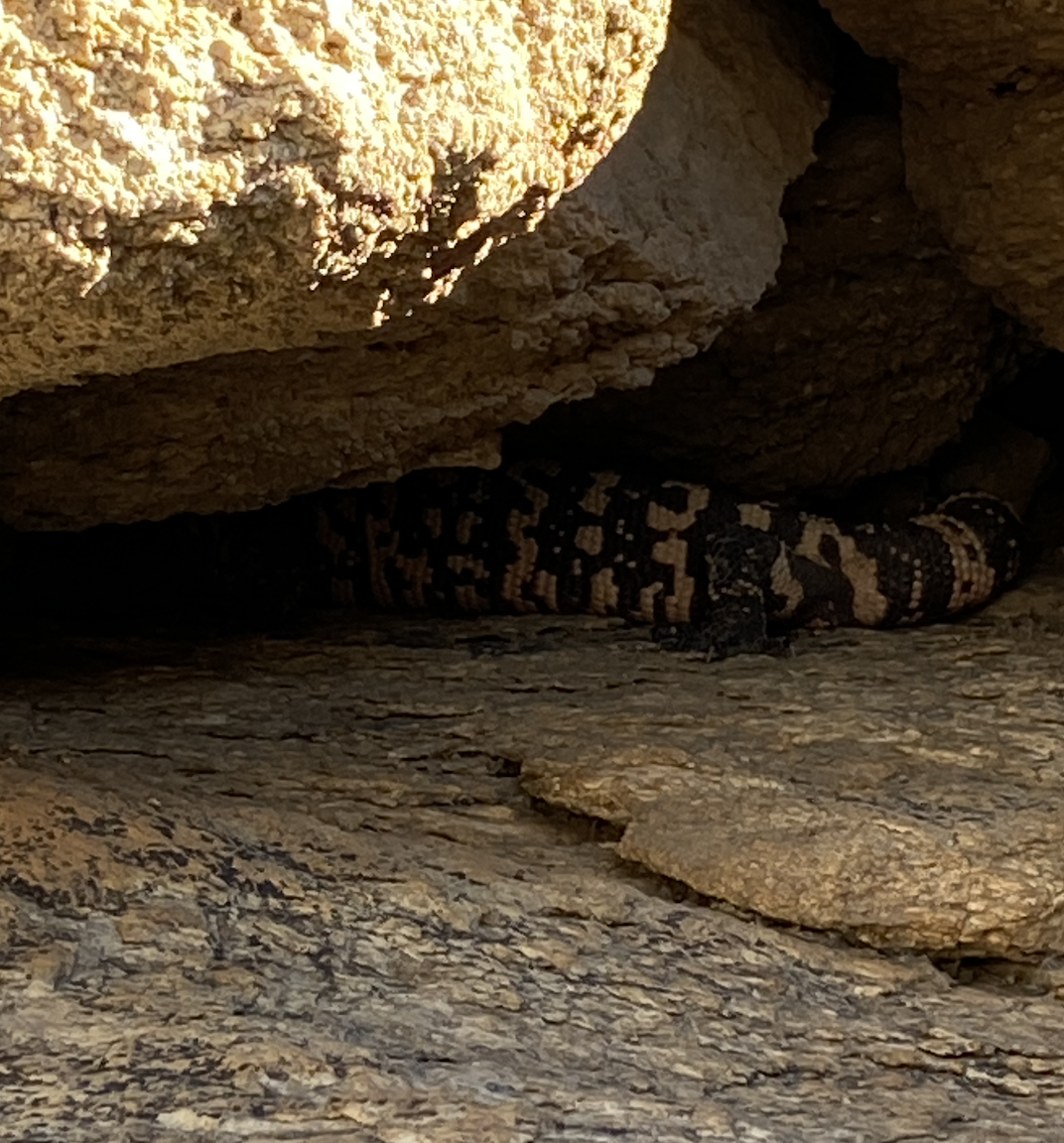 Posted at 16:18h in Uncategorized by Gabriel Mogollón 0 Comments
0 Likes

Life as a Gila Monster is fairly simple: sleep all day with periodic water and snack breaks. On a seemingly ordinary day, a Gila Monster woke up on a hot summer day feeling rather thirsty. Slowly, he lumbered from his fairly inconspicuous hole where he sleeps 16 hours a day. It’s midday and the sun is blazing down on the rocks around the reptile’s crevice. He begins strolling towards the local watering hole hoping that the dry heat hasn’t yet evaporated all the water left from the summer monsoons the year before. He hopes for a few cool gulps of water and if he’s lucky maybe he’ll even find a frog or two. After a long trek over the hill to the north of his home, the Gila Monster begins seeing signs that he is approaching the watering hole. He sees his neighbors, the ground squirrels, rummaging underneath the ocotillo next to the Palo Verde, hopeful for the sweet treat of an Ocotillo fruit. At the sight of the Gila Monster, they smartly scurry off, ensuring they won’t be breakfast for the thirsty lizard. Meandering onward, he catches sight of the blazing sun reflecting off the watering hole. As he approached, he hears the distinct “plop” of the leopard frogs hopping from their spots in the sun into the murky depths of the deceivingly shallow pool, coupled with unfamiliar sounds echoing off the bedrock he has paused at. With some hesitation, he lumbers towards the watering hole, where hidden behind a boulder stand three rather short Saguaros. Their arms seemingly a bit odd. They seem to be blowing in the wind, or wait?! Could they actually be moving?! The strangest part is that these Saguaros seemed to be both moving and making strange sounds. The Gila Monster freezes for an instant, unsure of what to do until he realizes that the strange Saguaros-like creatures aren’t moving towards him. But he hasn’t quite let his guard down. If they were smaller, perhaps he’d be more confident that they weren’t a threat, but the way they tower over the lizard frightens him, so in a surprising burst of speed, he sort of gracefully waddles towards a nearby ledge that is far too small for any of the strange Saguaros to climb under as well. Heart pounding in fear, the reptile can’t bear to risk a peak as he shoves himself as close to the wall as possible. He knows his bite could probably fend them off, but instinctually, it seems like a better bet to just hide and hope they move on quickly. Their oddly jubilant noises begin to wane after a short time, and to the Gila Monsters relief, they eventually go silent and drifted back towards the watering hole. Once he is sure it is safe, he clambers out of his crevice and as quickly as he possible, he makes his way back to his dark, safe hole where he spends the rest of the day recovering from this unprecedented encounter.

This is the Gila Monster I saw about a week ago that gave me my inspiration for this blog post.